Festivals to put Covid forecast and vaccines to test 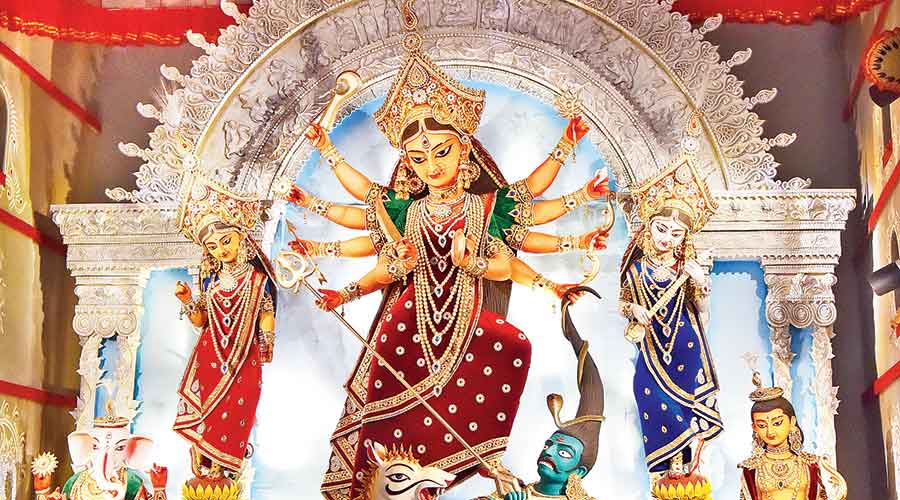 Suruchi Sangha in New Alipore, Calcutta was awarded the Model Puja at the CESC The Telegraph True Spirit Puja 2021. “The concept of the pandal is very good. It is based on the story of kids. They have been missing all the fun because of the pandemic,” said Yutaka Nakamura, consul-general of Japan, one of the judges.
B. Halder
G.S. Mudur   |   New Delhi   |   Published 12.10.21, 03:14 AM

The coming 10 weeks punctuated by festivals will put to test forecasts that Covid-19 in India is unlikely to flare up again into a fresh nationwide wave and the effectiveness of vaccines against severe disease and deaths, experts have said.

Sections of experts believe the October-December period will serve as a “natural experiment” during which people’s behaviour is likely to provide the coronavirus opportunities to spread and the outcomes could illuminate both India’s proximity to endemic Covid-19 and vaccine efficacy.

“We have many options -- attend Durga Puja virtually, attend Ram Leela online, meet your loved ones through video calls to keep them and yourselves safe,” said Lav Agrawal, a joint secretary in the health ministry. “Covid-19 appropriate behaviour will be crucial over the three months.”

Senior officials with the Indian Council of Medical Research, the apex health research agency, have also in recent weeks urged the public to avoid any non-essential travel and venture into large gatherings only if they are fully vaccinated.

Such appeals reflect concerns that although India’s Covid-19 epidemic has shrunk steadily from the second wave’s peak in early May, clusters of infections if unchecked and allowed to spread could give rise to large localised outbreaks.

But 56 districts across the country, including Calcutta, still have large infections and officials say the risk of fresh localised surges persists.

Some public health experts, however, have predicted that the counts of people susceptible to Covid-19 across India has declined substantially with surveys indicating that over 67 per cent of the population is protected through natural infections or vaccination.

“Because such a large proportion of the population is protected either through a history of the infection or through the vaccination, we should not see a large nationwide surge at all,” said T. Jacob John, former head of clinical virology at the Christian Medical College, Vellore.

“If the coronavirus does not change, I expect India is already heading into endemic Covid-19,” John said. Endemicity will be marked by a small number of new cases daily as the virus continues to infect susceptible people but is unable to cause large outbreaks.

Aurnab Ghose, a biologist at the Indian Institute of Science Education and Research, Pune, who is among researchers involved in coronavirus surveillance efforts, said the coming festival season is likely to serve as a “natural experiment” to test forecasts of endemicity and vaccine effectiveness.

“Despite the abundant messaging, we’d expect to see enhanced opportunities for virus transmission during the coming festival weeks,” Ghose said.

Although Maharashtra had imposed restrictions during the Ganesh festivals, there was greater intermingling of people than in earlier weeks, but the state has so far not shown any significant post-festival surge. “We’ve also been looking at the viral genome sequences, and nothing stands out as yet,” Ghose said.

Amid strong evidence that the current Covid-19 vaccines protect against severe disease and deaths, but not so much against the infection itself, experts say there exists a possibility that infection counts will increase if people crowd during festivals.

But if vaccines work as they promised to do, a medical researcher said, any localised clusters of infections that emerge after the festivals should not be accompanied by a proportional increase in deaths.

Even if the infection counts increase, the researcher said, the vaccines should keep the counts of severe disease and deaths in check.

The vaccination campaign has so far administered 73 per cent of the estimated 944 million adults in India one dose and 28 per cent the two doses required for full vaccination.

In 18 states or Union Territories, 80 per cent of the population has received at least one dose. Bengal is among five states where less than 60 per cent of adults have received a single dose.