The agitators contend that instead of being the silver bullet the government is making the new laws out to be, it would turn farmers into labourers 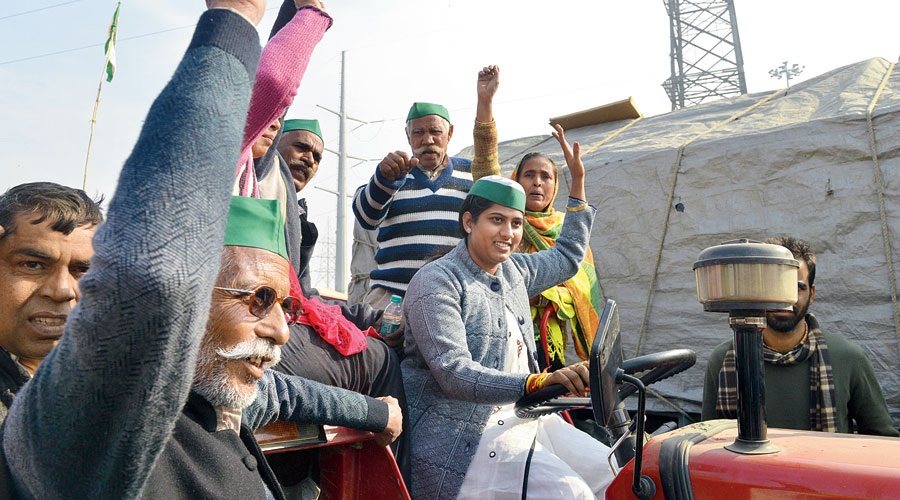 The protesting farmers on Monday described the Centre’s Sunday night offer for talks as a smokescreen meant to deflect attention from its unwillingness to consider their demand for repeal of the three farm laws they have been opposing from the ordinance stage in June.

Stating that the farmers have always been open to talks, the All India Kisan Sangharsh Coordination Committee (AIKSCC) said it was the government that had turned a deaf ear to their demands while keeping up the pretence of being accommodative.

The AIKSCC has not specified any day for resuming negotiations while sending a detailed response to the agriculture secretary’s letter inviting them to talks on a date of their choice.

The AIKSCC has decided to organise protests on Tuesday at the offices of the Ambanis and the Adanis at the Bandra Kurla Complex in Mumbai, where farmer union leaders from Punjab are expected to address farmers.

Reports from Punjab and Haryana spoke of farmers removing Jio towers from their land and gheraoing offices and outlets of the Ambanis and the Adanis, who they believe stand to benefit the most from the three new laws.

All India Kisan Sabha (AIKS) general secretary Hannan Mollah, in whose name the response has gone from the AIKSCC to the Centre, said: “There is no indication in the letter of any change of heart within the government; they are repeating the same thing over and over again. So, what’s the point in suggesting a date when they are not willing to talk to us on our agenda? Give us an assurance that they will take up our agenda — which is very limited — and we are always ready to talk.”

The AIKS is a member of the AIKSCC.

Referring to the repeated detailing by the government of the points it is willing to concede, the AIKSCC underlined that from June, several representations had been submitted to the government, first for withdrawal of the ordinances and then for repeal of the laws after they had been enacted.

The “Dilli Chalo” call was given when all such efforts failed. While the government has shown willingness to amend the laws on eight points, the farmers insist this is cherry-picking from the various infirmities in the laws they had pointed out as the reason for demanding repeal.

The farmers contend that tweaking the laws will not change their intent which, by the government’s own admission, is to encourage trade in food.

The AIKSCC letter contests all the claims made by agriculture minister Narendra Singh Tomar in his open letter to the farmers. The letter listed the benefits the farming community would reap from the three new laws.

The farmers contend that instead of being the silver bullet the government is making the new laws out to be, the three pieces of legislation would turn farmers into labourers and allow corporate groups to gradually take over their land.

Apart from the government’s refusal to even consider a repeal, the farmers’ letter makes it clear, their position has also been hardened by the treatment meted out to them -- first the water cannoning and road-digging by the BJP government in Haryana while they were approaching Delhi nearly a month ago, and then the sustained vilification of the agitation.

With the protests finding an echo in world capitals, all Indian missions are aggressively tweeting English translations of Tomar’s letter while the AIKSCC has urged the diaspora to step up the protests overseas.