Thousands of farmers march to Mumbai

Police have stepped up security at Azad Maidan, the rally’s venue, and personnel of the State Reserve Police Force (SRPF) have also been deployed 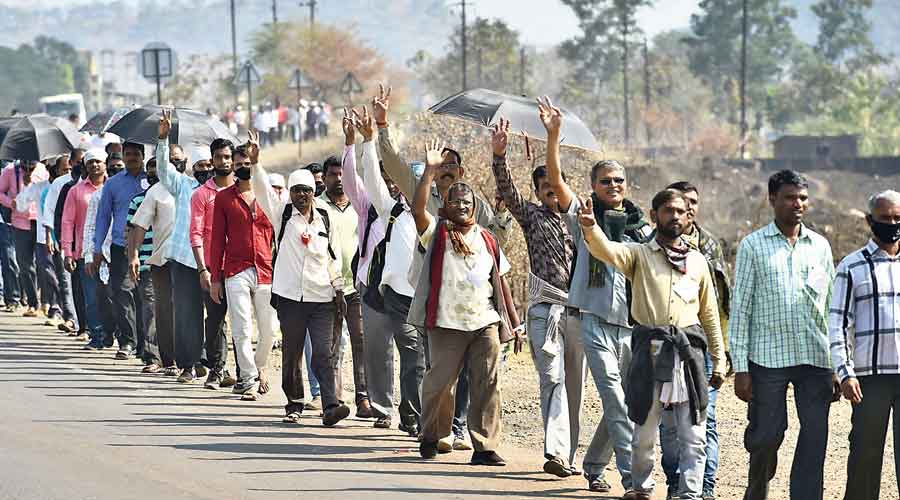 They came in an endless stream, down the hills and flooding the streets of India’s business capital, challenging the government’s theory that the farmers’ protest is limited to Punjab and Haryana.

Thousands of farmers from across Maharashtra reached Mumbai on Sunday evening to participate in a rally on Monday against the Centre’s three new farm laws.

Police have stepped up security at Azad Maidan, the rally’s venue in south Mumbai, and personnel of the State Reserve Police Force (SRPF) have also been deployed. Drones will be used to keep an eye on the event, a police officer said.

The All India Kisan Sabha’s (AIKS) Maharashtra unit said in a statement that around 15,000 farmers had set out for the state capital from Nashik on Saturday on foot and in tempos and other vehicles.

NCP chief Sharad Pawar and some other prominent leaders of the ruling coalition in Mahatrashtra will address the rally, the release said. The state Congress, which is an ally in the government, has extended its support to the protest.

Farmers from various places gathered in Nashik and started their journey towards Mumbai on Saturday. Many peasants also joined on the way, the AIKS said. Videos on social media showed a surge of people marching through hilly terrain, shouting slogans.

Many women farmers took part in the 7km march at Kasara Ghat, which started at 9am and ended around 11.30am

They halted overnight at Ghatandevi near the hill town of Igatpuri. On Sunday morning, the farmers marched down the Kasara Ghat to head for Mumbai, while many set off in vehicles.

Many women farmers took part in the 7km march at Kasara Ghat, which started at 9am and ended around 11.30am. Later, they continued their forward journey in vehicles.

On the way, hundreds of Citu-affiliated factory workers from Igatpuri and Shahapur tehsils welcomed the farmers by showering flowers. At the Kalyan-Bhiwandi crossroad, the farmers were welcomed and provided food packets.

They entered Mumbai through the Mulund checkpoint, the entry point to the state capital from neighbouring Thane, and were welcomed at Kannamwar Nagar in Vikhroli by hundreds of workers of the Left parties.

The farmers then proceeded towards the Azad Maidan, where a joint sit-in also involving the Samyukta Shetkari Kamgar Morcha began on Sunday morning and will continue till Republic Day.

“The rally is being held to support and expand the two-month-long farmers’ struggle in Delhi for a repeal of the three farm laws and for a central law to guarantee a remunerative minimum support price (MSP) and procurement all over the country,” the AIKS statement said.

The Samyukta Kisan Morcha, under whose banner farm unions are protesting across the country, has given a nationwide call for a struggle from January 23 to 26, including rallies to Raj Bhavans in states.

Over 100 organisations came together and formed the Samyukta Shetkari Kamgar Morcha, Maharashtra, at a meeting in Mumbai on January 12.

The Mumbai rally will begin at 11am on Monday, the AIKS release said.

Later, the protesters will march to Raj Bhavan and submit a memorandum to governor B.S. Koshyari.

The protesters have also decided to hoist the national flag at Azad Maidan on Republic Day and pledge to make the struggle of the peasants and workers successful.