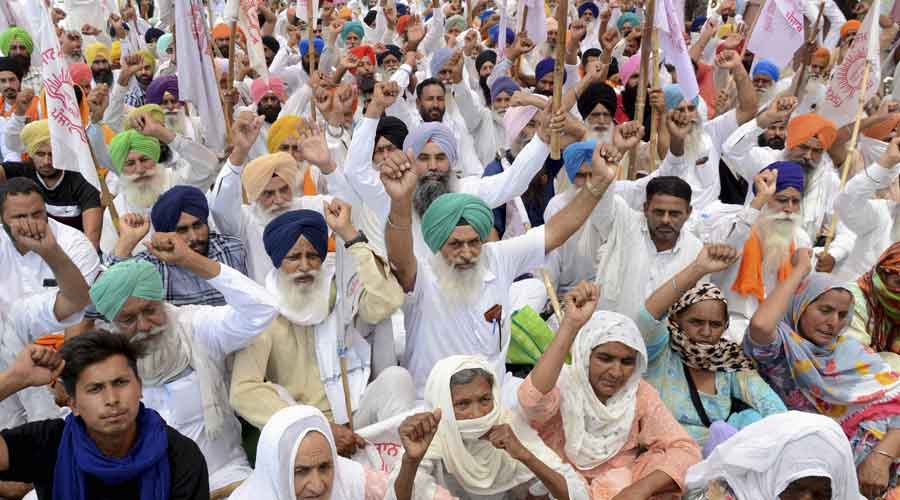 Farmers burnt copies of the Centre’s three new farm laws near the residences of BJP leaders and at other places in Punjab and Haryana on Saturday, observing the day of the promulgation of the farm ordinances last year as “Sampoorna Kranti Diwas” (Total Revolution Day).

Thousands of kilometres away in Tamil Nadu, too, farmers took part in similar agitations.

The protesting peasants in Punjab and Haryana, the epicentres of the farm movement, carried black flags and raised slogans against the BJP government at the Centre for not scrapping the legislations, which they said would “destroy” the farming community.

The Samyukta Kisan Morcha, the umbrella outfit spearheading the agitation, had given the call to observe Sampoorna Kranti Diwas.

In Phagwara in Punjab, farmers burnt copies of the farm laws near the residence of Union minister Som Parkash at Urban Estate. The protesters assembled near GT Road and marched towards the BJP politician’s home.

Police had put up barricades on the road leading to Parkash’s house to prevent protesters from reaching there, officials said. The Union minister of state for commerce and industry was not at home.

Farmers also held a protest near another of Parkash’s residences in Mohali district.

In Chandigarh, a protest was held against the Centre for not repealing the farm laws, the main demand of the agitating farmers besides a legal guarantee on minimum support price.

In Hoshiarpur, farmers took out a protest march from the local Gurdwara Singh Sabha to the BJP office at Shastri Market where they burnt copies of the three legislation.

In Karnal, Haryana chief minister Manohar Lal Khattar appealed to farmers not to disturb law and order during their protest.

In Ambala in Haryana, farmers held a demonstration near the residence of Haryana home minister Anil Vij.

A group of farmers affiliated to the Bharatiya Kisan Union gathered at National Highway 1 near Ambala Cantonment, around 500 yards from the residence of the home minister.

The entry point to Vij’s residence at Shastri Colony was barricaded and the police were deployed.

Protests were also held near the residence of BJP MLA from Ambala City, Aseem Goyal. Goyal was not at home when the farmers burnt copies of the laws.

In Panchkula, the police lathicharged farmers who tried to force their way through barricades to head towards the home of Haryana Assembly Speaker Gian Chand Gupta.

After being promulgated as ordinances on this day last year, the farm bills were passed by Parliament in September. The President gave his assent to the bills later that month.

Down south, members of the Tamil Nadu Vivasayigal Sangam, a farmers’ outfit, burnt copies of the three farm laws, demanding their withdrawal.

Protests were held in various parts of the state with farmers assembling in small groups wearing face masks and maintaining physical distance owing to the pandemic.

Recalling the year-long protests by farmers across the country and their sacrifices during the six-month picketing of New Delhi’s borders, Sangam state general secretary P. Shanmugam urged Tamil Nadu chief minister M.K. Stalin to take steps to pass a resolution against the farm laws in the Assembly.

“Our chief minister wrote to the Union government recently, seeking the withdrawal of the three farm laws for the welfare of the farming community,” Shanmugam said.

At Tambaram near Chennai, 15 people led by Shanmugam gathered to burn copies of the laws. They raised slogans denouncing the Centre for enacting the “anti-farmer laws”.

Policemen doused the flames with a bucket full of water.

Shanmugam said the protests were peaceful.

“In districts such as Tiruvarur, Thanjavur and Nagapattinam, the CPI and the CPM extended support to us,” he said.

Scores of farmers have been camping at Delhi’s borders since November last year demanding that the Farmers’ Produce Trade and Commerce (Promotion and Facilitation) Act, 2020; Farmers’ (Empowerment and Protection) Agreement on Price Assurance and Farm Services Act, 2020; and the Essential Commodities (Amendment) Act, 2020, be rolled back and a new law made to guarantee minimum support prices for all crops.

The government, however, has been maintaining that the laws are pro-farmer. Eleven rounds of talks between the agitating farmers and the government have failed to break the deadlock. The last round of talks was held on January 22.