Farmers gear up for protest against fuel price hike 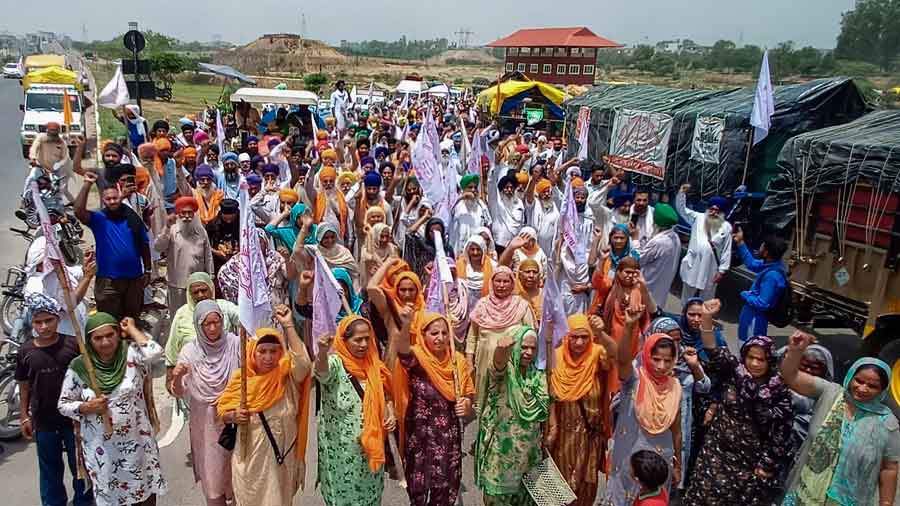 Farmers shout slogans on their way to Delhi to join other farmers who are continuing the protest against the central governments recent agriculture reform bill, at Beas in Amritsar, Monday, July 5, 2021.
PTI
Our Bureau, Agencies   |   New Delhi   |   Published 07.07.21, 10:04 PM

Large contingents of farmers have started arriving at protest sites in preparation for their agitation Thursday against fuel price hike, the Samyukt Kisan Morcha (SKM) said on Wednesday.

"At the call of Samyukt Kisan Morcha, protests will be organised across India tomorrow (July 8) from 10 am to 12 noon for two hours against the hike in diesel, petrol and cooking gas prices," the umbrella body of over 40 farm unions said.

The protestors will reach designated public locations with any means of transport including scooters, motorcycles, tractors, cars, buses, trucks and also with empty gas cylinders, it said.

On Wednesday, the petrol prices in Delhi as well as Kolkata crossed the Rs 100 a litre mark.

The SKM has demanded that the fuel prices be halved with immediate effect.

It has also appealed to the protestors to keep the demonstration peaceful and on the roadside, without blocking any pathways.

This is an issue that affects every section of the society, and SKM appeals that farmers, labourers, youth, students, women, employees, shopkeepers, transporters, traders and others be part of these protests everywhere, the body said.

The SKM has also planned fresh rounds of protests during the monsoon session of the parliament scheduled later this month, when 200 protestors will agitate everyday outside the Parliament building reiterating their demands of repealing the three farm laws and a legal guarantee for Minimum Support price (MSP).

Over the last seven months, thousands of farmers from different parts of the country have been protesting at Delhi borders against the new farm laws which, they claim, will do away with the MSP system and leave them at the mercy of big corporations.

The government, however, has been protecting the laws as major agricultural reforms.