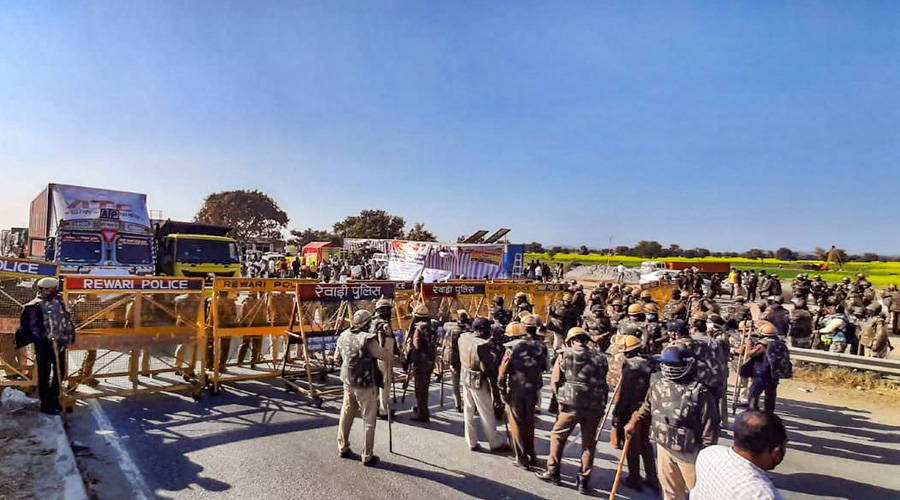 Farmers protesting against the Centre's new agri laws blocked the Jaipur-Delhi national highway in Shahjahanpur of Rajasthan's Alwar district on Sunday as police stopped them along the state's border with Haryana while they were marching towards Delhi.

“We are squatting on the highway in support of farmers. We are ready to vacate the road if we are allowed to march towards Delhi,” Yadav told reporters while apologising to the people for the inconvenience caused to them.

Kisan Panchayat president Rampal Chaudhary is also continuing with his protest along with the farmers on the Haryana-Rajasthan border highway as police did not allow them to move forward.

“Farmers affiliated to different farmer organisations are reaching Shahjahapur border. We want the government to repeal the new farm laws and for this, we want to march towards Delhi,” said Chaudhary.

“We do not have any intention to block the Jaipur-Delhi highway. Police have stopped us from marching towards Delhi, which has led to jam. We want the Centre to withdraw the anti-farmer laws,” Amra Ram said.

Due to blockade, vehicular traffic on the Jaipur-Delhi national highway had to be diverted through Bansur and other routes of Alwar, police said.

One-way traffic from Delhi to Jaipur was later opened for traffic but Jaipur-Delhi highway is blocked due to the agitation, they said.

Police administration is keeping a vigil on the border areas in view of the agitation.

"The police department is all prepared to maintain the law and order and have made all arrangements in view of the farmers' agitation," Bhiwadi SP Ram Murti Joshi said.

Enacted in September, the three farm laws have been projected by the government as major reforms in the agriculture sector that will remove the middlemen and allow farmers to sell their produce anywhere in the country.

However, the protesting farmers have expressed apprehension that the legislation would pave the way for eliminating the safety cushion of Minimum Support Price and do away with the mandi system, leaving them at the mercy of big corporates.