The Centre's agenda is clear and it wants to pave the way for corporate houses to enter the farm sector, farmer leader Kamal Preet Singh Pannu said 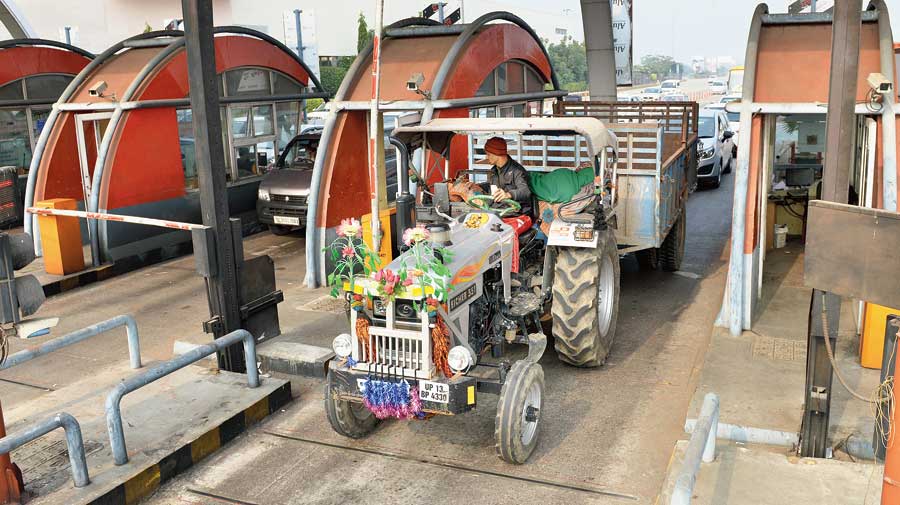 The Delhi Police on Sunday beefed up security at the national capital’s border with Haryana as farmers announced they will block the Jaipur National Highway-8, which passes through Gurgaon. It has also taken measures so that commuters do not face inconvenience. Thousands of farmers will start their ''Delhi Chalo'' march with their tractors from Rajasthan's Shahjahanpur through the Jaipur highway at 11 am on Sunday, farmer leaders had said on Saturday.
Prem Singh
R. Suryamurthy, Anita Joshua   |   New Delhi   |   Published 13.12.20, 02:22 AM

Prime Minister Narendra Modi on Saturday rooted for more private investments in farming, only to confirm the protesting farmers’ worst fears and expose the deep fault lines caused by the government’s unseemly rush to push through the controversial laws.

The mistrust with which the call was greeted also showed how, unwittingly or otherwise, the Modi government had transformed “private investments” — considered essential for building support systems such as cold chains and logistics systems — and “corporatisation” into dirty expressions.

“In the fields of supply chain, cold storage and areas like fertilisers, etc, both interest and investments of the private sector are needed. There is a huge scope in rural agro-based industries and a friendly policy regime is in place for that,” Modi told the annual meeting of industry chamber Ficci on Saturday.

“We have seen walls between the agriculture sector and other areas associated with it — be it agriculture infrastructure, food processing, storage or cold chain. All walls and obstacles are being removed now. After reforms, farmers will get new markets, options and more benefits of technology. The country’s cold storage infrastructure will be modern. By doing this, there will be more investments in agriculture that will benefit farmers,” the Prime Minister added.

The words are certain to be music to the ears of some pro-reform commentators but the farmers who till the land and are now being forced to spend their nights on highways heard otherwise.

The farmer unions, tired of being made to run around in circles in the name of talks and enraged by a vilification campaign by the government ecosystem, read in the Prime Minister’s statement a vindication of their stand that the farm laws were tailored primarily to aid crony capitalists.

The government’s agenda is clear and it wants to pave the way for corporate houses to enter the farm sector, farmer leader Kamal Preet Singh Pannu told reporters at the Singhu border near Delhi after the Prime Minister’s Ficci speech.

The depth of the trust deficit was on display on a day farmers spread the reach of the Punjab strategy of freeing up toll plazas for a day across the country. The All India Kisan Sangharsh Coordination Committee (AIKSCC) said 165 of the 450 toll plazas in the country were picketed through the day and people were allowed to cross them free of charge.

The Prime Minister may have sought to showcase his “pro-reform” face but his colleagues are deploying the other half of the classic “good-cop-bad-cop” tactic.

In spite of taking part in talks with the farmers, food minister Piyush Goyal has been suggesting the farmers’ agitation has been hijacked by “ultra-Left” elements.

The farmers are reading the statements of Modi and Goyal together, smelling in them a ploy to let crony capitalists seize control of the food chain.

Slamming the government for its continuous efforts to defame the movement, the working group of the AIKSCC said the government was resorting to such tactics because it did not want to address the issue at hand.

“First, the central government claimed that the entire movement of farmers is sponsored by political parties. Then it said it was being sponsored by foreign forces. Then it said it was a Punjab-specific movement that involved pro-Khalistani forces. Then they said farmer unions had walked away from the talks, even though the unions participated in each round of the talks....”

At the Singhu border, farmer leader Pannu said: “The government wants to drag this on in the hope of weakening our struggle. But people are coming regularly from the villages even though the police are putting up barricades to stop them. We will defeat all efforts by the government to break this struggle.”