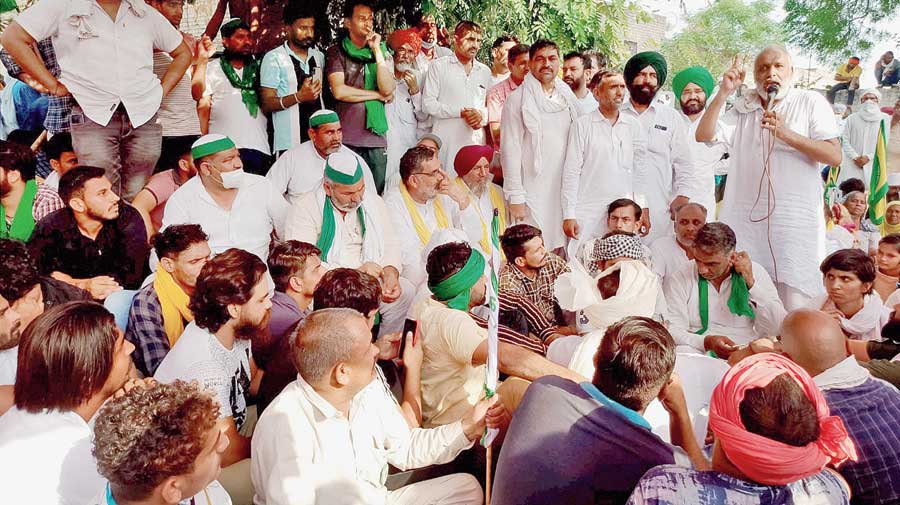 Tohana police station in Haryana has emerged as a new rallying point in the farmers’ movement against the three laws forced on them by the Narendra Modi government last year, with tents being pitched at the site as part of a “jail bharo” campaign after three protesters were arrested and a ruling alliance MLA hurled abuses at them.

The siege began on Saturday and had not been lifted till late on Sunday evening. The farmers were insistent that the police drop the charges against the three farmer leaders, one of whom was arrested on a complaint filed by Devinder Babli, an MLA of the JJP, a partner in the BJP-led government in the state.

Babli expressed regret on Saturday night for using inappropriate language and agreed to withdraw the cases, but the Fatehabad district administration refused to follow suit.

As the standoff spilled over into Sunday, it added fuel to fire and protest sites on Delhi’s borders — where thousands of farmers have been on a sit-in since November 26 — saw a fresh inflow of protesters from Punjab even though the tents at Singhu, Tikri and Ghazipur have been damaged in the thunderstorm that lashed the national capital last week.

While Tohana police station is not the only place in Haryana where farmers have been booked for boycotting or gheraoing ministers and BJP and JJP MLAs, it became a flashpoint after Babli abused some farmers during one such protest last week.

Rakesh Tikait, who leads a faction of the Bharatiya Kisan Union that is part of the Samyukta Kisan Morcha, reached the area and picketed the toll plaza on Thursday.

On Saturday, in line with a protest programme announced on Friday by the Morcha, Tikait and Gurnam Singh Chaduni of BKU-Haryana led farmers into the Tohana mandi from where they went to the police station.

As the farmers marched to the police station, they were constantly reminded by their leaders to remain peaceful and not direct any anger at the police. The Morcha leadership, which has been spearheading the campaign against the three laws, is aware that the non-violent nature of the farmers’ struggle has been its strength and also that security personnel are essentially farmers in uniform.

The farmers know that the Modi government would use any violence to turn the narrative against the movement with the help of what they call “godi (pliant) media”.

Veteran farmer leader Darshan Pal of the Krantikari Kisan Union said Haryana police had arrested one of the union leaders, Makkhan Singh, on Thursday night on a complaint from Babli. Before that, Tohana police had arrested 27 farmer leaders while they were going to protest outside Babli’s house, and later sent two of them, Ravi Azad and Vikas Sisar, to Hisar jail in the dead of night.

“We decided to court arrest in protest against such strong-arm tactics. The administration agreed to talk to the farmers on Saturday evening and it was decided that two of the farmer union leaders would be given bail and brought to them,” Darshan Pal said.

“Babli too agreed to withdraw the case against Makkhan Singh. We had three rounds of talks but the administration refused to give an assurance that the cases against the three would be withdrawn. Our leaders sitting in Tohana have now given a call to farmers from other districts to come to Tohana, and also picket police stations across the state on Monday.”