Centre to Supreme Court: No assurance on farm laws 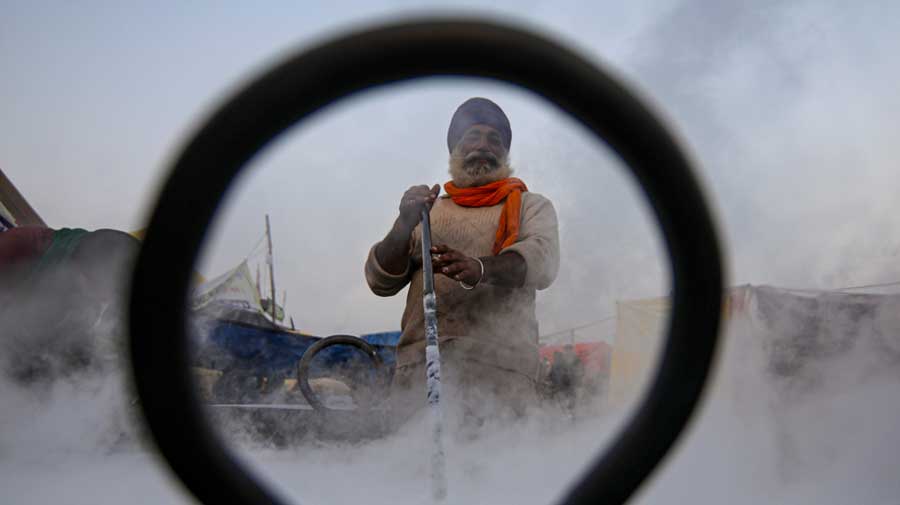 The Centre on Thursday refused to assure the Supreme Court that it would not implement the three new farm laws till the bench had heard all the parties, setting up an exchange on who was being adamant.

Any such assurance would encourage the “adamant” farmers to avoid talking to the government, attorney-general K.K. Venugopal said.

Chief Justice of India S.A. Bobde retorted: “They (farmers) may say you (the government) are adamant.” 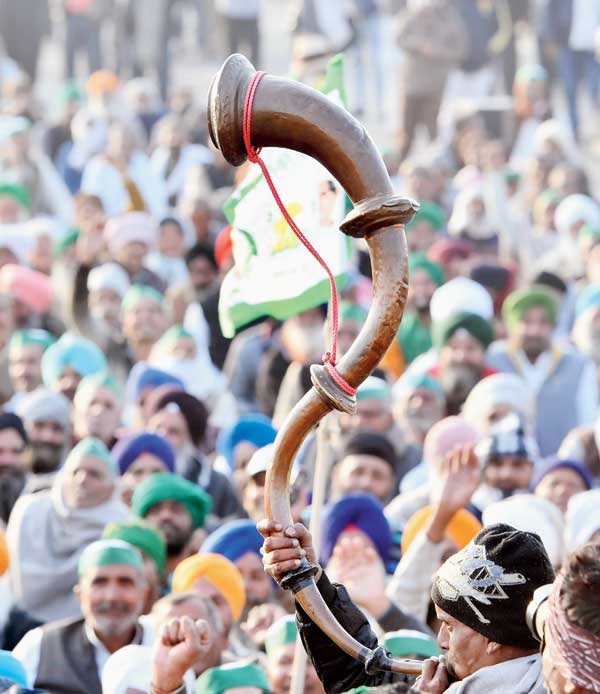 A farmer plays a bugle during the protest at the Ghazipur border on Thursday.
Prem Singh

The bench, which included Justices A.S. Bopanna and V. Ramasubramanian, made it clear it would not “interfere with the protest” and that “at this stage the farmers’ protest should be allowed to continue without impediment”.

It, however, stressed that while the entire country sympathised with the farmers, the protests should be non-violent and not cause any inconvenience to the public.

When senior advocate Harish Salve, representing Delhi resident Janeshwar who wants the farmers evicted, kept harping on the city’s roads being blocked, Justice Bobde asked him sharply whether the protesters had blocked, or threatened to block, “the entire city”.

The court said that although it would go into recess from the weekend and reopen only on January 4, the parties would be free to approach any vacation bench in between.

In particular, it said, the various farmers’ unions could present their views on the composition of the committee the court wants to appoint to resolve the issue.

The court clarified that it would not at the moment decide the validity of the new farm laws but focus on resolving the dispute through the proposed committee.

The court is considering two petitions demanding eviction of the farmers from Delhi’s borders on the ground of their blockade causing hardship to residents, and a third seeking repeal of the farm laws.

“Mr Attorney-general, will you assure the court that you will not implement the law, till we hear all…. We are not staying the law but you can just say that no action will be taken,” Justice Bobde said.

“No, that is not possible because then the farmers will not come for discussion,” Venugopal said.

The Chief Justice said: “It (the assurance) is to enable the discussion.... We don’t think they (farmers) will accept your (government’s) conclusions. Let the committee decide. We have observed that you have not been successful in negotiations.”

Last week, the apex court had rapped the Centre for continuing construction and tree relocations for the Central Vista project despite the matter being under its scrutiny, saying: “Some deference should be shown to the court.”

A give and take on the issue of the right to protest versus citizens’ right to life took place between the bench and Salve, who was appearing also for the states of Uttar Pradesh and Haryana, whose borders with Delhi have been besieged by the farmers.

Salve insisted that the blockade was affecting “our right to life” and had raised the prices of fruits and vegetables, and that the farmers’ arrival in “droves” had increased the risk of Covid-19 infection.

“We are making it clear, we recognise the fundamental right to protest against law, but it shouldn’t result in damage to anyone else’s life,” the Chief Justice said.

Salve conjured up gory possibilities, saying the agitators must in writing own responsibility for anything untoward, such as the burning of a taxpayer’s car or destruction of public or private property.

But Justice Bobde recalled that a fine Bombay High Court had imposed on the Shiv Sena after an unruly protest had not yet been recovered.

“We cannot make them give deposits with the government before the protest,” he said.

As Salve held forth on Delhi’s roads being blocked, the CJI asked: “Is the entire city, and entry routes blocked? Don’t gloss over this point, have they said they’ll block all roads to Delhi?”
Solicitor-general Tushar Mehta and Venugopal intervened to say the farmers had blocked all the entry points to Delhi.

Advocate Rahul Mehra, appearing for Delhi’s Aam Aadmi Party government, denied any blockade in the capital. He alleged the Centre was making “mischievous submissions” without affidavits.

The Centre had made BJP-ruled Uttar Pradesh and Haryana respondents in the case but not the Delhi or Punjab governments.

The court order later underlined that according to the farmers, “the roads are blocked by the police in order to prevent the entries of the protesters/farmers to the city of Delhi”.

Justice Bobde said the court wanted the committee to include independent experts like journalist P. Sainath, who has written on rural matters, poverty and inequality, apart from farmer leaders and government representatives.

Appearing for Congress-ruled Punjab, former Union minister and senior advocate P. Chidambaram said the state had “no objection to a committee of eminent people having a dialogue between farmers and the Centre”.

The court’s written order said: “We clarify that this court will not interfere with the protest in question. Indeed the right to protest is part of a fundamental right and can as a matter of fact, be exercised subject to public order. There can certainly be no impediment in the exercise of such rights as long as it is non-violent and does not result in damage to the life and properties of other citizens and is in accordance with law.

“We are of the view at this stage that the farmers’ protest should be allowed to continue without impediment and without any breach of peace either by the protesters or the police.

“The writ petitions challenging the said laws have been filed before this court and will be decided in due course. In order to bring about an effective solution to the present stalemate between the protesters and the Government of India, we consider it appropriate in the interests of justice to constitute a committee comprising of independent and impartial persons including experts in the field of agriculture for the purpose. This may not be possible without hearing all the necessary parties.

“The pendency of these matters will not prevent the parties from resolving the issue amicably.”