Advertisement
Home / India / How to add hot tea to injury

How to add hot tea to injury 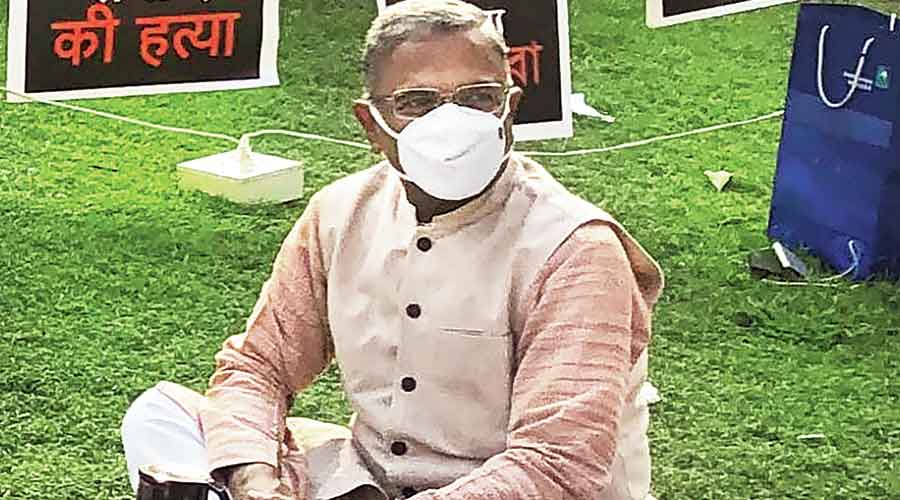 After using actor Sushant Singh Rajput’s death to divert attention from Bihar’s floods and the pandemic situation, the BJP has latched onto Rajya Sabha deputy chairman Harivansh to steer it through the gathering storm over the contentious farm bills ahead of Assembly elections in the state and to shield itself from the charge of bulldozing Parliament.

Harivansh’s morning visit to Parliament House to offer tea and snacks to the eight MPs suspended from the Rajya Sabha for Sunday’s ruckus over the farm bills that he had declared passed by a contested voice vote, and his letter to the President saying he was so anguished by the MPs’ attacks on him that he had been unable to sleep were used by none other than Prime Minister Narendra Modi to hail the deputy chairman.

The Prime Minister tweeted: “To personally serve tea to those who attacked and insulted him a few days ago as well as those sitting on dharna shows that Shri Harivansh Ji has been blessed with a humble mind and a big heart. It shows his greatness. I join the people of India in congratulating Harivansh Ji.”

This was followed up later with another tweet in which he shared Harivansh’s letter to the President. In the letter, dated Tuesday, the deputy chairman dwelt on his Bihar background and announced his decision to observe a day’s fast. 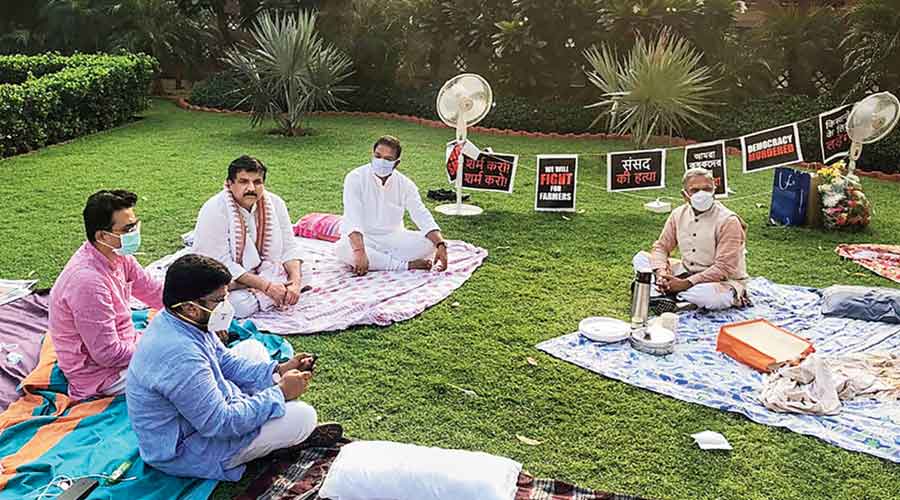 Deputy Chairman of the Rajya Sabha Harivansh Narayan Singh offers tea to suspended MPs on the premises of Parliament on Tuesday. The MPs protest over their suspension from the remaining monsoon session over the ruckus created in the Rajya Sabha
PTI

Around the same time that Modi tweeted the letter, it was referred to in the Rajya Sabha by leader of the House Thawar Chand Gehlot. Soon enough, several ministers and multiple BJP handles were sharing the letter on social media, leaving no one in doubt about the strategy that was being unfolded for that force multiplier — news television — to carry forward.

“For centuries the great land of Bihar has been teaching us the values of democracy. In line with that wonderful ethos, MP from Bihar and the Rajya Sabha Deputy Chairperson Harivansh Ji’s inspiring and statesman like conduct this morning will make every democracy lover proud,” Modi tweeted.

The Opposition is up in arms over the manner in which the two farm bills were steamrollered through the Rahya Sabha on Sunday, with Harivansh who was in the Chair not accepting its demands for a division (paper or electronic vote). Leader of the Opposition Ghulam Nabi Azad said in the Rajya Sabha on Tuesday the way the bills were rushed through the House was the last straw.

Arguing that the Opposition has a duty towards the people, Azad announced a boycott of the rest of the session by the Congress unless the government ensures through legislation that private buyers of agriculture produce will pay the MSP (minimum support price) and the suspension of the eight MPs is revoked. Subsequently, other Opposition parties also followed suit.

The MPs, who were at the forefront of the protests against the farm bills in the House on Sunday, were suspended on Monday and spent the night on dharna on the Parliament Complex lawns.

By the time the rest of the Opposition along with the Telangana Rashtra Samithi — which usually votes with the government — boycotted the Rajya Sabha, the eight MPs had decided to call off their dharna at Parliament House, having completed the 24-hour cycle that saw several party leaders join them in solidarity.

The BJP accused the Opposition of “humiliating” Harivansh and sought to portray this as an “insult” to Bihar, describing him as a “son” of the state. Nominated to the Rajya Sabha from Bihar, Harivansh is from Ballia district in Uttar Pradesh. He was chief editor of Prabhat Khabar, a newspaper based in Ranchi.

“Why should we react? That’s what they want,” said an Opposition leader even as Trinamul’s Derek O’ Brien said the fight was against the “Fascist methodology to demolish Indian democracy” by the two people in charge — “M&S” — as he calls the Modi-Shah duopoly. Azad stressed the Opposition had nothing personal against Harivansh.

But the Opposition also made it clear it was not taken in by his tea and snacks trip. “If the deputy chairman was sincere in his intent, why did he come to offer us tea in the morning with three cameras in tow?” asked the CPM’s Elamaram Kareem.

“When he came to our protest site near the Gandhi statue on the Parliament House lawns, he told us that he was coming in an unofficial capacity and had, therefore, not used his official vehicle. We asked, ‘If so why are there three camerapersons with you?’” Kareem told The Telegraph.

Another leader who did not want to be quoted said the alacrity with which the Prime Minister amplified the tea offer and the letter showed how desperate the BJP was to divert attention from the farm bills that have triggered widespread apprehension among farmers across the country.

“Farmers are out on the streets; it is not about individuals,” RJD’s Manoj Jha told this newspaper; steering clear from the BJP’s efforts to deify Harivansh. Earlier, in the Rajya Sabha, chairman Venkaiah Naidu said Harivansh had adopted Mahatma Gandhi’s and J.P. Nayaran’s way by deciding to observe a day’s fast in the hope that it will inspire introspection among those MPs who “misbehaved” with him.

Harivansh was not alone in announcing a fast. Veteran politician and former agriculture minister Sharad Pawar also announced a day’s fast in solidarity with the suspended MPs in their fight for farmers and democracy.

Opposition away, 7 bills rushed through Rajya Sabha in 3 hours