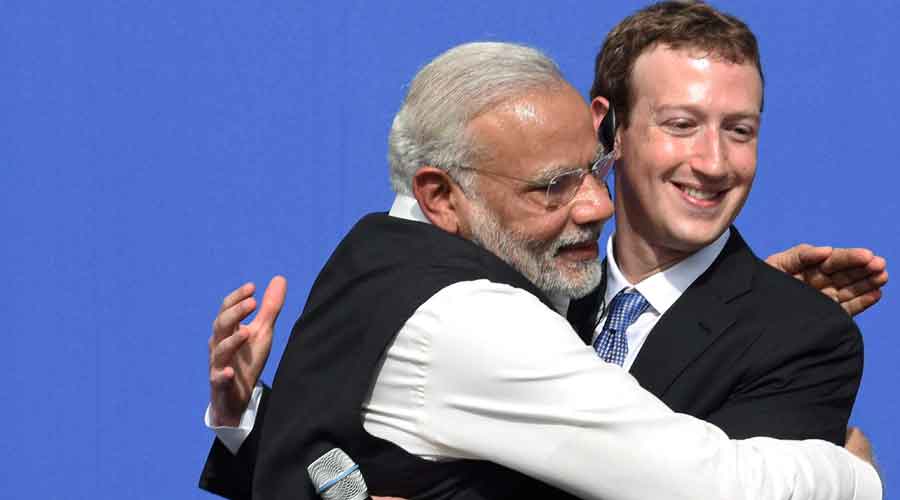 One member said the BJP MPs seemed to have taken their cue from the letter written by IT minister Ravi Shankar Prasad to Facebook founder Mark Zuckerberg on Tuesday
PTI
Anita Joshua   |   New Delhi   |   Published 03.09.20, 02:10 AM

Facebook’s India head Ajit Mohan appeared before the parliamentary standing committee for information technology on Wednesday in the midst of a raging debate over the social networking platform’s perceived bias towards the BJP that the ruling party has sought to fight back with a counter allegation.

Mohan was questioned by the panel for well over two hours after which he is said to have responded with an assurance of providing a written reply to all the queries.

According to those present in the meeting, even the BJP members joined the Opposition MPs in questioning the Facebook head though party MP Nishikant Dubey had been against panel chairman Shashi Tharoor’s decision to summon the platform after The Wall Street Journal expose on the network giving preferential treatment to the BJP while applying its hate speech rules.

One member said the BJP MPs seemed to have taken their cue from the letter written by IT minister Ravi Shankar Prasad to Facebook founder Mark Zuckerberg on Tuesday; quizzing Mohan about what they billed as the platform’s bias against the ruling party.

A majority of the 30-member panel raised questions; mostly on hate speech and how Facebook addressed the issue of the platform being used to spread hate against certain communities; making some keen watchers bill it another pandemic of sorts.

Since the panel members are not supposed to speak about the proceedings till the report is finalised, Tharoor tweeted: “In response to overwhelming media interest in the meeting of the Parliamentary Standing Committee on Information Technology that just adjourned, this is all I can say: we met for some three & a half hours & unanimously agreed to resume the discussion later, incl (including) w/reps (with representatives) of @Facebook.’’

Late in the night, a Facebook company spokesperson said: “We thank the honourable parliamentary committee for their time. We remain committed to be an open and transparent platform, and to giving people voice and allowing them to express themselves freely.’’

However, there was no response from Facebook to the charges made against it by Prasad in his letter. The Telegraph sent a questionnaire to Mohan seeking a response to the allegations made by the minister about Facebook India being dominated by “people who belong to a particular political belief’’ but got no reply.

Prior to Prasad’s letter, Trinamul Congress leader in the Rajya Sabha, Derek O’Brien, had written to Zuckerberg stating that the “company’s recent blocking of Facebook pages and accounts in Bengal also points to a link between Facebook and the BJP’’. He also flagged the fact that he had sought an investigation into the serious charges against Facebook’s senior management in India in 2015 during a meeting with Zuckerberg in New Delhi.

In a separate letter to Tharoor, panel member P.R. Natarajan of the CPM drew attention to the fact that India is not the only place where Facebook has been accused of discriminatory practises. Demanding a criminal investigation into the relationship between BJP and Facebook, he said, pending this, the platform should not be allowed to operate with any government department or constitutional body.