‘Every step in Hathras aimed at destroying evidence’ 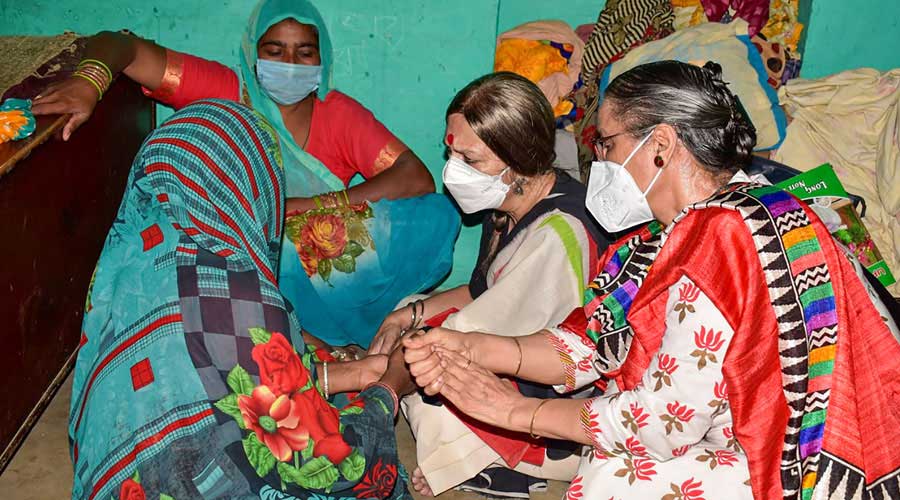 Protected by the authorities, the powerful have in recent years come to believe they can get away with all kinds of atrocities on the powerless, Malini Bhattacharya, activist, former professor of English at Jadavpur University, former chairperson of the West Bengal Commission for Women and former member of the National Commission for Women, tells Subhoranjan Dasgupta in the context of the Hathras outrage.

Q: The Hathras victim said without ambiguity that she had been raped. Why is the state authority so hell bent on proving that she had not been raped?

Bhattacharya: Your question presupposes the answer. Initially the victim, also the principal witness, was not in a fit state even to utter a word. On September 14, as far as we know, she stated on video that "jabardasti", a word commonly used for rape, had been perpetrated on her. On September 22, she was able to make a statement to the Aligarh magistrate and there she deposed that she had been raped. She also mentioned the names of four persons who had attacked her.

Legally, this was her dying statement and was to be given full importance as such in the investigation. The fact that even after that a UP police official said publicly that no evidence of rape could be found shows that it was their predisposition which made them give more credence to a botched forensic report than to the girl’s own dying statement.

Q: The entire administration, which includes the police, is repeating ad nauseam that the family will receive Rs 25 lakh as compensation. The district magistrate had the temerity to say that this lucrative compensation should silence queries and doubts.

Bhattacharya: The district magistrate of Hathras and the high-ups in the UP police have much to answer for. Even if half the objectionable statements the DM is seen making on video are true, legal proceedings must be taken against him. It is, however, unfortunate that many people seem to think that the compensation legally due to the victim/her family is the price paid to them to ensure their silence. Compensation, which relates to the damage done to the aggrieved (for instance, the disruption of their lives and livelihood), cannot affect the course of justice and due punishment of the culprits.

Q: Isn’t the state apparatus aware that any forensic examination conducted one week after the outrage would carry no evidence of rape?

Bhattacharya: The delay in sending the materials for forensic examination is deliberate and of a piece with the delay in taking the FIR, the neglect in ensuring proper medical attention to and treatment of the victim, the delay in preparing the medical-legal certificate and, worst of all, the cremation of the body in the dead of night by police personnel without the permission of the family and in defiance of all legal and humanitarian norms. Each and every step seems to have been taken with the precise intention of destroying evidence and subverting the course of justice.

Now that the case has been handed over to the CBI, there still seems to be cause for concern because their website is at present showing that their investigation will proceed on the basis of the Hathras FIR, which has no mention of gang rape and murder. The people apparently being sought to be protected by the administration must be very powerful people indeed!

Q: What is most dreadful is that the act of rape was followed by the battering of the rape victim to death. Why this malignant violence, this merciless act of killing?

Bhattacharya: The horrific nature of the violence is no longer unique these days. I can immediately think of half-a-dozen recent cases in UP and elsewhere which are unparalleled in sheer brutality and vindictiveness. It proves what many activists have been saying over the years, that rape has less to do with the sexual urge and more to do with power that seeks absolute subjugation.

In the last few years, cases of caste-based and communal violence and violence against the economically deprived have increased greatly, even as the powerful have felt that it is their privilege to gang up and inflict all kinds of torture on the powerless and get away with it. It has become much more difficult in recent years to bring such people to justice because the tentacles of their political influence have gone deep down into the police and administrative system, and even sometimes the judiciary.

That more rapes are being followed by murder could have another factor behind it: activists had warned the then government of it when it was decided to introduce an additional provision in the IPC prescribing capital punishment for rape and murder. Far from being a deterrent, this measure might instigate the culprit to silence the victim, who is also the main witness. It is not by making the penalties harsher but by demonstrating that unbiased and timely implementation of laws is possible even when the victim is poor and helpless that more culprits can be brought to book and violence may be checked.

But in the last few years, whatever administrative and judicial infrastructures had been set up for that purpose have been reduced to a shambles in the interests of the powerful. I think this answers your other question too regarding the situation in Bangladesh.

I am sure that among my sisters in Bangladesh there are many seasoned activists who would agree with me and instead of finding a panacea for rape in capital punishment would focus more on seeking improvement of the justice delivery system in their country to combat sexual violence.

Q: Would you endorse Rahul Gandhi’s contention that Dalits, tribal people and Muslims are not considered human beings by many Indians (read upper caste Hindus)?

Bhattacharya: I have already partially answered the question. Caste has always been an important dimension in sexual violence. In Hathras, the administration and the police are of course working for the powerful and rich Thakur community while the girl comes from a poor Valmiki family.

Besides, the Modi-Shah regime seems to have encouraged "upper caste groups" to gang up unconstitutionally as in so-called "honour crimes" to protect culprits from the same caste. Still, caste is but one of the aspects of illicit power we have to consider. The real question all of us, including Rahul Gandhi, should be trying to answer is: How can we stop the powerful from their arrogant destruction of democracy, which endangers not just the lives but the rights of women, of Dalits, of religious minorities and the poor?

Just so: Crimes against dalits