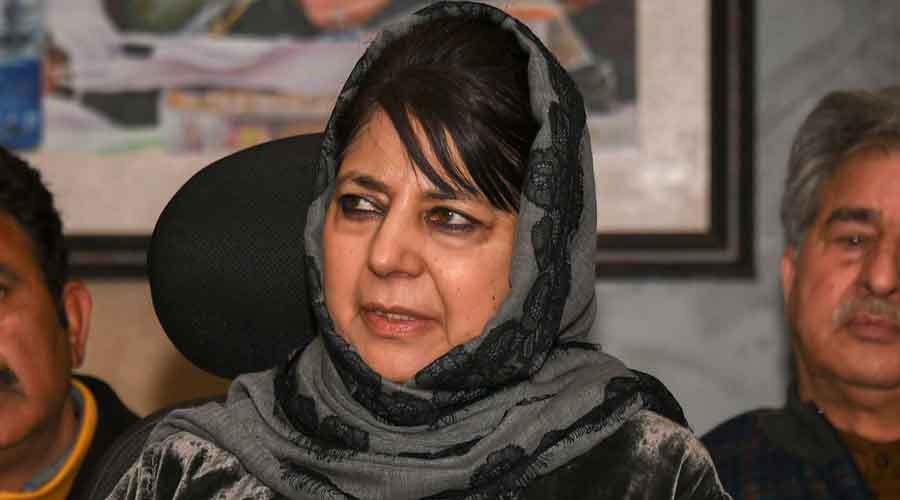 Former Jammu and Kashmir chief minister Mehbooba Mufti on Thursday vowed defiance after being grilled for hours by the Enforcement Directorate in an alleged money-laundering case, reports our special correspondent in Srinagar.

It was Mehbooba’s first interrogation by any investigating agency in the country after her release from detention in October.

“No rocket science is needed (to understand why I was questioned). Dissent has been criminalised in the country. This country is being ruled by the ED, CBI or NIA. Either you are booked for sedition or for money-laundering. Anybody who speaks, they are using ED or NIA,” Mehbooba, president of the Peoples Democratic Party, told reporters after she walked out of the ED office here.

The former chief minister vowed to continue to fight for the resolution of Kashmir issue and restoration of Article 370.

On Thursday, Mehbooba reached the ED’s Rajbagh office at 11am and came out late in the afternoon.

Mehbooba said she was questioned over two issues — one pertaining to the sale of her ancestral home in her hometown Bijebehara and the other related to how she spent the secret funds while she was the chief minister.

Mehbooba said the land was owned by her father Mufti Mohammad Sayeed. She said the ED asked her how she sold it and how much money she got.

“Second, (they asked) where I spent the secret funds as the chief minister, about the money given to the widows and the procurement of the list of beneficiaries,” she said.

“I have nothing to hide. My hands are clean. That is why it took them two years to find (a case to book her). Now they are raising questions on my father’s land and how much money was spent on his graveyard.”

Initially, the ED had asked the PDP president to appear before the agency in Delhi on Monday but she had refused citing prior commitments that could not be cancelled. Her request to ED officials that she be questioned in Srinagar was accepted after that.

On March 19, Delhi High Court had refused to stay the summons issued to her by the ED.

In a letter to the ED, Mehbooba had referred to the summons issued to her to present herself on March 22 at Delhi.

“I have challenged in the Delhi High Court the constitutional vires of Section 50 of the PMLA (Prevention of Money-Laundering Act), under which these summons are issued,” she had written.

Section 50 of the PMLA empowers the ED to summon any person to give evidence or produce records. People who are summoned are bound to answer questions put to them, failing which they can be penalised.

The PDP president, who has emerged as the most vocal critic of the scrapping of J&K’s special status, was released in October after 14 months of detention. Mehbooba, Farooq and Omar Abdullah were among thousands who were arrested for opposing the move.

Before Mehbooba, the ED had questioned Farooq in connection with a case related to the alleged embezzlement of the Jammu and Kashmir Cricket Association funds.