'Tourists will also be able to see Kailash Cave, from top and a route for the same will be constructed on upper hill' 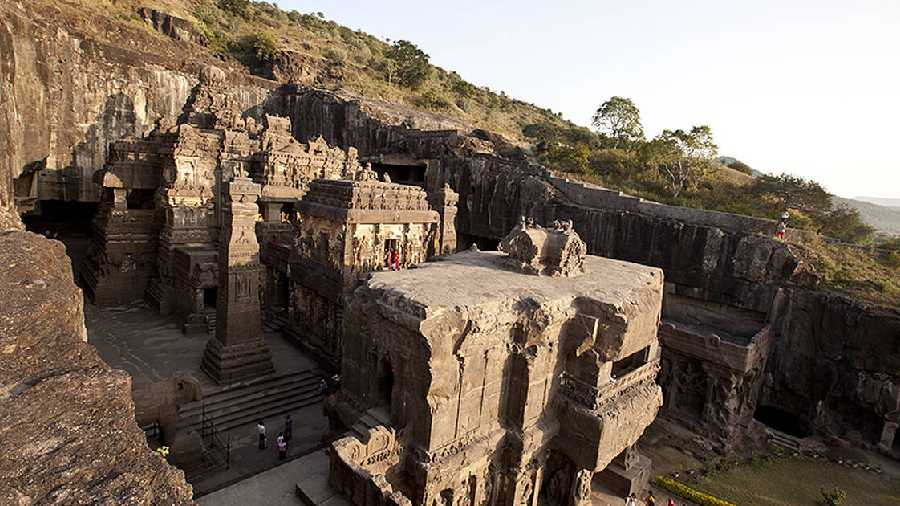 Ellora Caves, the UNESCO world heritage site in Maharashtra's Aurangabad district, will become the first monument in the country to have a hydraulic lift, a senior official of the Archaeological Survey of India (ASI) said on Sunday.

Situated around 30 km from Aurangabad city, Ellora is the one of the largest rock-cut temple complexes in the world, housing Hindu, Buddhist and Jain sculptures, and witnesses the highest tourist footfall in the region.

"The ASI has been undertaking several projects to make Ellora Caves, which is spread across a stretch of 500 metres, more tourist-friendly. These projects are either in the process of being sanctioned or being executed," superintendent archaeologist of Aurangabad circle Milan Kumar Chauley told PTI.

Of the 34 caves in the complex, cave number 16, popularly known as Kailash Cave, is a double-storey structure and tourists have to climb a staircase or go up a ramp to enjoy the view from the top, he said.

While the cave has a staircase and a ramp for smooth movement of wheelchairs, the ASI has proposed the installation of small lifts on both sides of the structure, he said.

"There will be no construction activity for installing these lifts. The mechanism will be small with 9 square feet area, in which a person in a wheelchair can easily go to the first floor," the official said.

The move will make Ellora the first world heritage site in the country under the ASI to have a lift facility, Chauley said, adding that the higher authorities had given principle approval for the project earlier this month.

Tourists will also be able to see Kailash Cave, a single monolithic structure surrounded by hills, from the top and a route for the same will be constructed on the upper hill, he said.

The ASI plans to install lights for some paintings and carry out conservation work on some parts and the paperwork is underway to figure out the cost of the project, the official said.

The ASI has been undertaking several small improvements to make the cave complex, which sees the footfall of 2,000 to 3,000 visitors including international travellers on a regular day, more accessible and tourist friendly.

"We plan to increase the number of ticket counters at Ellora and set up a centralised counter for visitors who want to hire guides. There will be a single entry and exit point for the complex and we also plan to do some landscaping with selfie points for tourists to make the experience more enjoyable," Chauley said.

The ASI plans to set up three to four toilet blocks with sanitary pad disposal machines as well, he said, adding that the electric vehicle service in the cave premises will commence next month.

All these projects were in different stages of sanction and implementation, and may take a year to complete, Chauley said.