The CWC passed three resolutions, one on the political situation, and two others on inflation and a diabolical attack on India's farmers, says KC Venugopal 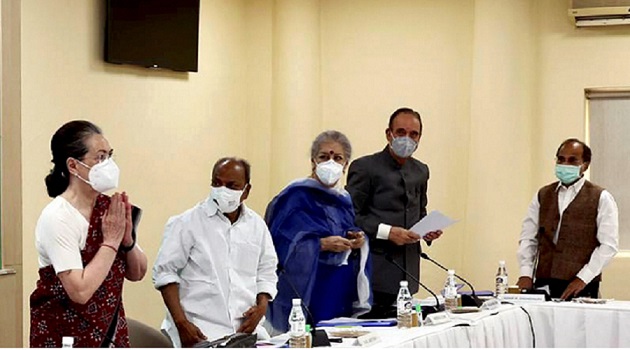 Election of the new Congress president will be held between August 21 and September 20 next year, the party announced on Saturday after the crucial meeting of its working committee which approved the schedule for organisational polls at various levels.

After a nearly five-hour-long meeting of the Congress Working Committee (CWC), Congress general secretary (oganisation)K C Venugopal announced the election schedule which includes a massive membership drive for the polls starting from November 1, 2021 and will go on till March 31, 2022.

Election of Congress president will be held between August 21-September 20, 2022, he said.

Venugopal also announced that election of CWC members and other bodies by AICC members will take place at a plenary session dates for which will be announced later.

The CWC also passed three resolutions, one on the political situation, and two others on inflation and a "diabolical attack" on India's farmers, Venugopal said at a press conference with the party's chief spokesperson Randeep Surjewala by his side at the AICC headquarters here.

Former Congress chief Rahul Gandhi, general secretary Priyanka Gandhi Vadra, three Congress chief ministers, among others, attended the meeting, the first such physical meet of the CWC since the outbreak of the COVID-19 pandemic.