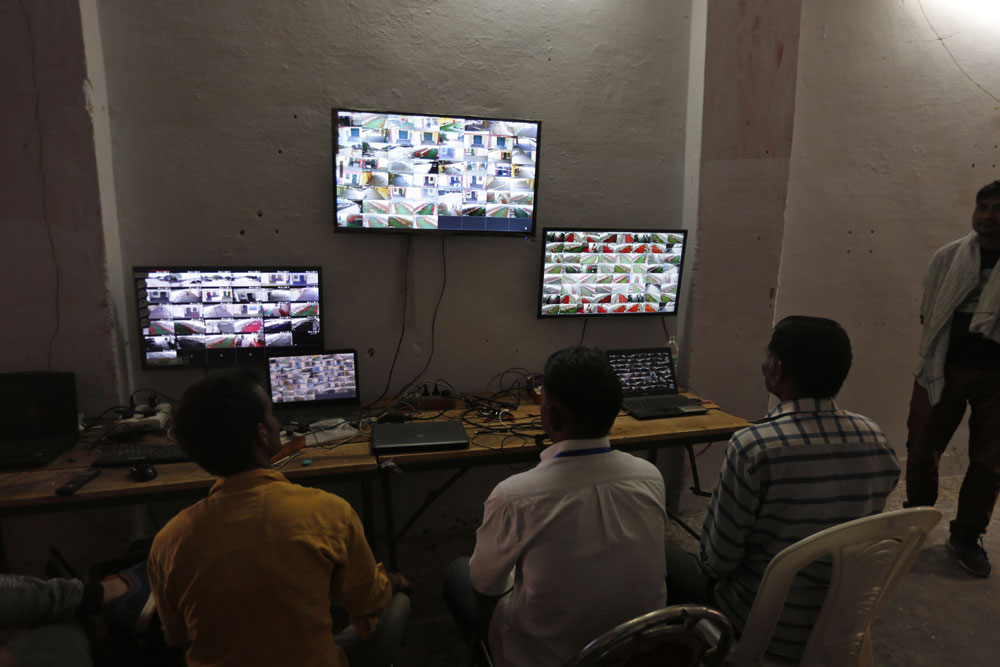 As the cliché goes, all eyes on the eve of result day should have been on the men and women who fought the general election. Instead, the eyes were all fixated on the voting machines as the countdown to the count entered the final hours.

Congress president Rahul Gandhi summed up the mood in the Opposition camp: “Dear Congress workers, the next 24 hours are very important. Be alert and keep vigil. Don’t be afraid. You are fighting for truth….”

The Opposition’s fears were aggravated by the Election Commission’s formal rejection of a demand to first tally the votes recorded on slips with that on select machines and then start the count.

However, counting will be slow and significant trends are not expected before noon and results not before evening, a senior official said. The counting will begin at 8am on Thursday.

“Counting staff have been instructed to follow every procedure perfectly so that every counting agent (of candidates) is satisfied before each round. In a closely contested election, such as this one, we expect counting agents to raise objections. When this happens, the counting is stalled until the matter is resolved,” the official said.

Trends are announced after every round of counting. A round usually has 14 EVMs, but can differ according to the size of the counting hall.

The final declaration of results will be made after the paper trail verification in the mandated polling stations. India has 4,125 Assembly segments. Polling in Vellore, which has six Assembly segments, has been rescinded. Five Union territories, which don’t have Assemblies, will have five VVPATs tallied for each of their Lok Sabha seats. In all 20,720 VVPATs will be tallied for the 542 seats that went to the polls.

Sometimes, officials mistakenly forget to clear votes of the mock poll done for polling agents before voting begins. For these booths and for those where the EVM control unit display malfunctions, the EVM counting unit is set aside. The VVPAT count is relied upon for these booths, and they are counted as a separate round.

Counting will initially begin with the electronically transmitted postal ballot for defence personnel. This requires the returning officer, or any other designated officer, to receive a one-time password on a pre-declared mobile phone. Only this phone is allowed inside the counting centre, and it is switched off after receiving the OTP. Each vote is tallied using a QR code reader. In certain Haryana seats, there are more than 10,000 such votes per seat. This could take several hours to count.

After this, postal votes are counted, followed by the EVMs. After the EVM rounds are completed, the VVPATs are counted for malfunctioning EVMs, those where mock votes have not been cleared, and those demanded by candidates under Section 56D of the Conduct of Election Rules. The VVPAT verification only takes places in the end.

In its affidavit to the Supreme Court on March 29, the EC had said: “It is submitted that in the circumstances that more than one VVPAT is to be counted, sequential counting after each round of counting of the EVM votes is essential in the considered opinion of the Election Commission of India.”

However, in its instructions to the chief electoral officers on April 15, the VVPAT verification has been scheduled only after the completion of the counting.

Amid concerns over EVM tampering, 22 Opposition parties had met the EC on Tuesday to request that the paper trail tallying be taken up at the start of counting.

“It has neither been found possible nor feasible to accede to this demand,” the EC said on Wednesday, citing the Supreme Court ruling that said the verification would be done according to existing guidelines.