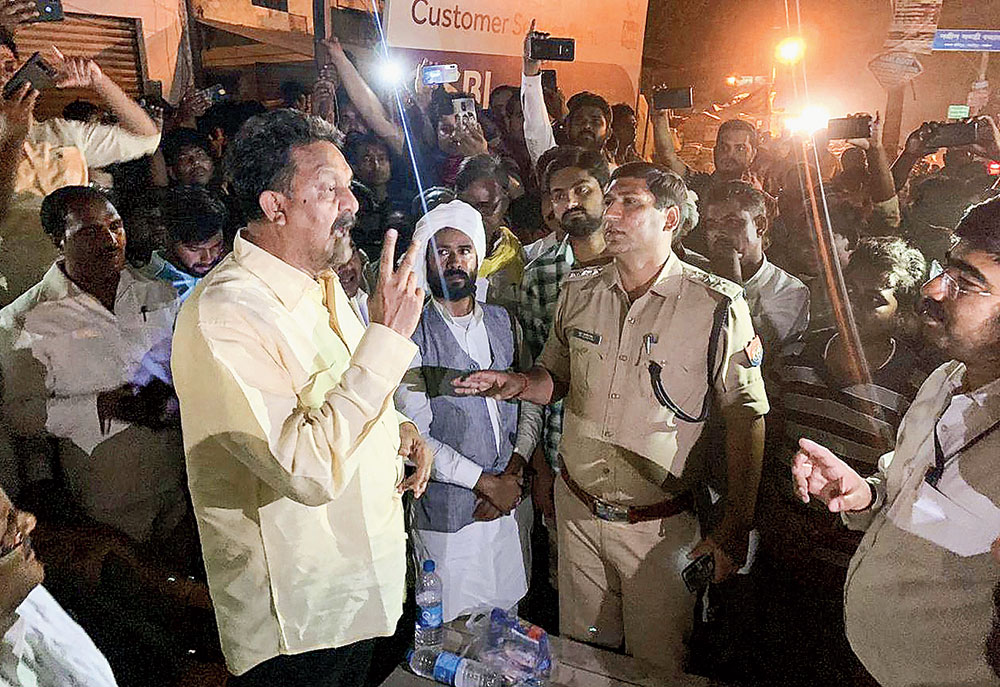 Uncommon stand-offs linked to electronic voting machines have sprouted in Uttar Pradesh, reflecting the credibility test staring at the divided Election Commission and the depth of mistrust as well as bitterness that have seeped into the polity.

Protests have been reported in at least five places in the heartland against alleged foul play. Although the Election Commission has said the issues have been resolved amicably, the very fact that such allegations could be aired added a menacing dimension to the already fraught post-poll atmosphere.

The protesters have aired the suspicion that attempts were being made to slip in machines that had been preloaded with votes to influence the outcome. The fears have been exacerbated by suggestions that a pre-emptive narrative has already been created through exit polls.

The Election Commission said it would “like to emphatically and unambiguously clarify that all such reports and allegations are absolutely false, and factually incorrect”.

The commission put out a long statement, which prompted former chief election commissioner S.Y. Quraishi to tweet: “You should simplify it. State in one line what’s the finding.”

The following are some of the complaints and the Election Commission’s response:

Afzal Ansari, who contested from Ghazipur in east Uttar Pradesh as the Bahujan Samaj Party-Samajwadi Party alliance nominee, sat on dharna on Monday evening outside the building where electronic voting machines used in the poll had been kept in strong rooms under CRPF security.

Ansari alleged that even those EVMs not used for the May 19 vote had been brought over a day later and kept in the strong rooms inside the Mandi Parishad building in Ghazipur, over 300km from Lucknow.

“We have come to know that they opened the strong rooms illegally and put dubious EVMs there in the evening (Monday). Our workers realised something mysterious was going on and raised the alarm,” Ansari alleged.

He left the place after midnight, leaving his supporters to carry on the vigil outside the compound where the votes will be counted on Thursday after the EVMs are brought out from the strong rooms.

“There are five Assembly segments in the Ghazipur Lok Sabha constituency and the EVMs of each segment have been kept separately,” Ansari said on Tuesday. “We don’t trust the officers and want three passes for my representatives in each segment to keep a close watch so that such acts (keeping used and unused EVMs together) are not repeated. But the officers are not listening to us.”

Receipt centres house the strong rooms where the EVMs are kept. Counting usually takes place on the premises but can be shifted to a nearby place for convenience.

The EC said on Tuesday: “In Ghazipur, a demand was made by a candidate to allow up to five representatives for an eight-hour shift to keep watch on the strong room where the EVMs are kept. The district administration has allowed one representative for each shift to all the candidates so that any large gathering is avoided in view of security concern.”

The commission did not refer to the specific allegation that the reserve EVMs were brought in separately on Monday evening in violation of the rules.

Asked about this, a commission spokesperson drew attention to a sentence in the EC statement that said: “However, any case of lapse even in handling of reserve EVMs is thoroughly investigated and disciplinary action taken against the officers responsible.”

On Monday afternoon, 35 EVMs not used during Sunday’s vote were brought in two mini-trucks from Sakaldiha to strong rooms inside the Navin Mandi building in Chandauli, around 340km from Lucknow, it has been alleged.

“I can challenge the Election Commission to open those EVMs and prove that they were not pre-loaded with votes for the BJP,” said Prabhu Narayan Singh Yadav, the local SP MLA, who sat on dharna outside the building’s gate for about four hours.

“Our party workers had blocked the gate of Navin Mandi, the venue of the counting on May 23, to prevent the entry of the mini-trucks into the prohibited area,” Yadav said. “The officers claimed they were reserve and unused EVMs sent by the Election Commission…. The officers threatened us but later took those EVMs away when the number of our supporters increased.”

Ram Sajivan Maurya, the sub-divisional magistrate who had brought the “reserve and unused EVMs”, said the machines were taken back to the Sakaldiha tehsil office — from where they had been brought in mini-trucks — because political workers didn’t want them to be kept on the same premises where the used machines had been kept.

The EC said: “Reserved/unused EVMs and VVPATs were kept in the allocated strong room on the premises (in Chandauli) with prior intimation to all the political parties/ candidates. This was objected to by the representatives of a particular political party and they suggested to shift these unused/reserved EVMs to the collectorate office, which was done in the presence of all concerned.”

Again, there was no specific reference to the allegation that the reserve EVMs were brought in on Monday afternoon.

Police baton-charged BSP-SP workers in the Ghosi Lok Sabha seat in Mau, 300km from Lucknow, on Monday evening. The activists had organised a dharna, accusing the local administration of bringing “dubious EVMs”. “Instead of explaining their conduct, the police wielded lathis to terrorise us,” Atul Rai, the alliance candidate, said.

Gyan Prakash Tripathi, district magistrate of Mau, said: “It was only a rumour that something wrong was going on there. We have issued passes to two agents of each party to keep a watch.”

Shyam Sundar Singh Yadav and Shiv Saran Kushwaha, candidates of the BSP-SP alliance and the Congress in Jhansi, had alleged that some EVMs were brought into the strong rooms on April 30 morning, more than 12 hours after the fourth phase of the elections.

They had alleged this was a game plan to replace the EVMs that were used for the vote to benefit Anurag Sharma, the BJP nominee from Jhansi, 315km from Lucknow.

Chief electoral officer said: Lakku Venkateshwarlu, the Uttar Pradesh chief electoral officer who held a media conference in Lucknow as the air thickened with conspiracy theories, quoted a local officer to say that some booths were far away from the district headquarters and it took time for poll officials to submit the EVMs.

Venkateshwarlu added that the guidelines were followed meticulously.

The official said “similar complaints” had been received from Dumariyaganj (Siddharthnagar district), which voted on May 12.

“We had explained everything to the agents of all the parties. I appeal to the people and the media not to be a part of rumour-mongering,” the official added.

Opposition parties focus on EVM instead of exit polls