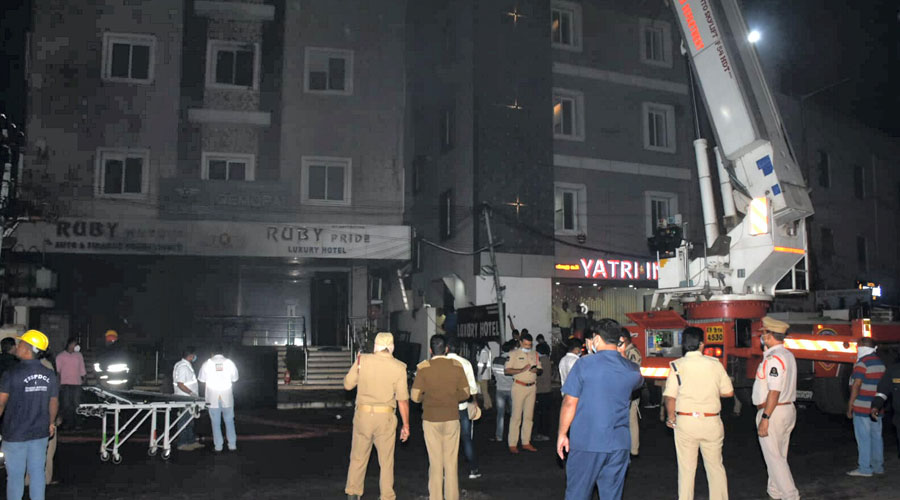 Eight people, including a woman staying in a hotel were killed in a midnight fire that originated from an electric bike showroom located below, in Secunderabad area here.

Seven others were injured and they were rushed to various hospitals, police said on Monday. Most of the victims were asphyxiated.

Prime Minister Narendra Modi and Telangana Minister K T Ramarao condoled the loss of lives and announced ex-gratia on behalf of the Centre and the state government, respectively.

The fire and smoke from the showroom engulfed Hotel Ruby Pride situated above the showroom killing the victims.

"It appears there are 23 rooms in all the four floors in the hotel. The smoke traversed through the staircase from the bottom up to the top floor and completely engulfed all floors."

"Some people who were sleeping in the first and second floors came to the corridor through the thick smoke and died due to asphyxiation," Hyderabad Police Commissioner CV Anand who visited the spot told reporters.

"Exact reasons for fire, whether it is due to short circuit or charging of batteries in the cellar or in the first floor where the scooter showroom is located, will be known after the Fire Department's investigation," he said.

"The cellar which usually should be used for parking--obviously they are doing something else. That is a matter of inquiry," the official added.

About 24 people were said to be staying in the hotel at the time of the incident.

Firefighters rushed to the spot and rescued seven guests, who were trapped in the multi-storeyed building. They were shifted to hospitals.

TV visuals suggested that some people tried to jump out of the hotel windows in a bid to escape the fire.

Modi said he was saddened by the loss of lives and announced Rs two lakh under the Prime Minister's National Relief Fund.

Telangana Minister for IT and Industries KT Rama Rao, expressing grief over the incident, in a statement said the state government will offer Rs three lakh as ex-gratia to the families of the deceased.