The army of desert locusts marauding through Rajasthan and MP, rushing towards Maharashtra, making Karnataka shudder and putting Telangana on alert, is actually billions of grasshoppers gone rogue 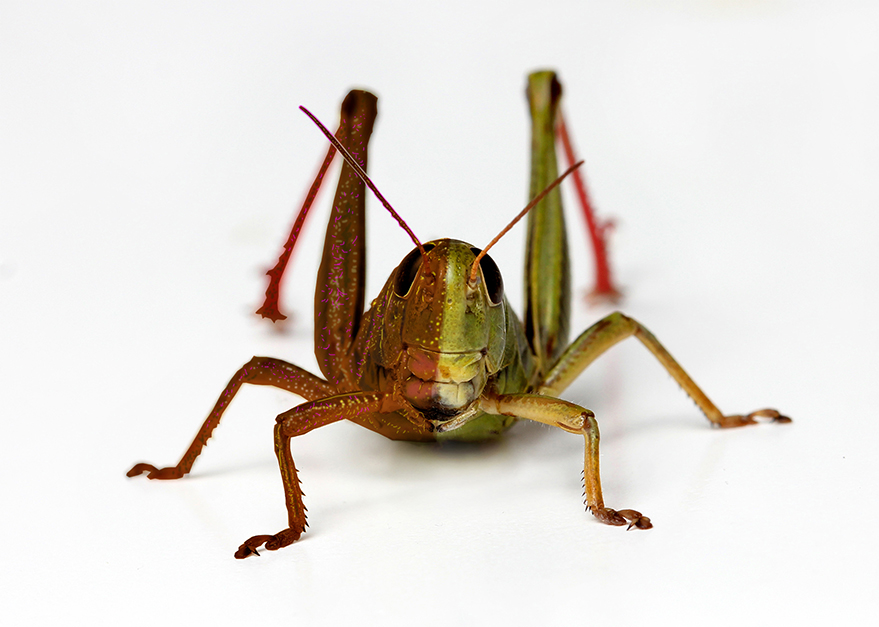 A locust is a special type of short-horned grasshopper. The type recently spied in Africa and Asia has been identified as the Schistocerca gregaria or the desert locust.
Image credit: iStock Imaging credit: Sabyasachi Kundu
Prasun Chaudhuri   |     |   Published 31.05.20, 02:51 AM

On the menu... but conditions apply

Locusts cause acute food shortage, but for a while scientists have been working on how to turn them into food for fish, poultry, farm animals and even humans. “Edible insects have always been a part of human diet in many societies, some of these in India too,” says Amlan Das, an entomologist and associate professor at Calcutta University.

Locusts are high in protein, fatty acids and minerals such as zinc and iron. In many countries, desert locusts are collected using large nets. They are then stir-fried, roasted or boiled and eaten immediately or dried and consumed later. “Locust flour can be used in a number of ways, such as energy bars, snacks and sandwiches. It can be used to improve the taste and nutritional content of any food,” says Das, whose area of expertise is edible insects. The protein content of locust flour is quite high, approximately 78 per cent. Locusts are the only insects considered fit for human consumption under the Jewish dietary law, and recently, Pakistan’s minister for agriculture Ismail Rahu suggested that citizens could combat the menace by cooking biryani with the bugs. Says Das, “He was not joking.”

But there’s a warning attached: only those insects that have been cultured or reared commercially can be consumed. It is a fact that many communities collect insects from forest habitats, but this can have dangerous consequences such as a virus/bacteria jumping species and infecting humans.

After the virus, here come the locusts. The latest United Nations’ desert locust situation update of May 27 reads: “Swarms move into northern India.” The update also mentions movement of adult groups and swarms across Oman, the UAE and Uganda. There are references to Pakistan, Iran, Yemen and Saudi Arabia. And the update on East Africa reads thus: “The current situation remains extremely alarming... New swarms from current breeding will form from mid-June onwards.”

Locusts typically devour native vegetation, staple crop, even orchards. According to the United Nations Food and Agriculture Organisation, or FAO, estimates, a swarm of 40 million locusts can eat as much food as 35,000 humans, which means in a world already put out of joint by the coronavirus, this invasion could push hundreds of thousands of people to the brink of starvation.

Desert locusts have been attacking the Horn of Africa, the Middle East and Pakistan for quite some time now. This is not the first time that India is experiencing a locust invasion either. These insects typically attack parts of western India, especially Gujarat and Rajasthan, between June and November. However, this year’s attack has been the worst in decades.

The ministry of agriculture’s locust warning organisation spotted the advancing swarms as early as April 11. But as there were no standing crops to feed on this time of the year, experts explain, the swarms travelled farther and continue to do so. “It’s good that the rabi crop has already been harvested in many parts of western India,” says Parthiba Basu, who is the director of Calcutta University’s Centre for Agroecology and Pollination Studies. He adds, “But farmers across Pakistan have suffered the worst plague of locusts in recent history. These pests have affected the pulse crops in central India to some extent. Farmers in Bengal must also harvest whatever boro crops remain in the fields.” Mercifully, there is no forecast yet of the locusts moving towards eastern India.

A locust is a special type of short-horned grasshopper. The type recently spied in Africa and Asia has been identified as the Schistocerca gregaria or the desert locust.

According to experts at United Nations Environment Programme, during quiet periods — known as recessions — desert locusts are usually restricted to the semi-arid and arid deserts of Africa, and West and Southwest Asia that receive less than 200 millimetres of rain annually. In normal conditions, locust numbers decrease either by natural mortality or through migration.

But the last five years have been one of the hottest periods in human history since the Industrial Revolution, according to an estimate by the World Meteorological Organization. Some studies have attributed this sudden warming of the planet to the proliferation of locust swarms, while others have blamed the increased numbers on abnormal rains and rare cyclones related to the Indian Ocean Dipole, a difference in ocean temperature brought about by climate change.

The truth possibly lies somewhere between. There are locust species that are highly adaptive to life in extreme heat as well as heavy rains. This means that most other creatures may struggle to adapt to extreme weather conditions but these insects are likely to thrive no matter what.

According to Basu, the desert locust is an introvert and content to lead a lonesome life. He says, “This kind of living is called the solitarious phase.” But an alteration in environmental conditions brings about a change in its appearance and behaviour. “Around 20 species of the 7,000 known grasshopper varieties can change themselves into gregarious types,” says Basu.

The insect changes colour from a leafy green to a drab tan or a striking yellow-and-black, suddenly becomes very social and is possessed of a voracious appetite. Aided by newly-developed muscles, it sweeps through distant geographies in large swarms and at great speed.

“The change in physical appearance is in keeping with the change in personality. From being a near-invisible creature, almost lost in the surrounding green, the locust swarm takes on the character of a lynch mob, turns into gatta-gotta mastaans (robust rogues)... The greed forces them to feed and breed voraciously,” explains Basu. The bugs before and after transformation are so different that until the 1920s entomologists thought they were two different species.

It seems a common chemical in the brain is behind this diabolical transformation. Basu pins the blame on serotonin. Serotonin helps in the transmission of messages between nerve cells. In humans, it is thought to impact appetite, emotions, motor, cognitive and autonomic functions. High levels of serotonin contribute to feelings of well-being and happiness.

Scientists from three universities in the UK and Australia, who are researching locusts, claim the metamorphosis from solitary to gregarious begins when locusts are driven to congregate by environmental conditions, see and smell one another and touch and rub one another’s hind legs. This leads to a serotonin surge.

Researchers in laboratories tickled the insects’ legs and studied the surge. Next, they injected them with drugs that block serotonin action or inhibit the production of the chemical in the body and found there was no metamorphosis. The study was published in the US-based journal, Science, in 2009.

Given that the serotonin connection was established a decade ago, one would have thought that the most effective solution would be to spray serotonin blocking drugs on locust swarms. It probably would, agree experts, but they also warn that such chemicals might have an adverse effect on other creatures, including humans. And that is possibly why, today, most African nations and the West Asian countries spray millions of litres of insecticides over fields to contain the swarms. “The pesticides that work best are old-generation chemicals, such as organo-phosphates,” says Basu. “These have adverse effects on the flora and fauna around the field,” he adds.

Concern over how to manage the locust menace came up at the World Economic Forum earlier this January and a study from The Conversation, an international science journal, was quoted. On ways of containment, The Conversation observed: “Perhaps more promising are so-called biological control mechanisms. Natural predators such as wasps, birds and reptiles may prove effective at keeping small swarms at bay. However, for managing more established swarms, newly-developed targeted microbial biopesticedes, such as the fungus-based ‘Green Muscle’, offer a larger-scale solution.

However, one of the most effective ways to avoid the devastating effects of locust plagues is to prevent them from happening in the first place...” The problem is locusts often speed ahead of the curve. Pakistan, a chronic victim of the scourge, has meantime attempted a new approach. Farmers in Okara district, part of Pakistan’s Punjab province, have been encouraged to trap locusts are turn them into poultry feed. Locusts are perhaps what the lotus-eating ducks Pakistan imports from Zhejiang in China, fatten on.