A new set of economic data put out by a sub-committee of the National Statistical Commission has shown that the UPA government under Prime Minister Manmohan Singh clocked a double-digit growth rate of 10.08 per cent in 2006-07. 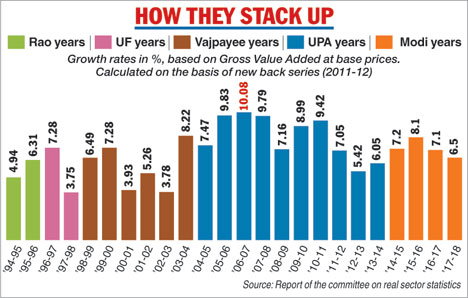 New Delhi: A new set of economic data put out by a sub-committee of the National Statistical Commission has shown that the UPA government under Prime Minister Manmohan Singh clocked a double-digit growth rate of 10.08 per cent in 2006-07.

The new calculations have to be vetted by the Central Statistical Commission and by a standards authority before they become officially acceptable.

If the figure holds even after that scrutiny, the 10.08 per cent growth in gross value added (GVA) - the new metric that strips out the impact of product taxes and subsidies - achieved in the third year of UPA-I rule means the Manmohan government had achieved double-digit growth, which has been generally regarded as an elusive pie-in-the-sky dream.

The best growth rate the Modi government has achieved during its four years in office is 8.1 per cent in 2015-16.

The highest-ever growth rate since Independence was recorded at 10.2 per cent in 1988-89 when Rajiv Gandhi was Prime Minister. GDP growth had crossed into double digits for the first time on the back of a 15.4 per cent agricultural growth. Since that was measured on a different base year, the figures of the Rajiv years and the Manmohan years are not comparable.

The latest set of data was finalised on July 15 and placed in the public domain recently.

The National Statistical Commission's sub-committee was headed by Sudipto Mundle, emeritus professor with the National Institute of Public Policy.

The spinmeisters of the Congress are cock-a-hoop. "The GDP back series data is finally out. It proves that like-for-like, the economy under both UPA terms (10-year average: 8.1 per cent) outperformed the Modi Govt (average: 7.3 per cent)," the Congress party said in a tweet.

"The UPA also delivered the ONLY instance of double digit annual growth in modern Indian history," it added.

Pronab Sen, a former chairman of the National Statistical Commission, said: "Back calculations based on the new series based on factor costs do show that we grew by 10.08 per cent, which means we hit double digits... an achievement by itself."

India grew by 6.7 per cent in 2017-18, after slower industrial growth on the back of a botched-up introduction of GST shaved off growth in second quarter of the year. In the first four years of the NDA rule, the growth rate averaged 7.2 per cent, which is reasonably good. But the UPA can well argue that they fared better if the new series is taken into account.

The base year for national accounts was changed from 2004-05 to 2011-12 on January 30, 2015 - a little over six months after the Narendra Modi government came to power. Economists had then expressed deep scepticism over the growth rates achieved by the Modi regime in the absence of a back series - a lacuna that the Mundle committee report now removes.

Since the new base year was introduced, the Central Statistics Office has come out with comparative figures using the base year of 2011-12 only for two years of UPA-II: 2012-13 and 2013-14.

The Mundle committee report puts these figures at 5.42 per cent and 6.05 per cent, which is almost the same as the CSO estimates.

The committee on real sector statistics is one of these professional committees constituted by the National Statistical Commission chaired by Radha Binod Barman (the Barman commission) on October 5, 2016. The committee had 26 members, including Mundle.

The committee has identified several data gaps in the methodology currently employed by the CSO in estimating sectoral growth rates.

For instance, the report says: "It needs to be underscored that in the provisional estimates of GDP and in the quarterly estimates of GDP, the index of industrial production (IIP) is being used as an indicator not only for the household sector and the quasi-corporate sector but also for the unincorporated factory sector of manufacturing. This may lead to some deficiencies in the estimates obtained."

The report adds: "The use of IIP as an indicator for making GVA (gross value added) estimates has two problems. First, it understates the growth in real GVA taking place in the organized manufacturing sector and second, growth in IIP (being based on production data for organized sector units) may not correctly show the growth that is taking place in the informal segment of manufacturing."

It also identified "serious data gaps in respect of compilation of national accounts for the organised sector as well".

"The data on private corporate sector available from the Ministry of Company Affairs do not provide accurate information on economic activity (NIC code) and that required for distributing national level estimates over the States," the report said.