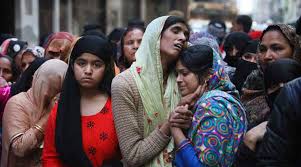 “The objective is to bring correct facts in front of the public. It may not be admissible in a court of law… We will conduct the proceedings on the lines a commission of inquiry follows.”
File picture
Pheroze L. Vincent   |   New Delhi   |   Published 13.10.20, 01:46 AM

Several senior retired judges and bureaucrats have formed a committee headed by former Supreme Court judge Madan B. Lokur to probe the Delhi riots, in the light of “extensive critical commentary” of the investigations by Delhi police.

All of them are part of the Constitutional Conduct Group (CCG), a collective that has spoken out against the harassment of anti-CAA activists on the pretext of investigation into the riots.

A member of the panel told The Telegraph: “We cannot force anyone to testify, but notices will be issued to ask people to submit affidavits. We will also ask the authorities to explain what they are doing. We will examine information such as FIRs and chargesheets which are in the public domain.”

The source added: “The objective is to bring correct facts in front of the public. It may not be admissible in a court of law… We will conduct the proceedings on the lines a commission of inquiry follows.”

In 2018, Justice Lokur had addressed a news conference along with fellow apex court judges Ranjan Gogoi, Kurian Joseph and J. Chelameswar, to speak out against the functioning of then Chief Justice of India Dipak Misra. Pillai had criticised the previous Congress-led government for giving two affidavits on the Ishrat Jahan fake encounter case, one of which omitted to mention that those killed were members of the Lashkar-e-Toiba.

The collective said in a statement: “Considering the horrific nature of the riots in North-East Delhi in February 2020, the scale of violence, the loss of lives and the resulting communal divide between communities, we felt that an expert body should carry out a thorough examination of what transpired before, during and after the riots. This has become even more necessary as the investigation carried out into the riots by the Delhi police has evoked extensive critical commentary in recent times. We therefore conclude that a Committee with credible reputations in the higher judiciary, the civil service and the police would be best suited to contribute to an objective and fair understanding of the riots and their aftermath.”

The terms of reference, stated by the group, are: “1. To inquire into the events that transpired before and during the riots, including the response of the state machinery in dealing with the violence, restoring law and order, and related matters; 2. To analyse and assess the response of the police in investigating the riots; 3. To examine the role of the mainstream and social media in spreading information, both genuine and fake, before, during and after the riots, and its impact on events, and 4. To assess the civic administration’s efforts at providing relief and extending reparations to the victims of riots.”

In the recent past, the police had ignored requests for information from a Delhi Minority Commission probe that accused BJP leaders, including Union home minister Amit Shah and Uttar Pradesh chief minister Yogi Adityanath, of inciting the riots in February that killed 53 people.

No “commission of inquiry” has been instituted for the riots so far. In Delhi, only the Centre has the powers to set up such a commission before whom witnesses can be compelled to depose.