Over 200 demand release of Umar Khalid, projected as a jihadi and a figure of hate by sections of a compromised Indian media 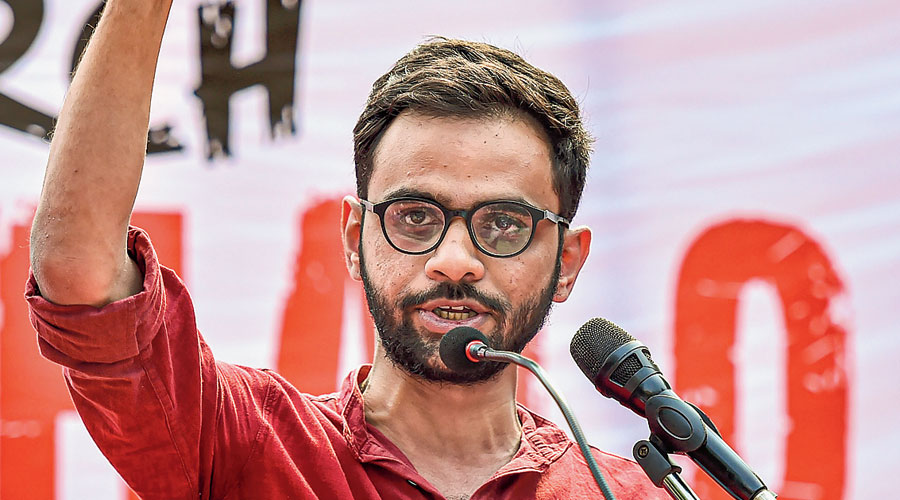 Umar Khalid was sent to judicial custody till October 22 by a Delhi court on Thursday after police desisted from seeking his further custody. Khalid told the court he did not sign any document during police custody
File picture
Pheroze L. Vincent   |   New Delhi   |   Published 25.09.20, 01:37 AM

More than 200 scholars, writers and artistes on Thursday demanded the release of Umar Khalid and other social activists arrested in connection with the Delhi riots and the protests against the new citizenship regime, denouncing the action as a “premeditated witch-hunt” against “India’s best and brightest”.

They said in a statement: “Currently, 19 of the 21 people falsely accused under terror laws (in connection with the February riots) are Muslim. If we allow their identity to become their crime, India shall stand shamed in the global community of secular nations. These people are not terrorists, and the police investigation into the Delhi riots is not an investigation. It is a pre-meditated witch-hunt.”

Demanding the release of Khalid and others arrested for protesting against the new citizenship matrix “that denies equal citizenship rights”, the signatories said: “We stand in solidarity and outrage with the brave young scholar and activist Umar Khalid, arrested in New Delhi on September 14, 2020, under fabricated charges of engineering the Delhi riots in February 2020….

“This process of criminalising all dissent has been underway for a few years and even under a Covid-19 pandemic, relentless political arrests under fabricated charges are punishing the innocent long before they are brought to trial.”

They added: “He (Khalid) has been projected as a jihadi and a figure of hate by sections of a compromised Indian media, not only because he speaks persuasively against government policies that he believes are unjust, but also because he is Muslim.

“Today Umar Khalid joins a long list of those targeted, implicated and unjustly incarcerated under the UAPA (Unlawful Activities Prevention Act), only because they were active in the equal citizenship movement, against the CAA-NRC. To send its chilling message to all critics, the State has chosen India’s best and brightest; the young, the fearless, the dreamers of a better country, where inequality is not a bitter pill for some to swallow but a vile aberration to be fought against at all times.”

The statement comes days after the police denied, in a chargesheet, that BJP leader Kapil Mishra had delivered a provocative speech before large-scale rioting started and that he was merely conveying his intention to cops to start protesting if they did not clear a road in northeast Delhi of those agitating against the new citizenship regime.
Delhi High Court had pulled up the police for not acting against Mishra and played his speech in court.

The signatories said: “Although between December 2019 and February 2020, leaders from the Bharatiya Janata Party (BJP) gave hate speeches inciting their supporters to ‘shoot the traitors’, no cases have been registered against them. The role of BJP leader Kapil Mishra has shockingly not attracted the merest police scrutiny; even though he stood in Northeast Delhi on February 23, 2020, along with the deputy commissioner of police and threatened that his supporters would ‘take matters into their own hands’ if the CAA protesters were not removed.”