Delhi outsources ‘China’ to US 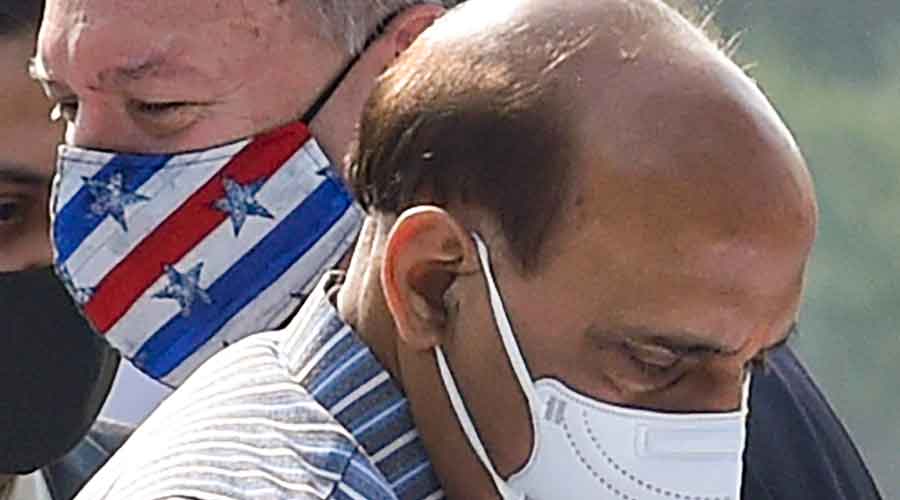 The Narendra Modi government’s reluctance to name China as an aggressor stood out again on Tuesday during the media interaction after the 2+2 dialogue with the US.

The visitors from the US spoke out against Chinese aggression which their Indian interlocutors — ministers Rajnath Singh and S. Jaishankar — studiously avoided, preferring the usual euphemisms instead.

Both US secretary of state Mike Pompeo and secretary of defence Mark T. Esper brought up China in their remarks to the media with the former making a specific reference to the 20 Indian soldiers killed in the Galwan Valley clash.

Referring to his morning visit to the National War Memorial, Pompeo said it was to honour the brave Indian men and women who have sacrificed their lives for the world’s largest democracy, “including 20 who were killed by the PLA forces in the Galwan Valley in June. The US will stand with the people of India as they confront threats to their sovereignty and to their liberty”.

Detailing the discussions in the 2+2 format as also the one-to-one meeting he had with external affairs minister Jaishankar, the US secretary of state said: “The challenge of defeating the pandemic that came from Wuhan also fed into our robust discussions about the Chinese Communist Party (CCP). Our leaders and our citizens see with increasing clarity that the CCP is no friend to democracy, the rule of law, transparency nor to freedom of navigation — the foundation to a free and open and prosperous Indo-Pacific.”

Pompeo said: “I am glad to say that the US and India are taking steps to strengthen our cooperation against all manner of threats and not just those posed by the CCP.”

Earlier, Esper too had brought up China, asserting that “we stand shoulder to shoulder in support of a free and open Indo-Pacific for all, particularly in light of increasing aggression and destabilising activities by China”.

By contrast, the two Indian ministers avoided naming China while referring to the need for upholding the territorial integrity and sovereignty of all states.

In his remarks to the media, Jaishankar said: “The Indo-Pacific region was a particular focus of our talks. We reiterated the importance of peace, stability and prosperity for all countries in this region. As Raksha Mantri stated, this is possible only by upholding the rules based international order, ensuring the freedom of navigation in the international seas, promoting open connectivity and respecting the territorial integrity and sovereignty of all states. A multi-polar world must have a multi-polar Asia as its basis.’’

Later, Jaishankar responded to a specific question on whether China was a factor for the series of engagements that India has had with the US in the past few weeks — that, too, so close to the U.S. presidential elections.

Jaishankar said: “As for the factor for holding these meetings, there are two — one is called India and the other is called the United States of America. This is a relationship that serves our national interests... also Indo-US collaboration can be a force of good. In that sense, it is truly global, it is truly comprehensive, it is truly strategic and that’s the reason why we are meeting.’’

An official release by the State Department of the remarks made by the four principals at the 2+2 meeting quoted defence minister Rajnath as saying: “In the area of defence, we are challenged by reckless aggression on our northern borders.”

According to the release, this is “via interpreter” and the remaining part is marked “inaudible’’. The defence ministry did not put out Rajnath’s opening remarks at the meeting even after the American release was flagged to them.

Rajnath was non-committal, asked if the growing military cooperation with the US would mean India would be distancing itself from Russian weapons suppliers. “Purchases are dependent on negotiations,” the minister replied, indicating that India was keeping both options open and sidestepping the specifics of the S-400 deal with Russia that the US has opposed.

The joint statement appears to have taken on board India’s apprehensions in naming China, in view of the ongoing negotiations to resolve the situation along the Line of Actual Control and also the different dynamics at play, given the geographic proximity as compared to the US. As a consequence, there is no naming of China in the statement.

But it dwells at length on the Indo-Pacific that is a pet subject of the Trump administration and a crucial part of Washington’s China-containment policy.

According to the joint statement, the two sides reaffirmed that closer India-US cooperation will support shared interests in promoting security and prosperity in the Indo-Pacific region and beyond. They also emphasised that the Code of Conduct in the South China Sea (SCS) should not prejudice the legitimate rights and interests of any nation in accordance with international law.

The Code of Conduct in the South China Sea refers to the effort by China and Asean over the past decade to evolve a set of regional norms and rules in the SCS to avoid conflicts in disputed waters. China’s Nine Dash Line covers most of the SCS and overlaps with the exclusive economic zones of several countries including Indonesia, Malaysia, Brunei and Vietnam besides Taiwan which Beijing considers part of its territory.

In defence, the last of the foundational agreements materialised with the signing of BECA (Basic Exchange and Cooperation Agreement), making Pompeo state that the two countries have entered into a new age of ambition. This comes on the heels of more institutionalised liaison between the two militaries over the past couple of years.

According to Esper, there is a resolve to cooperate further in cyber and space and the joint statement also refers to cooperation on dealing with the pandemic in a clear desire to build on the experience of developing and distributing ROTAVAC vaccine against Rotavirus.

“Recognising that bilateral engagement in the research & development and the mass production of vaccines and therapeutics plays to our respective strengths, the ministers sought to jointly promote access to high quality, safe, effective and affordable Covid-19 vaccines and treatments on a global scale,” the statement said.

US help to watch China