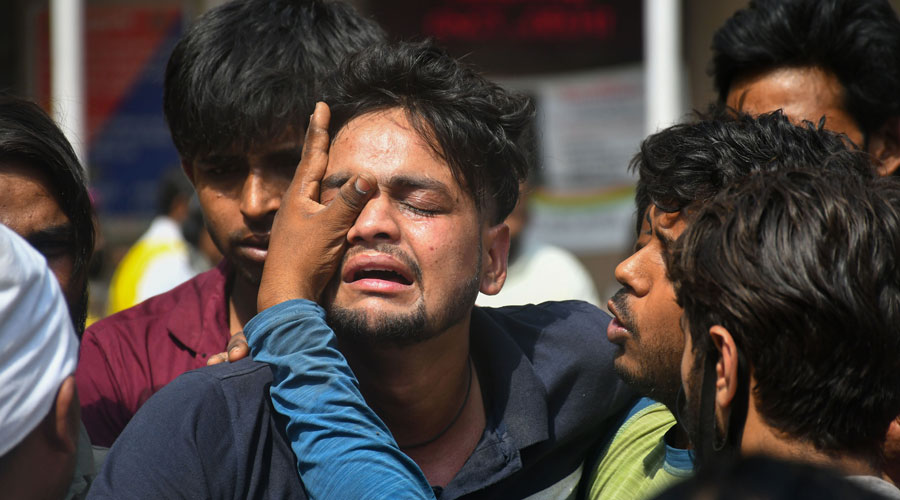 Family members of the missing people who are unsure about their whereabouts react after a massive fire at an office building near the Mundka Metro Station, outside Sanjay Gandhi Memorial Hospital in New Delhi on Saturday.
PTI Photo
Our Bureau, PTI   |   New Delhi   |   Published 14.05.22, 12:33 PM

A day after the massive fire at a four-storey building left at least 27 people dead and many missing, distraught relatives at the Sanjay Gandhi Hospital here were still looking for their loved ones.

Among them, are family members of Praveen who said they have been searching for him since the fire broke out at the building in Mundka on Friday.

"We have no idea where he is. The hospital authorities are also not saying anything. Praveen's phone is not reachable. We are just hoping that he is okay," they said.

Many were seen uttering a silent prayer as the fear of the worst loomed large.

The fire had started from the first floor of the commercial building that houses the office of a CCTV camera and router manufacturing and assembling company. It is suspected that an explosion in an AC may have triggered it.

Twenty-one-year-old Monica, who is among the people missing, had started working for the company from last month.

Her brother, Ajit, said, "She received her first salary on Thursday. We got to know about the fire around 5 pm on Friday, but we had no idea that it occurred at her office building. We started looking for her after she did not return home by 7 pm."

Monika lives with her two brothers and a sister in Delhi's Agar Nagar. She is from Gonda district in Uttar Pradesh.

Another woman, frantically looking for her elder daughter who also works at the CCTV camera packaging unit, said she has been searching in other hospitals as well.

"My daughter Pooja has been working at the CCTV camera packaging unit for the last three months. We live in Mubarakpur and got to know about the incident at 9 pm. She has a cut mark below her left eye. We are looking for her at various hospitals. She is the sole breadwinner of our family of four. Her two younger sisters are school students," she said.

According to fire department officials, information about the blaze was received around 4.40 pm following which 24 fire tenders were rushed to the spot.

Ankit, who works at one of the offices in the building, said a motivational session was going on at the second floor when the fire broke out.

"I am very fortunate that I am alive. I could have also lost my life. A motivational session was going on at the second floor of the building when we noticed the blaze. We broke the glass windows and somehow managed to escape," he said.

Another man said his aunt is missing, while some refused to speak to the media.

Meanwhile, Delhi Fire Service (DFS) officials said charred human remains were found on Saturday on the second floor of the building during a search operation.

They said two fire tenders are currently at the spot for cooling operations.

"Charred human remains were found on the second floor of the building during a search operation by our fire fighters. But we cannot say if it is the remains of one body or several bodies. Though the fire has been doused, the cooling and search operations still continues," DFS Director Atul Garg said.

According to Deputy Commissioner of Police (Outer) Sameer Sharma, the company owners -- Harish Goel and Vijay Goel who were detained have been arrested in connection with the incident.

An FIR has been registered against them under sections 304 (punishment for culpable homicide not amounting to murder), 308 (attempt to commit culpable homicide), 120 (concealing design to commit offence punishable with impris onment) and 34 (Common intention) of the Indian Penal Code, he said.

All floors of the building were being used by the same company, the DCP said.

The building's owner, Manish Lakra, has also been booked, the police said.

Identities of all but one of the 12 injured have been ascertained, an official said.

The building in which the fire broke out is located near pillar number 544 of the Mundka metro station.