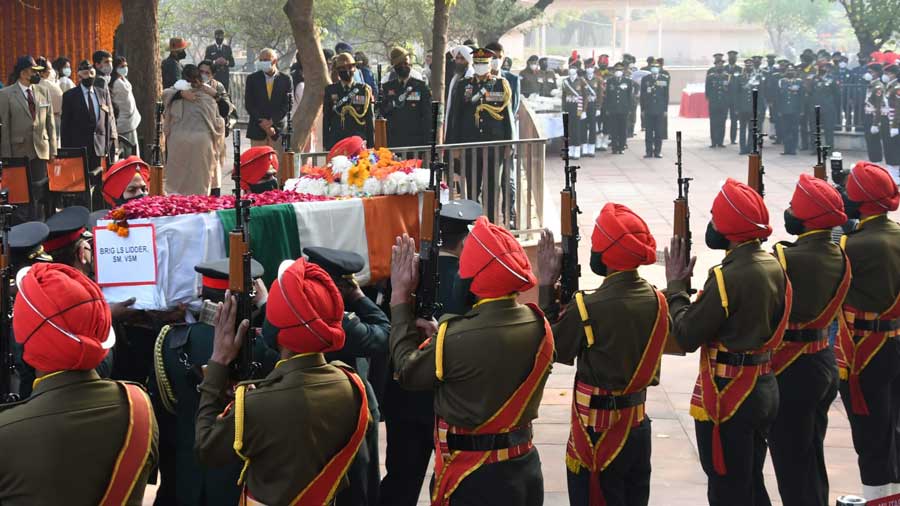 Coffin of Brigadier Lakhwinder Singh Lidder being brought for the last rites at the Brar Square crematorium at Delhi.
Twitter
Our Bureau, PTI   |   New Delhi   |   Published 10.12.21, 11:06 AM

Brigadier Lidder's mortal remains were kept at Brar square in Delhi cantonment before his cremation.

Along with Chief of Defence Staff Bipin Rawat, Lidder was among the 13 killed when a Mi17V5 helicopter carrying them crashed in Tamil Nadu on Wednesday.

He was commissioned in the Jammu and Kashmir Rifles (JAKRIF) in December 1990 and commanded a battalion of the JAKRIF in Congo as UN peacekeeping force. He also commanded a brigade on India's northern borders.

He served as director at the Military Operations Directorate and also as defence assistant at Kazakhstan.

Approved for the Major General rank, he was due to take over a division. He is survived by wife Geetika Lidder and a daughter.

The Centre has ordered a 'tri service' inquiry into the accident. The inquiry will be headed by Air Marshal Manvendra Singh, Air Officer Commanding-in-Chief Training Command. Recently, the black box of the chopper has been recovered from the crash site. A team of Tamil Nadu's Forensic Science Department also visited the crash site.