The carcass was removed from the temple lake and put on public display as hundreds of people, including politicians, turned up for a last glimpse of the crocodile 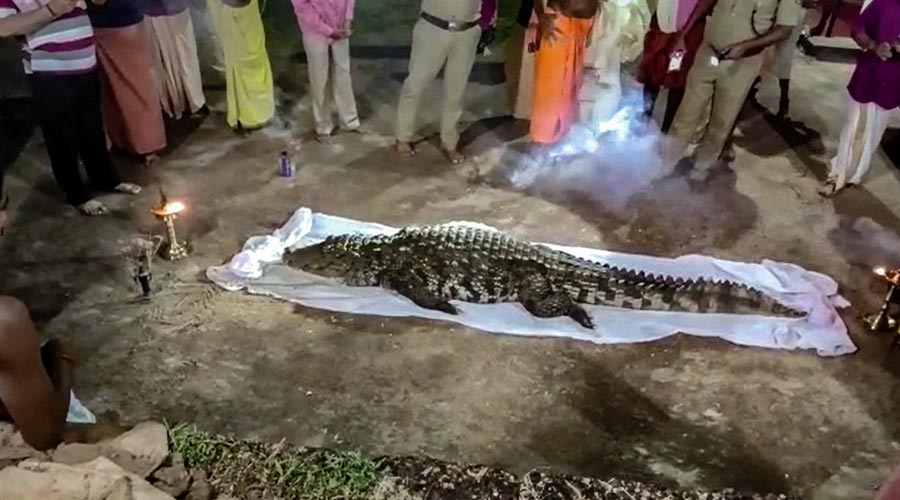 Carcass of the dead crocodile Babia, claimed to be vegetarian, that inhabited the lake at the Sri Ananthapadmanabha Swamy temple, being kept for public homage, in Kasaragod.
PTI Photo
PTI   |   Kasaragod   |   Published 10.10.22, 05:00 PM

A decades-old lone crocodile, claimed to be a vegetarian, that inhabited the lake at the Sri Ananthapadmanabha Swamy temple here and often found roaming inside its premises was found dead late on Sunday night.

Temple officials told PTI that the crocodile, fondly called Babia, was missing since Saturday. Thereafter, the carcass was found floating on the lake around 11.30 pm on Sunday night and the same was conveyed to the police and the animal husbandry department, temple officials said.

The carcass was removed from the lake and put on public display as hundreds of people, including politicians, turned up on Monday for a last glimpse of the crocodile.

Temple officials claimed the crocodile was a vegetarian which subsisted on the 'prasadam' made there.

Union Minister of State for Agriculture and Farmers' Welfare Shobha Karandlaje said she hoped that the "God's own crocodile", which lived at the temple for over 70 years, attains 'sadgati' or salvation.

"Babiya, the god's own crocodile of Sri Anantapura Lake temple has reached Vishnu Padam. The divine crocodile lived in the temple's lake for over 70 years by eating the rice & jaggery prasadam of Sri Ananthapadmanabha Swamy & guarded the temple. May she attain Sadgati, Om Shanti!," she tweeted.

BJP state president K Surendran also paid tribute to the crocodile in a Facebook post. "Babiya has left. For decades, was a constant presence at the Kumbla Ananthapuram Mahavishnu temple. Millions of devotees sought its darshan, considering it as the image of God. Pranamam," he said.

Temple officials said that the carcass of the crocodile would be buried before Monday noon in a pit nearby.

The Mahavishnu temple is located at Ananthapura near Kumbla in the northern Kerala district of Kasaragod. The temple is known as the 'moolasthanam', the original source, of the Sri Anantha Padmanabha Swamy temple of Thiruvananthapuram, according to its website.

The temple's website also claims that a "very unusual phenomenon" there was the presence of a single crocodile in the temple lake, named 'Babia'.

"By tradition, the lake is inhabited by a single crocodile and in the memory of the very aged men the present crocodile happens to be the third one they have seen. When one crocodile dies another one inevitably appears in the lake and this continues to be an unexplained phenomenon," the website stated.

"There is no river or pond nearby where crocodiles exist. The crocodile is friendly and harmless to human beings. Its presence in the lake around the Mahavishnu temple reminds one of the well-known Gajendra Moksha stories in the Bhagavatha Puranam," it further said.