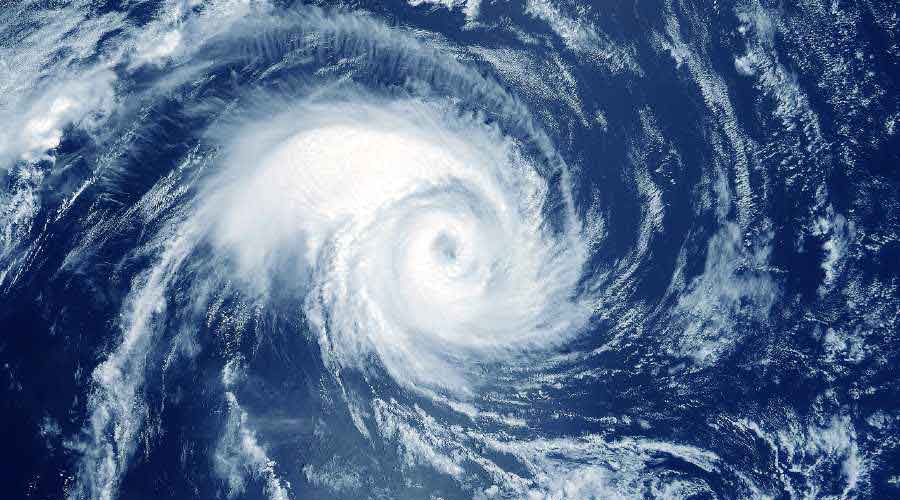 With the cyclone Asani approaching the Andhra coastline, rain emrged in parts of Andhra Pradesh's Kakinada district on Wednesday morning, according to ndtv.com.

The cyclone, which was moving at 5 kmph in the morning, gained speed to 25 kmph later in the day, as it lay centred around 210 km south-southeast of Kakinada in Andhra Pradesh and 530 km south-southwest of Gopalpur in Odisha, according to the latest bulletin issued at 4.30 PM.

The system is expected to recurve on Tuesday evening and move parallel to the coast in the north-northeast direction.

IMD Director General Mrutunjay Mohapatra said in Bhubaneswar that cyclone Asani has already achieved the maximum stage of intensification and is gradually getting weakened.

"After nearing the Andhra Pradesh coast in the evening, the system will change its course and move off and along the Odisha coast," he said.

Light to moderate rainfall took place in Puri and Khurda, while very heavy downpour is likely to occur in some places in north coastal Andhra Pradesh and coastal Odisha from Tuesday night.

He said the gale-force wind speed will decline to 80-90 kmph by Tuesday night and to 60-70 kmph by Wednesday evening.

Storm surge owing to the cyclonic storm is likely to inundate low-lying areas of Krishna, East and West Godavari and Visakhapatnam districts of Andhra Pradesh, the weatherman said in Kolkata.

The Met Department has warned fishermen against venturing into the deep sea till Thursday, as Odisha and West Bengal braced for heavy rain.

Rainfall was recorded in Ganjam, Puri and Khurda in Odisha and Kolkata in West Bengal on Tuesday morning.

The Met department said that light to moderate rainfall is likely over districts of Gangetic West Bengal till May 12.

Heavy rainfall is likely at one or two places over Purba Medinipur, Paschim Medinipur, North and South 24 Parganas and Nadia districts of the state till May 12 morning, it said.

As the system will come very close to land at a place between Kakinada and Vishakhapatnam in Andhra Pradesh, the Odisha government reorganised its preparedness by putting five districts - Malkangiri, Koraput, Rayagada, Ganjam and Gajapati - on high alert .

This apart, the coastal districts are also under alert for the eventuality, Special Relief Commissioner (SRC) P K Jena said.

As Odisha's Malkangiri district is about 200 km from Kakinada in AP, we have also mobilised rescue teams to the southern districts. They will be prepositioned well before the time of the cyclone passing near Odisha coast, he said.

The Ganjam district administration has closed all beaches including Gopalpur for visitors for two days.

Meanwhile, the East Coast Railway (ECoR) has put its officials on high alert in the wake of possible heavy rainfall triggered by the cyclone and asked them to ensure speedy restoration of railway traffic, a statement said.

All precautionary measures have been taken. Drains have been cleared of silt and vegetation to ensure free flow of rainwater and tree branches trimmed to prevent technical snags on overhead wires, it said.

The Odisha government announced that action under Disaster Management Act will be taken against fishermen venturing into deep seas by not heeding the IMD warning.

The decision was taken after five fishing boats capsized in the sea near Chatrapur in Ganjam district during the day but all 65 fishermen swam ashore.

The incident took place after a boat carrying five fishermen capsized, and it hit four other fishing boats carrying a total of 60 people following which all the vessels sunk, an official said.

The fresh happenings come a day after 11 fishermen from Odisha returning home after buying a new boat in Visakhapatnam were stranded in the sea when the vessel developed a snag. They were later rescued.

Cyclone Asani: How it matches up against its predecessors since May 2020