'Finance secretary Rajiv Kumar was eventually not chosen, probably because of stiff opposition' 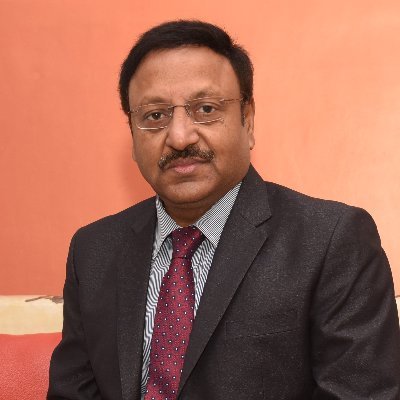 Finance secretary Rajiv Kumar (in picture) was also one of the 126 applicants who got shortlisted. The sources said the shortlist evoked strong dissent from the lone Opposition member who asked for cancellation of the selection process.
Twitter/@rajeevkumr
Sanjay K. Jha   |   New Delhi   |   Published 18.02.20, 08:48 PM

A member of the search committee for the chief vigilance commissioner (CVC) was also an applicant and he was shortlisted, sources have told The Telegraph.

The applicant was eventually not chosen, probably because of stiff opposition, the sources added.

Finance secretary Rajiv Kumar was also one of the 126 applicants who got shortlisted. The sources said the shortlist evoked strong dissent from the lone Opposition member who asked for cancellation of the selection process.

Sources said Rajiv Kumar, scheduled to retire this month-end, was not finally selected but the presence of a candidate in the selection panel was unacceptable. Sanjay Kothari, secretary to the President of India, is tipped to be the next CVC, although the formal announcement is yet to be made.

A Congress leader privy to the developments at the meeting attended by Lok Sabha leader Adhir Chowdhury told The Telegraph on Tuesday night: “The Prime Minister is under constitutional obligation to protect the integrity of governmental processes. What is being done is that the vigilance watchdog is being turned into a protective shield for the government. We saw the conduct of the CVC in Modi’s first term; the Prime Minister has demolished the institutional framework that is meant to fight corruption.”

This leader confirmed that Chowdhury registered his dissent, contending that the entire exercise had “glaring and fatal infirmities”.

Chowdhury stressed that the process was vitiated to begin with as a member of the search committee was allowed to be an applicant, giving this candidate exceptional advantage over the others.

The sources said the Opposition representative demanded the constitution of a new search committee that should invite fresh applications.

At a 90-minute meeting held under the chairmanship of the Prime Minister on Tuesday, Chowdhury is said to have referred to a Supreme Court judgment on the institutional integrity of the selection process and insisted that the government was violating that spirit.

In Modi’s first term, dissent by the then Congress Lok Sabha leader, Mallikarjun Kharge, and blunt rejection by the government had become the routine in every selection process, ranging from that of the CBI chief to the CVC.

The previous CVC, K.V. Chowdary, had found himself at the centre of countless controversies, and the Congress had repeatedly sought his removal. Chowdary was inducted into the board of directors of Reliance Industries soon after his retirement from the key post. The post of the CVC has been vacant for the past eight months.

Chowdhury contended that the absence of “material particulars” prevented him from applying his mind to the most suitable candidate. Sources said he told the meeting that the refusal to divulge details was a violation of Section 12 of the RTI Act.

The Congress feels that the government wanted to invite the Opposition representative only to complete the legal formality and obtain his approval on the choice of the Prime Minister or the home minister. “We don’t want to be reduced to a stamping tool,” a Congress leader said.