CPM women’s wing Janwadi Mahila Samiti released a survey of almost 2,000 workers, which paints a grim picture of the poor facing the brunt of the pandemic 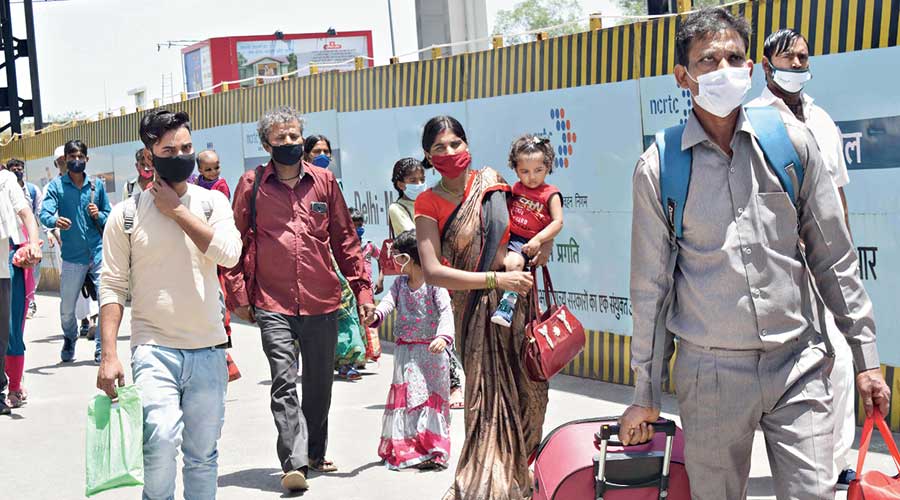 A survey of almost 2,000 workers by the CPM in Delhi and neighbouring Ghaziabad in Uttar Pradesh has found that two-thirds of them lost their jobs in April and May this year, and a fifth spent close to Rs 12,000 on Covid-19 treatment.

Less than a third of the workers received their full entitlement from the public distribution system and the additional pandemic-time rations promised by the government, the report titled “Results of the Survey on the Impact of Covid-19 Second Wave in Delhi-NCR Region” says.

CPM women’s wing Janwadi Mahila Samiti on Friday released the report, which paints a grim picture of the poor facing the brunt of the pandemic this year too.

The survey found that the proportion of the completely unemployed among the respondents increased from the pre-April 4.6 per cent to 66.5 per cent in April and to 71.9 per cent in May. Casual workers were the worst hit, with 72 per cent of them unemployed in April and May.

“While most casual workers became unemployed, those who were self-employed were unable to work for many days, and therefore saw their incomes falling drastically,” the report says.

According to the report, around 18 per cent of the respondents said that either they or their family members had suffered Covid infections or showed Covid-like symptoms in April and May, for which the average cost of treatment was Rs 11,921.

Some 78.5 per cent of the respondents said they were not vaccinated at all.

Delhi prides itself in having a better public health system than most parts of India, and the ruling Aam Aadmi Party government claims that government facilities did not run out of beds despite a rush of cases the like of which few cities had seen.

The households of 54.3 per cent of the respondents did not have ration cards that were usable in Delhi. “This was the biggest cause of their exclusion from the PDS,” the report says.

The report adds: “Thirdly, distribution of the extra entitlement of 5kg per person, which was announced by the government, started only in May. Even in May, only 31 per cent of the households with ration cards received a full 10kg per capita grain. On the other hand, despite the additional entitlement announced by the government, 27 per cent households got less than 5kg per person even in May 2021.”

Earlier this month, the Delhi government agreed to implement the Centre’s One Nation One Ration Card scheme, which allows the beneficiaries to receive subsidised rations anywhere in India irrespective of which state they are registered in.

“These findings underscore the urgent need to provide cash assistance to working class households, the need to urgently expand (the) Covid vaccination programme, to strengthen the public health system, and to provide universal entitlement to subsidised food and employment guarantee through an expansion of the social protection programmes,” the report says.