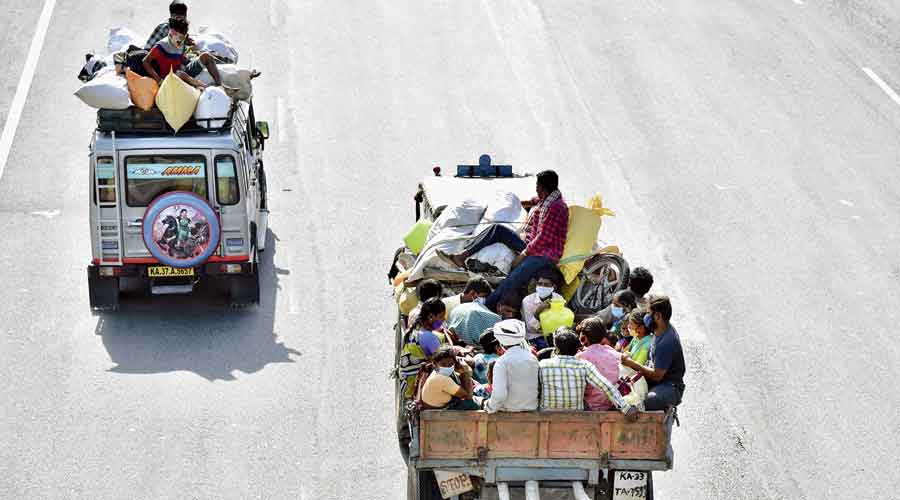 The unemployment rate in the country has more than doubled in the March-May period this year as the pandemic’s second wave flattened the country, data released by a private research group show.

According to weekly unemployment figures released by the Centre for Monitoring Indian Economy (CMIE), a leading business information think tank, the rural populace has also born the brunt of the pandemic and the resultant restrictions this time.

During the first wave last year, the urban workforce had been primarily affected.

Also, women have been more adversely hit by the latest Covid surge.

The CMIE data show that the unemployment rate in the week ending May 16 was 14.45 per cent of the total workforce, more than double the figure recorded on March 14 — 6.63 per cent. The situation is equally bleak in rural areas and urban areas.

The CMIE categorised as unemployed those people who sought jobs but received less than 1 hour of work in a week.

Another pointer to the grim situation could be found in data released by the ministry of rural development, which showed a massive spike in work provided under the 100-day job scheme, the Mahatma Gandhi National Rural Employment Guarantee Act. The wage provided under the MGNREGA is meagre and payments are often delayed, as a result of which it is the lowest on the preference list of workers.

According to the ministry data, nearly 1.85 crore people have been offered work in May under the MGNREGA, which is 52 per cent higher than that given during the same period in 2019 when there was no Covid.

Moreover, labourers are paid 15 days after they finish work under the MGNREGA, and even then payments are often delayed.

Labour economist Amit Basole, a faculty member at Azim Premji University, said the pandemic had whittled down the Worker-Population Ratio (WPR), which refers to the number of working age people employed from among the population.

“The WPR indicates women are being hit harder than men,” Basole said.

He said pseudo-employment, or work that does not generate any income, had increased among self-employed people. Many of these people have been opening their business units, workshops or production centres, but hardly receiving any customers because of the pandemic and the local lockdowns.

“Because the demand for goods and services has come down as people have limited their consumption to essential items, a section of self-employed people trading in non-essential goods has very low or no earnings. In a way, they are also unemployed though all surveys will label them as employed,” Basole said.

The lifting of restrictions in the states as the pandemic eases will facilitate a slow revival of the economy and the job sector.

“Since it is going to be a stressed period ahead, the minimum that is required from the government is an increase in the permissible days and types of work under the MGNREGA, direct benefit transfer of funds and continuation of food security measures,” Basole said.

Labour economist K.R. Shyam Sundar, a professor of human resource management at XLRI, Xavier School of Management, Jamshedpur, attributed the increase in the unemployment rate to a reduction in economic activities because of the increasing micro, temporal and state-wide lockdowns.

“The state-wide lockdowns aggregate to a quasi-national lockdown with minimal trade and industrial activities and shrinking economic activities. Both product demand and labour demand have been significantly affected. This is reflected in the gradual but sure surge in the daily rate of unemployment,” Sundar said.

He said the CMIE data suggested that the second wave of the pandemic had also mauled economic activities in the rural areas, unlike during the first wave when the urban centres had mainly born the brunt.