States controlled by the BJP may face pressure to underreport, according to some analysts 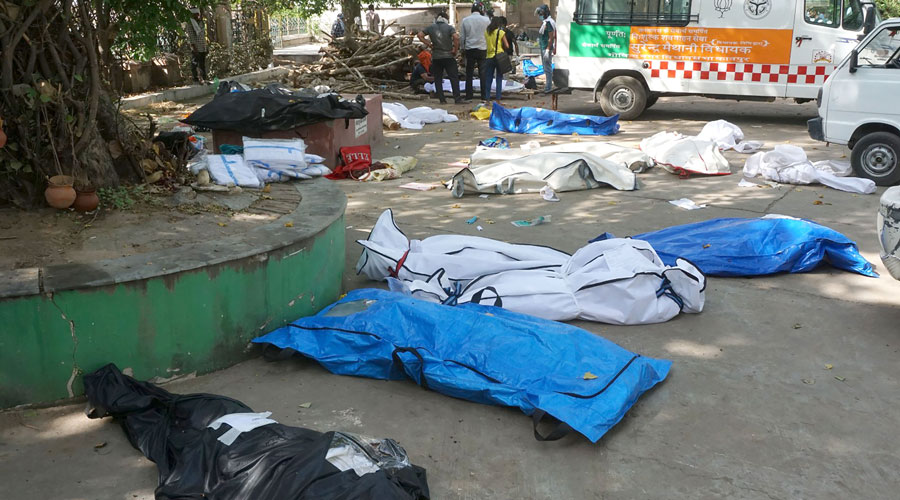 Evidence is mounting that the actual death toll from the second wave of the coronavirus in India is far higher than officially reported.

Each day, the government reports more than 300,000 new infections, a world record, and India is now seeing more new infections than any other country by far, almost half of all new cases in a global surge.

But experts say those numbers, however staggering, represent just a fraction of the real reach of the virus’s spread, which has thrown the country into emergency mode.

The sudden surge in recent weeks, with an insidious newer variant possibly playing a role, is casting increasing doubt on India’s official Covid-19 death toll of nearly 200,000, with more than 2,000 people dying every day.

Interviews from cremation grounds across the country, where the fires never stop, portray an extensive pattern of deaths far exceeding the official figures. Nervous politicians and hospital administrators may be undercounting or overlooking large numbers of dead, analysts say. And grieving families may be hiding Covid connections as well, adding to the confusion.

“It’s a complete massacre of data,” said Bhramar Mukherjee, an epidemiologist at the University of Michigan who has been following India closely. “From all the modelling we’ve done, we believe the true number of deaths is two to five times what is being reported.”

At one of the large cremation grounds in Ahmedabad, bright orange fires light up the night sky, burning 24 hours a day, like an industrial plant that never shuts down. Suresh Bhai, a worker there, said he had never seen such a never-ending assembly line of death.

But he has not been writing down the cause of death as Covid-19 on the thin paper slips that he hands over to the mournful families, even though the number of dead is surging along with the virus.

Asked why, he said it was what he had been instructed to do by his bosses, who did not respond to requests for comment.

On Saturday, officials reported nearly 350,000 new infections, and the deaths continued to rise.

In Bhopal, residents say the cremation grounds haven’t been as busy since the gas disaster in 1984.

Over 13 days in mid-April, Bhopal officials reported 41 deaths related to Covid-19. But a survey by The New York Times of the city’s main Covid-19 cremation and burial grounds, where bodies were being handled under strict protocols, revealed a total of more than 1,000 deaths during the same period.

“Many deaths are not getting recorded and they are increasing every day,” said G.C. Gautam, a cardiologist based in Bhopal. He said that officials were doing this because “they don’t want to create panic”.

The same phenomenon appeared to be happening in Lucknow and Mirzapur in Uttar Pradesh and across Gujarat where, during a similar period in mid-April, the authorities reported between 73 and 121 Covid-related deaths each day.

But a detailed count compiled by one of Gujarat’s leading newspapers, Sandesh, which sent reporters to cremation and burial grounds across the state, indicated that the number was several times higher, around 610 each day.

India’s population is, on average, much younger than in most western nations. Experts say that is the most likely reason that deaths per million in India had seemed relatively low. But the number is quickly climbing.

According to excess mortality studies, Covid-19 deaths have been underestimated in many countries, including the US and Britain.

But India is a much bigger and poorer country. And its people are spread across 29 states and several federal territories in a highly decentralised system of governance, with different states counting deaths in different ways.

Even in a good year, experts say, only about one-fifth of deaths are medically investigated, meaning that the vast number of Indians die without a cause of death being certified.

According to the World Health Organisation, a death should be recorded as Covid-related if the disease is assumed to have caused or contributed to it, even if the person had a pre-existing medical condition, such as cancer.

In many places in India, that doesn’t seem to be happening.

Rupal Thakkar tested positive for Covid-19 in mid-April. On April 16, she was admitted to Shalby Limited, a private hospital in her home city of Ahmedabad, but her oxygen levels suddenly dropped. The next day Thakkar, 48, died.

The hospital listed her cause of death as “sudden cardiac death”, which left the Thakkar family outraged.

“It was a lifetime shock,” said her younger brother, Dipan Thakkar. “Why would a private hospital connive with the government in hiding the real death numbers? It was an organised crime. It was an illegal act.”

Officials at Shalby didn’t respond to requests for comment.

After her situation was widely publicised in newspapers, the hospital issued a second death certificate, this time including Covid-19 as a contributing cause.

Some families don’t want the truth to come out, said Mukherjee of the University of Michigan. Some want to cremate loved ones outside strict Covid-19 government protocols, and so they hide the fact that their family member died from the coronavirus. Others may feel ashamed about losing a loved one, as if it were their fault.

A political agenda may also be at play, experts said. States controlled by the BJP may face pressure to underreport, according to some analysts. Mukherjee cited the very public scandal in 2019 when Prime Minister Narendra Modi’s government tried to suppress data showing a rise in the unemployment rate.

When it comes to Covid data, she said, “there is tremendous pressure from the central government on the state governments for projecting progress”.

Several officials from the governing party failed to respond to messages seeking comment.

But manipulating death numbers seems to be happening in other places, too. One example is the state of Chhattisgarh, in central India, which is run by the Congress.

Officials in Chhattisgarh’s Durg district, home to a large steel plant, reported more than 150 Covid-19 deaths from April 15 to April 21, according to messages sent to local media that were seen by The Times. The state reported less than half that number for Durg.

Chhattisgarh’s health minister, T.S. Singh Deo, denied any intentional underreporting. “We have tried to be as transparent as humanly possible,” he said. “We stand to be corrected at any point in time.”

Those working at the burning grounds said they were utterly exhausted and could never remember so many people dying in such a short span of time.

On April 14, Covid-19 crematories in Gujarat’s Surat and Gandhi Nagar told The Times that they had cremated 124 people, on a day when the authorities said 73 had died of Covid-19 in the entire state.

In Kanpur in Uttar Pradesh, bodies are now being burned in some of the city’s parks, the crematories are that backed up.

In Ahmedabad, at the Vadaj crematory, huge smokestacks pump out black smoke. Suresh, the clerk, sits in a tiny office, the door closed firmly shut.

Suresh said his crematory handled 15 to 20 bodies of Covid-19 patients every day. As he spoke on Friday, three bodies burned on separate pyres, next to a large and growing stack of freshly chopped wood.