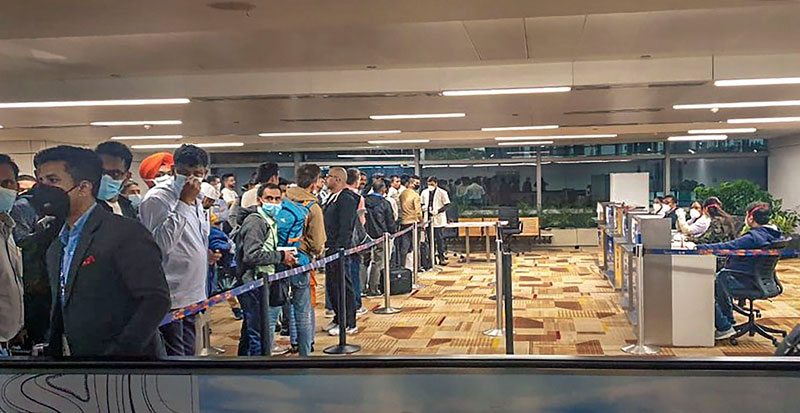 Arrangements for segregation of international passengers arriving from 15 identified countries at Delhi Airport in the wake of COVID19
PTI
PTI   |     |   Published 12.03.20, 11:28 AM

Indian Customs has barred passengers arriving from 15 nations, including China, the US, Italy and South Korea, from entering the duty-free shopping area at the Delhi airport in the wake of the coronavirus pandemic.

With the government already cancelling visas with effect from March 13, this would mean that even Indian nationals returning home from these 15 countries will not be allowed to enter the Delhi duty-free shopping area.

The Commissioner of Customs at the Indira Gandhi International Airport, Delhi, notified that the ban has been put in place “in view of the threat from COVID-19 virus”.

Passengers arriving on flights from China, the US, Italy, South Korea, Iran, Japan, Malaysia, Hong Kong, Singapore, Indonesia, Spain, France, Vietnam, Nepal and Thailand will not be able to enter the duty-free shopping area due to operational limitations till further orders, the notice said.

External affairs minister S Jaishankar said on Thursday that the coronavirus outbreak is a matter of “great concern” and the government's initial focus is to bring back Indian pilgrims stranded in Iran.

Speaking on the situation arising out of the spread of the coronavirus, he said around 6,000 Indians are stranded in Iran, including 1,100 pilgrims from Maharashtra and Jammu and Kashmir. There are also around 300 students there, he added.

The “initial focus is on bringing back pilgrims, mostly stranded in Qom”, he said, adding that 58 citizens from Iran have been brought back, and the government was working with Iranian authorities to operate some limited commercial flights for facilitating an early return of the remaining Indians after testing them.

The minister also informed that there are 1,000 Indian fishermen who are stranded in Iran, but they are in a region that is not affected by the virus.

He said a team of health professionals has been sent to Iran to set up testing facilities there for Indians.

Talking about Italy, Jaishankar said the situation in the European country is a matter of great concern. Those tested negative will be allowed to return.

The minister said that about 90 countries have reported coronavirus cases and the government has to focus and prioritise.

Detailing steps being taken by the government to bring back Indians from COVID-19 affected nations, Jaishankar also apprised the House that India has stretched its resources in dealing with the situation post the coronavirus’ spread.

“The House will surely appreciate that few other nations have done what we have with respect to the COVID -19,” he said.

The global coronavirus situation is being monitored on a continuous basis by a Group of Secretaries headed by the Cabinet Secretary and a Group of Ministers, chaired by minister of health and family welfare,” Jaishankar said.

Besides taking steps to check the spread of the virus in the country, the government has ensured that e-visas and visa on arrival are temporarily suspended in certain cases. Precautionary measures are also being taken on all land borders as well as air and sea entry points.

The World Health Organization (WHO) on Wednesday declared the novel coronavirus (COVID-19) a pandemic.

Globally there have been over 4,200 deaths in 114 countries due to COVID-19. The number of infected people in India is 73, as per health ministry data.

The government on Wednesday suspended all existing visas, except diplomatic, official, UN/international organisations, employment, and project visas until April 15. Also, visa-free travel facility for Overseas Citizen of India (OCI) holders has been suspended from March 13 to April 15.