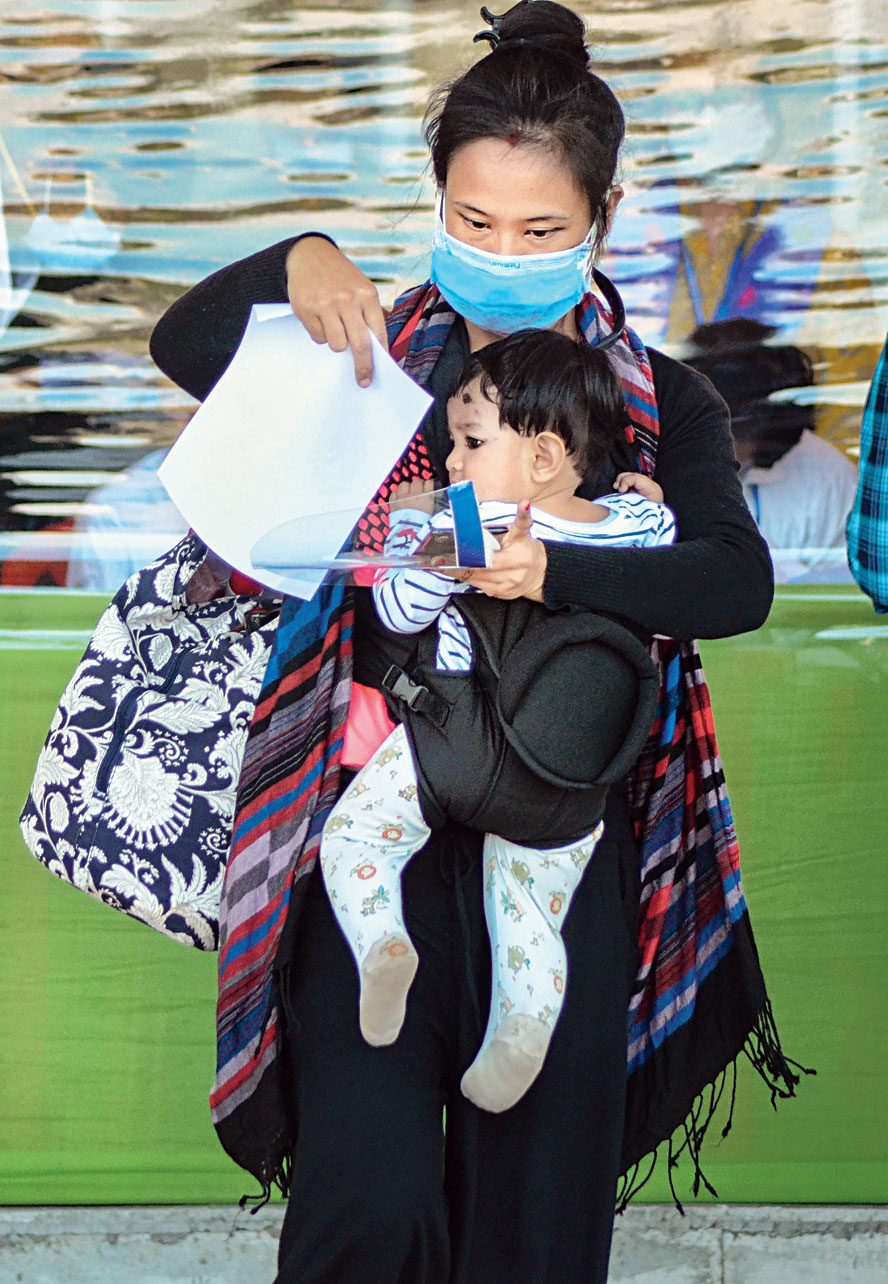 A passenger balances her child and documents after arriving at Mohanbari airport in Dibrugarh on Thursday from Calcutta.
(PTI)
Mohsin Khaiyam   |   Guwahati   |   Published 28.05.20, 09:16 PM

A second air passenger has tested positive in Assam amid rising concern over the spiralling Covid count, which spiked to 856 on Thursday evening.

The air traveller was among the 73 new cases detected on Thursday, taking the overall tally to 856 and active cases to 762. Health minister Himanta Biswa Sarma said the cases might rise to 1,000 by May 31.

He said all efforts were being channelled, with the support of the community, to prevent the third phase of transmission. He stressed on “ruthless quarantine with a humane touch”, social distancing and frequent hand-washing.

Junior health minister Pijush Hazarika was confident that “community transmission has not taken place” because “maximum cases have been reported from quarantine centres”.

The second passenger had come on the same Ahmedabad-Delhi-Guwahati SpiceJet flight as the first air carrier. The flight had landed at the LGBI Airport on Monday, the day air travel resumed in the country after relaxation in Covid-19 lockdown norms.

Both the lady passengers had travelled on the SG-8194 (Ahmedabad-Delhi) and SG-8152 (Delhi-Guwahati) flights. Both are from Guwahati and currently in quarantine at the MMCH here. The crew of both flights have been quarantined. Several contacts of the two air travellers, including eight primary contacts, have been traced and quarantined.

Chief minister Sarbananda Sonowal, while flagging off a cargo flight carrying pumpkins produced by the state’s farmers to Dubai at the Cargo Terminal of LGBI Airport, also took stock of the arrangements for registration and screening of in-bound and out-bound passengers at the airport. He said the government was taking steps to bring back the state’s residents stranded in other parts of the country through different modes of travel. Altogether 3,421 people have arrived in Assam by 38 flights so far, while 1,190 people have flown out.

On May 17, it reported its 100th case and by May 28 it recorded over 700 cases. The rise is primarily because of cases found among the stranded returning home by rail, road and air.

Governor Jagdish Mukhi also took stock of the Covid situation in Udalguri and asked the district administration to adhere to the advisories of the health and family welfare department.

Leader of the Opposition in the Assembly Debabrata Saikia on Thursday wrote to Union finance minister Nirmala Sitharaman regarding non-release of financial relief to zero-balance account holders who had opened accounts prior to formation of the BJP-led government at the Centre in 2014. “After the BJP-led alliance came to power, the name of the scheme was changed to Pradhan Mantri Jan Dhan Yojana. During the lockdown, the government announced that Rs 500 would be deposited every month in all zero-balance Jan Dhan Yojana bank accounts held by women. However, I have come to know that many people who had opened such accounts between 2010 and 2014, that is before the BJP-led government came to power at the Centre, are being denied grant of financial relief,” he said, alleging that the discrimination was “unjust and politically motivated”.

Saikia requested Sitharaman to take immediate steps to ensure that all zero-balance account holders were treated equally and that none was deprived of the much-needed government assistance.

Additional reporting by our special correspondent and Rokibuz Zaman