Taking suo-motu cognizance of a media report in this regard, it asked the Director General of Police to ensure that the guilty are put behind bars 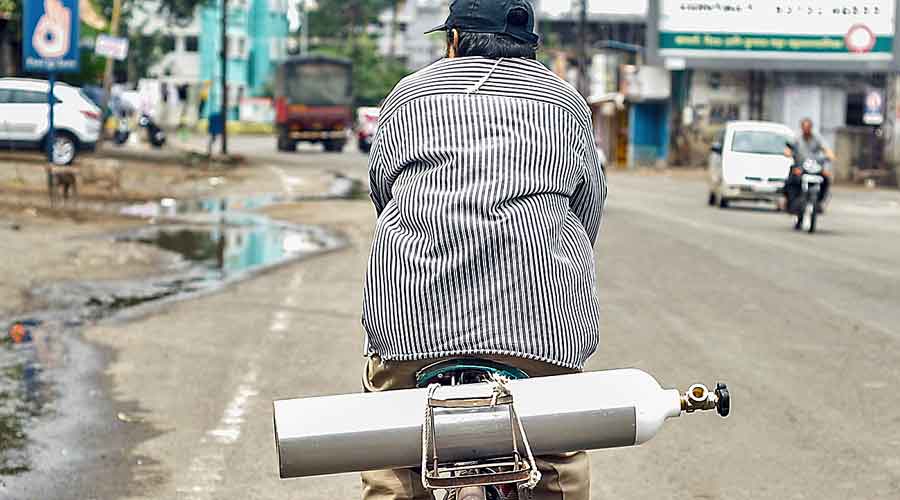 Taking suo-motu cognizance of a media report in this regard on Wednesday, it asked the Director General of Police to ensure that people involved in such activities are put behind the bars and directed the government to abide by the advisory issued by National Human Rights Commission on the issue of burial. It also advised the state government to save people from exploitation by unscrupulous elements.

The flow metre attached to an oxygen cylinder whose cost was Rs 1450 only two months ago, is now being sold at Rs 3,500. Similarly, the small size B-type 10 litres oxygen cylinder which was sold at between Rs 8,000 and Rs 9000 four months ago, is now being sold at anywhere between Rs 35,000 and Rs 40,000. But most of the time, these are not available in the open market.

Similarly, oxygen concentrators are out of bounds for the common man.

One of the businessmen in Bapuji Nagar dealing in the products told The Telegraph, “We are depending on supplies from Mumbai. As the people have increased the price of these products, we have no option but to charge the public.”

“We will comply with all the issues raised by the OHRC. The OHRC also appreciated the state’s move on framing a unitary chart for the ambulance on fixing of rates,” the government officials said.

The number of Covid deaths in Odisha reached 2,378 with the death of another 21 persons in the last 24 hours. Former Odisha cricket team captain and match referee Prasanta Mohapatra, son of eminent sculptor Raghunath Mohapatra, succumbed to Covid on Wednesday.

Sculptor Raghunath had passed away on May 9. Prasanta had played 45 first class matches and 17 domestic one-dayers. He officiated in over 40 domestic matches.

“Mr Prasanta Mohapatra (Ex-Ranji Trophy Cricket and BCCI Match Referee) breathed his last today early morning at Bhubaneswar. On his sad and untimely demise the OCA expresses its deepest condolence. Our thoughts and prayers are with the bereaved family,” Odisha Cricket Association tweeted on Wednesday.