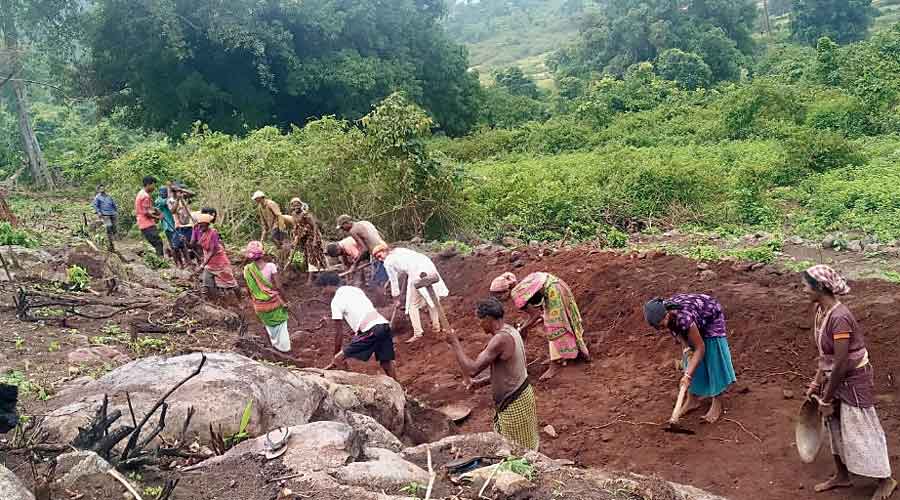 The villagers of B Ranipanga in Kandhamal, Odisha, digging the canal on June 21
Sourced by the correspondent
Subhashish Mohanty   |   Bhubaneswar   |   Published 13.07.20, 03:07 AM

Jobless does not necessarily mean workless, a group of about 30 migrant Odia labourers who returned home from Kerala and Chennai because of the lockdown have shown.

With spades and hoes, they and fellow villagers have dug a 1km canal to their hilly hamlet in the tribal district of Kandhamal to irrigate their fields -– a feat being hailed by district authorities and social activists.

The three-to-four-foot-deep canal, carrying water from a local stream, is expected to eventually help irrigate nearly 150 acres of farmland in B. Ranipanga village, about 310km from Bhubaneswar.

The first phase — bringing water to the village — was completed on July 6 after 25 days’ toil. Now the smaller channels that will carry the water to every individual field are being dug.

“There was no work for us in the village on our return, and we had spent all our money during the lockdown,” said Prashant Pradhan, 30, who had returned home from Kerala in May on a special train. “So we thought we should do something instead of sitting idle. We spoke to fellow villagers and decided to work in the fields.”

But there was a problem: the village lacked a reliable source of irrigation and depended on seasonal rain and a well.

“A stream flows about a kilometre from the village. It’s a perennial stream and has never gone dry even in summer. We decided to dig a canal from the stream to our fields,” said Sebata Pradan, another migrant labourer. “We held a meeting of villagers. Many, including women and children, volunteered to lend a shoulder.”

Some 85 villagers, including the returned migrants, began the work.

About 40 people from neighbouring villages too arrived to help, armed with shovels, hoes, crowbars and baskets and spurred by hope that the canal would be extended to their fields in future, said Siptan Pradhan, 34, another returned migrant.

“We would gather early in the morning every day and work till evening, with a break for lunch and a few hours’ rest in the afternoon. After 25 days’ toil, the canal was ready,” Siptan said.

Dinabandhu Maharana, secretary of the NGO Kandhamal Zilla Sabuju Baidya Sangathan, which provided free rations to those working on the project to keep them motivated, said the achievement was particularly praiseworthy as the villagers lacked even the basic knowledge of civil engineering.

“They had no explosives to smash the huge stones that came in the way of digging in this hilly terrain. Some of these were around six metres high and four metres wide,” Maharana said.

“Using their traditional knowledge, the villagers would light a fire around the big boulders, which would heat up for the entire night and then cool in the morning because of the dew.”

The stress caused in the rocks by the alternate expansion and contraction made it easy for the villagers to break them with shovels and sledgehammers, Maharana said.

He said that apart from providing the diggers with rice, dal and other foodstuff, the NGO had also distributed vegetable seeds among them.

“Since the vegetables grown by them would be organic, the demand for the produce would be high. We will provide them with the necessary market links,” he said.

Maharana said the return of the migrant labourers had been “a boon” for the village since without their leadership and knowledge — gained thanks to their exposure to the outside world — the project would probably not have got off the ground.

One piece of good news is that the villagers would soon start getting paid for the further work they do on the canal. The district authorities, facing the pressure of public opinion since news spread about the villagers’ feat, have decided to engage them in strengthening the canal.

Kotgoda block development officer Krushna Chandra Murmu told The Telegraph that the administration would bring the project under the rural job guarantee scheme.

“We have provided job cards to the villagers (migrant workers). We want them to turn the canal into a concrete, permanent structure,” he said.

As part of the MGNREGA project, the canal is expected to be extended to the neighbouring villages.