Reminder to Supreme Court of duty to protect rights of all

No consideration of the poor while passing orders during lockdown: Campaign for Judicial Accountability and Reforms 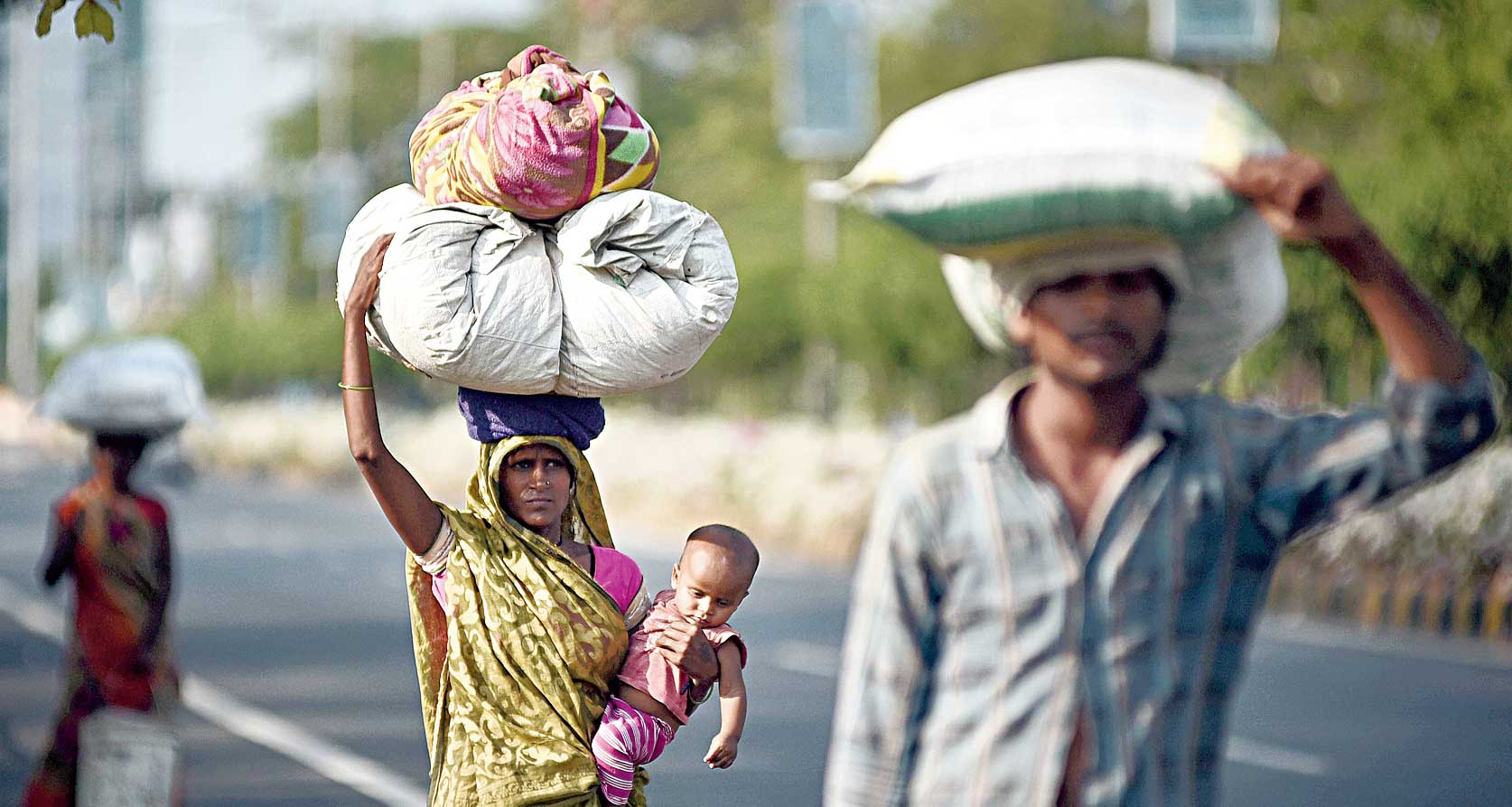 A migrant woman carrying her child walks along a road with her family in Vijaywada, Andhra Pradesh, on Wednesday to reach their native place in Maharashtra.
(PTI)
Our Legal Correspondent   |   New Delhi   |   Published 13.05.20, 11:06 PM

An advocacy group for judicial accountability has expressed concern over the Supreme Court’s response to the sufferings of India’s Covid-19-hit poor, in a scathing criticism that also accused it of accepting without “demur” the government’s claims about tackling the pandemic.

The non-government Campaign for Judicial Accountability and Reforms said the court’s “passivity” was difficult to comprehend.

The CJAR’s criticism came in a statement that the group, which includes legal luminaries such as former Supreme Court judge P.B. Sawant, released on Wednesday.

“Though the Court has taken measures to limit functioning considering Covid-19, we believe that the Court has sacrificed core principles of fairness and transparency in justice delivery while doing so,” the CJAR said, while holding up as a template the recent retirement speech Justice Deepak Gupta had given.

“In times of a crisis such as the ones we are living in, the courts must protect the poor and the underprivileged, because it is they who are hit the hardest in trying times,” Justice Gupta, who had retired from the Supreme Court last week, had said.

Unfortunately, the court has taken no consideration of the poor in passing orders during this period of lockdown, the CJAR said.

On several public interest pleas, it said, the court had accepted without “demur” whatever the Centre had said on affidavit, whether on the rights of stranded migrant workers, curbs on 4G Internet in Kashmir or in important habeas corpus cases.

“(W)e believe that the Court’s passivity in the face of dire need is difficult to comprehend. As a constitutional institution, the Supreme Court has a duty to protect the fundamental rights of all even in exceptional circumstances and its response so far has left much to be desired,” it said.

“We therefore call upon the Court to seek and satisfy itself of the adequacy of the measures being undertaken by the Union and State Governments and where appropriate, pass necessary orders without fear or favour, without simply accepting their statements at face value.”

The NGO said it was concerned about the way cases were being listed. While the need for physical distancing called for restricting work to urgent matters, certain cases, it said, were being heard at great urgency and other similar matters kept pending.

“…we find that cases concerning rich and powerful persons are getting listed out of turn. The impression created is that the process has been left to the utter discretion of the Registry staff and not guided on rules or principles of fairness and equality before law,” the CJAR said.

It said matters of civil liberty and equally urgent cases must be heard as early as possible and suggested the court consult the Supreme Court Bar Association (SCBA), the Supreme Court Advocates on Records Association and other stakeholders to ensure bias-free listing of cases… “to restore the faith of the public in the processes and the procedure of the court”.

The CJAR appreciated the court’s efforts to continue hearings through video link but expressed concern that this has led to the negation of the principle of openness and the need for public hearings.

It said the use of “proprietary technologies which only connect lawyers (and litigants in some high courts) to judges and Court staff has meant that this vital principle has been compromised upon”.

“We therefore call upon the Court to live stream all e-hearings to the public at large, in accordance with its own judgment in (the) Swapnil Tripathi v Supreme Court of India (2018) (case) where it had agreed to live stream proceedings in important cases,” the CJAR said.