More than 82 million who applied for jobs under the MGNREGA since April have secured work, but the scheme still falls far short in a country with an estimated 100 million migrant workers 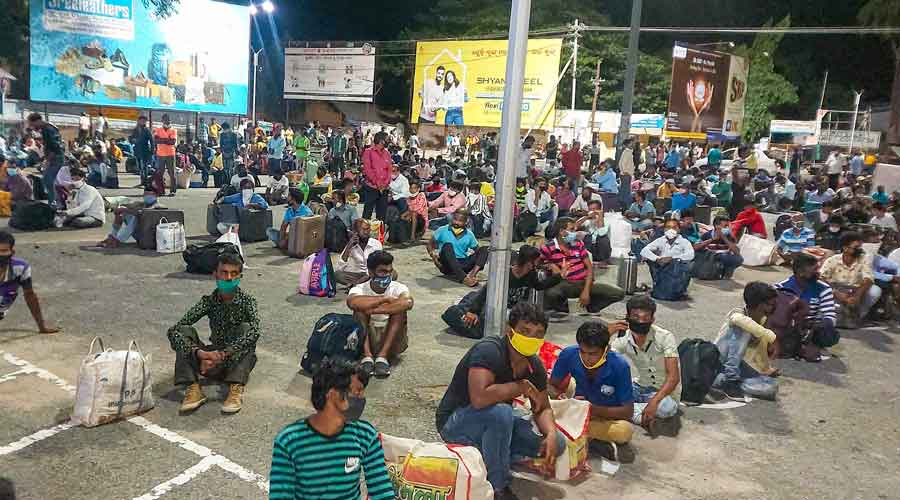 Omkar Rathod was thankful for the company of hundreds of fellow migrant workers as they trudged home to far-flung villages once the lockdown had shut Indian industry.

But he didn’t realise he would soon be competing with them for jobs.

Back in his village in northern India since March, Rathod is vying for work under the world’s largest job programme: the only option for the millions of migrant workers who face mass job losses in a struggling economy and a raging pandemic.

“If there were 15 people for a job earlier, now there are 200. Work for eight days is getting done in one day,” Rathod, 45, said from Nawabganj in Uttar Pradesh.

Rathod said over the phone: “This scheme is our only hope for work in our village. I got 15 days of work under the job scheme in May but nothing after that.”

More than 82 million of the 98 million people who applied for jobs under the Mahatma Gandhi National Rural Employment Guarantee Act (MGNREGA) since April have secured work, a record that tops the number of new jobs created under the programme each year in India.

But the scheme still falls far short of what is needed in a country with an estimated 100 million migrant workers.

Analysts say the fund -- which has already been topped up -- is once more close to being spent.

“This meets the demand up to September. But it is not enough. States should be asked to redraw labour budgets and be assured that adequate funding will be provided,” said Ravi Srivastava, director of the Centre for Employment Studies at the Institute for Human Development, a research organisation.

The rural development ministry did not respond to repeated requests for comment, but officials of five states that recorded among the highest number of applicants said they had provided work to almost every job seeker.

The scheme was created to provide steady wages and jobs for people, who were in turn creating assets for their villages, be it conserving water or improving roads.

It was never envisioned as a bandage in a global pandemic.

Vallabhacharya Pandey, a social activist who works with migrant workers in Uttar Pradesh, said the scheme had worked well in the initial weeks of the pandemic, when the only people seeking work were locals. “But the return of migrant workers has overburdened the programme,” he said.

India’s estimated 100 million migrant workers were among the worst hit by the strict lockdown, which triggered a mass exodus from city jobs at garment factories, building sites and brick kilns.

Migrant labourers took to the roads en masse and walked back to the countless villages that dot the map and offer few opportunities to earn.

After months back home, they said some employers were now sending buses or buying air tickets to get workers back, but many were still sitting idle in their rural outposts awaiting any word on work.

India’s economy shrank by almost 24 per cent in the second quarter, the worst of all major economies, even as the number of Indians with the virus topped 4.2 million, exceeded only by the US tally of 6.2 million.

“The pandemic has come at a time sectors of construction and manufacturing were already ailing. So even if they want to migrate to cities again, where do they go?” asked Raghunath Singh, vice-president of the All India Centre of Indian Trade Unions.

Besides, jobs in cities have lost their sheen for many as nearly half of urban workers went without work, pay or financial assistance in the first three months of the lockdown, studies show, with many reluctant to return.

Launched more than 15 years ago to offer a secure livelihood to rural India, the scheme guarantees applicants at least 100 days of work for average daily wages of Rs 200. It has been credited with saving families from poverty, and empowering women and the socially marginalised.

Around 800,000 households have completed 100 work days this financial year, according to official data.

But those figures do not begin to tell the whole story, according to a group of activists, academics and researchers tracking the scheme.

“Unmet demand is wider than it appears in the data as even a single day of work gets recorded as job provided,” said M.S. Raunaq, secretary of the collective, called People’s Action of Employment Guarantee (PAEG).

Local officials said that “satiating the demand” was a challenge and attributed the shortfall to delays in feeding data, and jobs offered at a time workers were not available.

Officials overseeing the programme in five states contacted by the Thomson Reuters Foundation said they were creating jobs that could absorb more workers despite a backdrop of strikes, floods and tight budgets.

The jobs include planting trees, building roads and cleaning canals -- useful yet rarely tasks that tap into an applicant’s trade.

“Migrant workers are mostly skilled and earned Rs 500 a day, so Rs 220 won’t keep them in rural areas,” said P.C. Kishan, the scheme’s commissioner in Rajasthan, referring to the overarching aim of the programme to slow emergency (distress) migration from India’s web of villages.

Omkar Rathod, for one, wants to go back to the town where, pre-virus, he earned Rs 7,000 a month at a car factory.

He even got himself tested for the coronavirus, hoping a certificate would help as the pandemic surges in rural India.

But the job contractor told him there was no work yet — so he has no choice but to feed the family cows, stay put and nurse his worries. “Half a year is gone already and there is no work, neither outside nor in the village. What will we do?