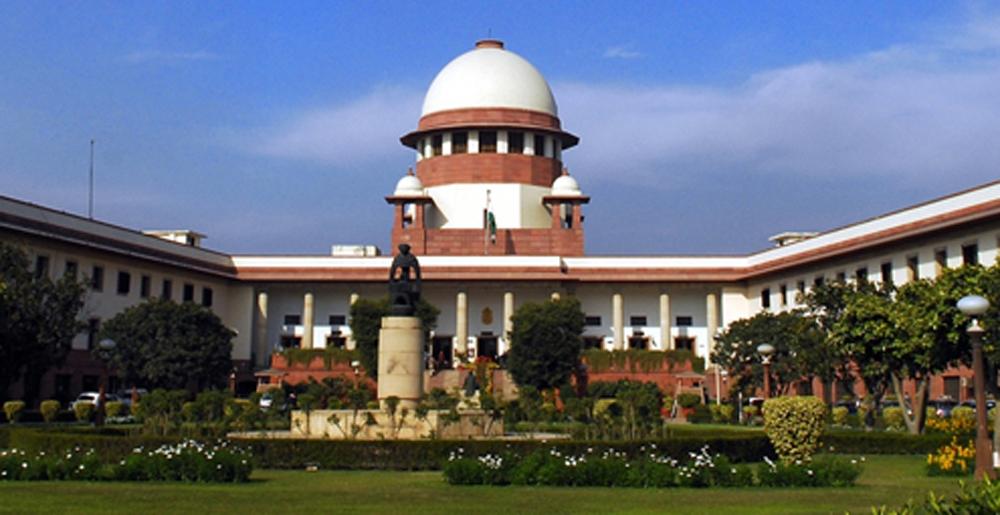 Reports that the Indian Railways has been charging Rs 800 per passenger had led to an acrimonious debate, with the Congress-led Opposition accusing the BJP-led government of fleecing the migrants at a time when the Covid-19 lockdown had left them without jobs and money.
(Source: sci.gov.in)
Our Legal Correspondent   |   New Delhi   |   Published 05.05.20, 09:00 PM

The central government on Tuesday declined to give the Supreme Court a break-up of the share of ticket fares the Centre and states would bear for migrants travelling home by train and also “what amount” was “being taken” from the workers now.

Solicitor-general Tushar Mehta’s admission that he had “no instructions” to reveal the details came as the court heard a public interest plea.

Social activist Jagdeep S. Chhokar, who had approached the court with the PIL, had sought immediate steps to help the thousands of migrants across the country return home.

Chhokar also said the migrants should not be charged any fare by the government.

Reports that the Indian Railways has been charging Rs 800 per passenger had led to an acrimonious debate, with the Congress-led Opposition accusing the BJP-led government of fleecing the migrants at a time when the Covid-19 lockdown had left them without jobs and money.

The Centre had clarified that while the railways were bearing 85 per cent of the subsidy for the migrants, the states were to account for the remaining 15 per cent.

Advocate Prashant Bhushan, who appeared for the petitioner, told the bench of Justices Ashok Bhushan, Sanjay Kishan Kaul and Bhushan Gavai the migrants were in a pitiable situation because of the conflicting claims.

Justice Gavai referred to “reports” that the railways had decided to bear 85 per cent of the fare. The counsel said even if that were true, it would still be difficult for the migrants to account for the remaining 15 per cent and wondered why the railways should not bear this amount too.

Justice Kaul then asked Mehta if the Centre was actually funding 85 per cent of the fare. The solicitor-general said he had “no instructions” to reveal what proportion of the fares would be shared by the railways and the states. “I have not received instructions… in the entire country several trains, buses, depending upon their logistics, have been put into service,” Mehta told the bench.

Then bench then passed a written order disposing of the petition after noting that the government had fulfilled the petitioner’s main prayer for transporting the migrants to their native places.

“Mr Prashant Bhushan, learned counsel, has submitted that the migrants have to pay 15 per cent of the ticket fair which is not possible for them to bear at this moment.

“Mr Tushar Mehta, learned solicitor-general, has submitted that with regard to ticket fare the appropriate steps have to be taken by the railways and by the concerned state government. At this moment, no such statement can be made as to what amount is being taken from the migrant workers. He further submitted that the Union of India with the consultation of state government(s) and the railways are taking all necessary steps for movement of the migrant workers who are stranded..,” the bench observed.

“Necessary modalities for such transportation has to be implemented by the concerned states/Union Territories in collaboration with the railways. Insofar as charging of 15 per cent of railway tickets' amount from workers, it is not for this Court to issue any order under Article 32 (enforcement of fundamental rights) regarding the same, it is the concerned state/railways to take necessary steps under the relevant guidelines,” the bench said.

The court said the home ministry’s April 29 order —”subclause (iv) under Clause 17 on movement of persons” —had “allowed the movement” by directing all states/Union Territories to designate nodal authorities and develop standard protocols for receiving and sending such stranded persons.

“The main relief which was sought in the writ petition, thus, stood substantially satisfied by the aforesaid order. The order dated 01.05.2020 issued by the Ministry of Railways has also been placed before us where the Railways has decided to run ‘Shramik Special’ trains to move migrant workers, tourists, students and other persons stranded at different places due to the lockdown,” the bench said.

'Certain other difficulties have been pointed by Shri Prashant Bhushan with regard to stranded migrant workers…. The substantial relief in the writ petition having been fulfilled we cannot expand the scope of the writ petition to consider other issues sought to be raised by the learned counsel for the petitioners…. Taking note of the statement made by Shri Tushar Mehta, learned Solicitor General, and for the reasons as above the writ petition is closed,' Justice Bhushan, who dictated the written order, said.