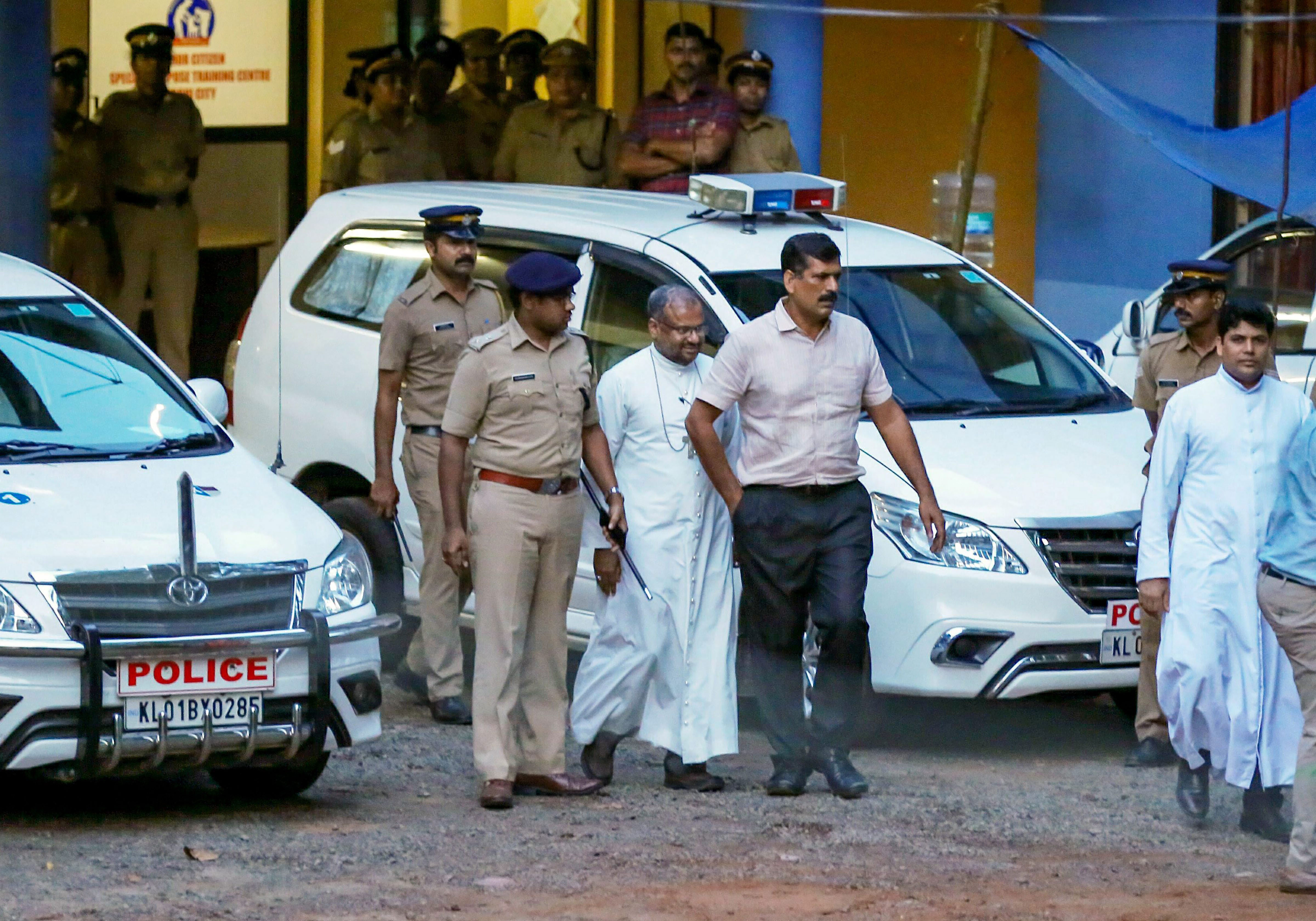 Bishop Franco Mulakkal, accused of raping a nun, was questioned for close to seven hours by Kerala police on Wednesday and allowed to leave, with police saying the interrogation would continue on Thursday.

Kottayam superintendent of police Harishankar told reporters: “We have issued notice (to Mulakkal) to appear before us at 11am tomorrow. He has been cooperating with us.”

Although he was scheduled to report to the crime branch office at Tripunithura in Ernakulam district at 10am, his emissaries took permission to postpone the meeting by an hour. The questioning started at 11.15am.

Sources said the 54-year-old bishop continued to claim innocence, as he had done when a Kerala police team questioned him for nine hours at Jalandhar, Punjab, on August 13.

Mulakkal had on Saturday stepped aside as bishop of the Jalandhar diocese following tremendous pressure from those seeking his arrest.

The 44-year-old nun has accused the bishop of raping her 13 times at a church facility in Kuravilangad, Kottayam district, between 2014 and 2016.

Mulakkal on Wednesday accused the nun of trying to frame him in a false case. The marathon questioning continued for close to seven hours. The bishop left around 6.30pm in the same car, with the police making way by dispersing protesters of the AIYF, the youth wing of the CPI.

Sources said the bishop kept claiming he was innocent, but did not give direct answers to questions. The interrogators asked him to give specific responses to some 100 questions they had prepared days ago.

The nun has accused Mulakkal of raping her for the first time on May 5, 2014, at the facility in Kuravilangad, but the bishop iterated that he did not visit the place on that day.

Mulakkal is said to have insisted that he had instead visited another church facility at Muthalakkulam in Idukki district.

Sources, however, said the police were in possession of the guest register of the facility in Kuravilangad in which an entry regarding the bishop’s visit on May 5, 2014, had been made.

The nun had said Mulakkal visited the Kuravilangad facility 13 times between 2014 and 2016, but the bishop said he went there nine times during that period and on none of the occasions did he stay the night.

Mulakkal dodged the large contingent of television cameras while entering the crime branch office. He was driven in an innocuous Volkswagen Polo car along with his public relations officer, Fr Peter Kavumpuram, and a lawyer.

The awaiting policemen guided the car into a parking slot kept ready for the vehicle and led the bishop into the interrogation room.

Only after his arrival did it become clear that the electronic media had been chasing the wrong car.

With no sign of the bishop, who was speculated to arrive at Kochi airport on Tuesday, journalists thronged the airport on Wednesday.

When they spotted the Toyota Innova of Mulakkal’s brother, Philip, taking the road to the city from the airport, they followed it.

Malayalam channels showed live footage of the Innova, tracking it in the belief that it was ferrying the bishop.

Only later did everyone realise it was a decoy as the bishop arrived at the crime branch office in the Polo and the Innova drove to his house.

The Polo had black screen on its windows, as a result of which the journalists could not spot Mulakkal as he was driven to the crime branch office, 9km from Ernakulam city.

There was no official word on how the bishop, who left by air from Chandigarh on Tuesday morning, reached Kerala.

Protesters held a march to the inspector-general’s office in Ernakulam demanding Mulakkal’s arrest around the same time he was being driven to the interrogation centre.

The rape survivor nun’s sister was hospitalised on Wednesday after she took ill on the third day of her hunger strike near Kerala High Court in Kochi demanding the bishop’s arrest.

Other activists continued their hunger strike at the same venue and promised not to stop until the bishop is arrested.