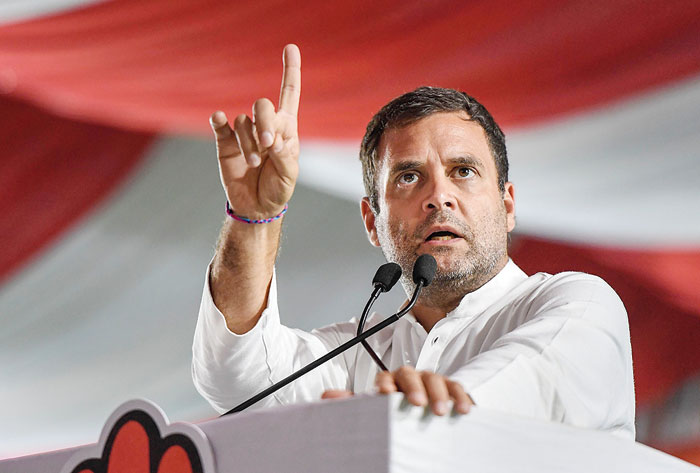 Rahul’s comment had come at a news conference on April 10, the day the court had agreed to review its own order that had dismissed petitions seeking a court-monitored probe into the Rafale deal.
File picture
Our Legal Correspondent   |   New Delhi   |   Published 14.11.19, 08:22 PM

The Supreme Court on Thursday closed contempt proceedings against Rahul Gandhi for alleging that it had endorsed his “chowkidar chor hai” remark against the Prime Minister in connection with the Rafale deal but cautioned that the Congress leader should be more careful.

The bench of Chief Justice Ranjan Gogoi and Justices Sanjay Kishan Kaul and K.M. Joseph accepted a second affidavit Rahul had filed where he had tendered an unconditional apology for his comment in the run-up to the general election earlier this summer.

The court said it was “unfortunate” that Rahul had made such statements “without verification” but “would not like to continue these proceedings further and, thus, close the contempt proceedings with a word of caution… to be more careful in future”.

Rahul’s comment had come at a news conference on April 10, the day the court had agreed to review its own order that had dismissed petitions seeking a court-monitored probe into the Rafale deal.

The court had then ruled that classified documents accessed by the media in connection with the deal could be admitted as evidence.

Served a notice, Rahul in an affidavit dated April 22 averred that the comments had been made on the basis of a bona fide belief and general understanding of the order although he himself had not read or analysed the court’s judgment.

The court had rejected the affidavit on the ground that it did not show any remorse for misinterpreting its judgment.

Rahul then filed an additional affidavit on May 8 saying he held the court in the “highest esteem and respect” and had never intended to interfere with the process of administration of justice.

He tendered an unconditional apology stating that the attribution was “entirely unintentional, non-wilful and inadvertent”.

The bench accepted his apology on Thursday. “We must note that it is unfortunate that without verification or even perusing as to what is the order passed, the contemnor (Rahul) deemed it appropriate to make statements as if this Court had given an imprimatur (official approval) to his allegations against the Prime Minister, which was far from the truth.

“This was not one sentence or a one-off observation

but a repeated statement in different manners conveying the same. No doubt the contemnor should have been far more careful,” Justice Kaul, who authored the judgment, said.

“The matter was compounded by filing a 20-page affidavit with a large number of documents annexed rather than simply accepting the mistake and giving an unconditional apology. Better wisdom dawned on the counsel only during the course of arguments thereafter when a subsequent affidavit dated 8.5.2019 was filed.

“We do believe that persons holding such important positions in the political spectrum must be more careful. As to what should be his campaign line is for a political

person to consider. However, this Court or for that matter no court should be dragged into this political discourse valid or invalid, while attributing aspects to the

Court which had never been held by the Court. Certainly Mr Gandhi needs to be more careful in future,” the judge said.