If the trunk didn’t contain cash, what was in it and whose vehicle took it away, asks Anand Sharma 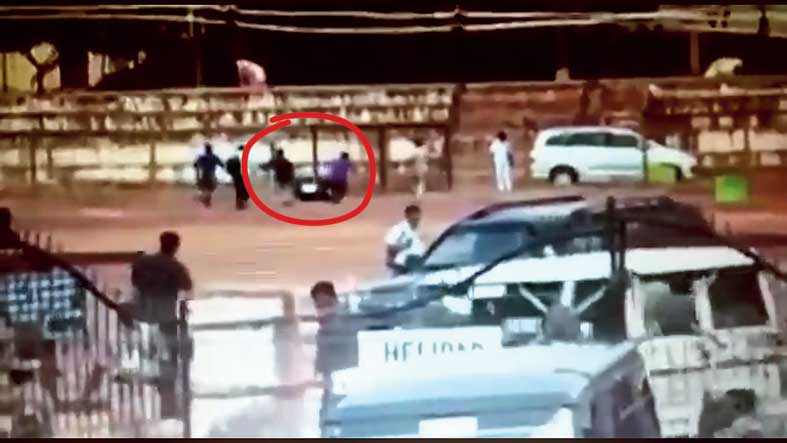 The Congress on Sunday lodged a formal complaint with the Election Commission seeking a probe into a video that shows a black-coloured box being loaded hurriedly into a minivan at a Karnataka helipad, allegedly just after Prime Minister Narendra Modi had landed there.

The video, which the Congress said was filmed just after Modi landed in Chitradurga in an air force helicopter to address a campaign rally, was shown by the party at a media conference in New Delhi on Sunday morning.

Senior Congress spokesperson Anand Sharma said: “If the trunk (box) didn’t contain cash, what was in it and whose vehicle took it away? The bluebook on security clearly says no heavy object can be put into a helicopter carrying the Prime Minister. Even in the aircraft carrying the Prime Minister, no item, not even water bottles, can be taken in without proper scrutiny and counting. The SPG knows what all are in the plane. The SPG should clarify what was the box about.”

Sharma added: “The blade of the helicopter was still rotating and the trunk was taken away in haste and put into a private vehicle that was not part of the PM’s convoy. We have been cabinet ministers and even our luggage was checked during elections. How can this box be placed in the PM’s helicopter without the SPG checking its content? No Prime Minister has ever done such a thing; this video of a box being taken away in this manner in election time is the first of its kind. There has to be a fair probe and the truth must be told to the nation.”

The video doesn’t show Modi or the body of the chopper or the box being unloaded. It shows the rotating blades in a corner and two sturdy men hurrying towards a white Innova with the box.

Sharma claimed that the incident had come to light at a time the BJP had allegedly been spending an unprecedented amount of cash and government agencies were selectively targeting the Opposition.

“This is also for the first time that the Election Commission had to summon the revenue secretary of the government of India and the chairman of the CBDT (Central Board of Direct Taxes) to ask about raids and remind them of the principle of level playing field,” Sharma said.

The Election Commission had told the agencies to keep it informed after raids were conducted on close aides of Madhya Pradesh chief minister Kamal Nath, a Congress veteran, and some functionaries of the party in Delhi. In several states, Opposition leaders have faced raids during the ongoing Lok Sabha polls, prompting cries of vindictive politics.

Sharma urged Modi to formally counter what former French President Francois Hollande was quoted as saying on the Rafale deal. Hollande had been quoted in the French media as saying that Anil Ambani was chosen as an offset partner in the Rafale deal on the suggestion of the Indian government.

“The Prime Minister has to formally contradict this before the election. He should release the minutes of his conversation with Hollande that took place in Paris on April 10, 2015,” Sharma said.

The Congress has promised a probe by a joint parliamentary committee into the Rafale deal if it comes to power.