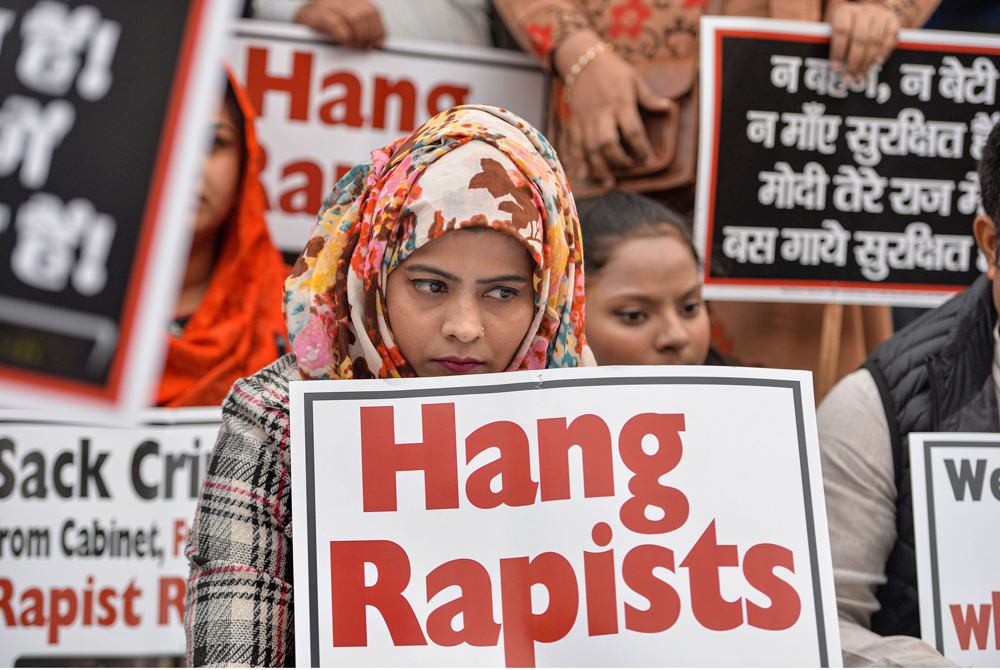 Activists hold placards as they participate in a silent protest demanding the Centre to create a strong system of deterrence punishment to rapists in the country, at Rajiv Chowk in New Delhi, Friday, December 6, 2019.
(PTI)
Our Special Correspondent   |   New Delhi   |   Published 06.12.19, 09:42 PM

The Congress on Thursday expressed shock at Prime Minister Narendra Modi’s silence on the alarming rise in crimes against women and wondered whether his government had only lofty slogans to offer on security.

Congress spokesperson and Rajya Sabha member Ami Yagnik told a media conference: “The Prime Minister, who speaks and tweets on everything, has not spoken a word on this menace even as girls are being raped, murdered and burnt all around. Is he not worried that women of our country have to face this? The home minister (Amit Shah) too is silent.”

Another Congress spokesperson, Ragini Nayak, said: “Modiji said ‘bahut hua naari pe waar/abki bar Modi sarkar (enough of atrocities against women, this time there will be a Modi government)’. He also said ‘beti bachao, beti padhao (save the girl, educate her)’. Does this government have anything other than empty slogans for security and empowerment of women?”

Referring to minister Smriti Irani’s outburst and the adjournment of Lok Sabha proceedings over “misbehaviour” with her during a debate, Ragini said: “Women and child development minister Smriti Irani is agitated about her own prestige, not concerned about the families of girls who have been raped and killed. She didn’t utter a word about their anguish and pain.”

“How did the second incident happen in Unnao? This would not have happened if the BJP didn’t try to give protection to its MLA Kuldeep Singh Sengar who is in jail on rape charge. The Supreme Court ordered completion of trial in 45 days but nothing has happened after 80 days.”

Ragini added: “Swami Chinmayanand, accused of rape, is sent to hospital and the victim is sent to jail. This would happen nowhere in the world. What steps have the government taken to improve women’s safety? Nirbhaya funds (to ensure women’s safety) have not been used; states are returning the money. What happened to one-stop centres to deal with crimes against women?”