Congress leaders ask farmers not to resort to violence 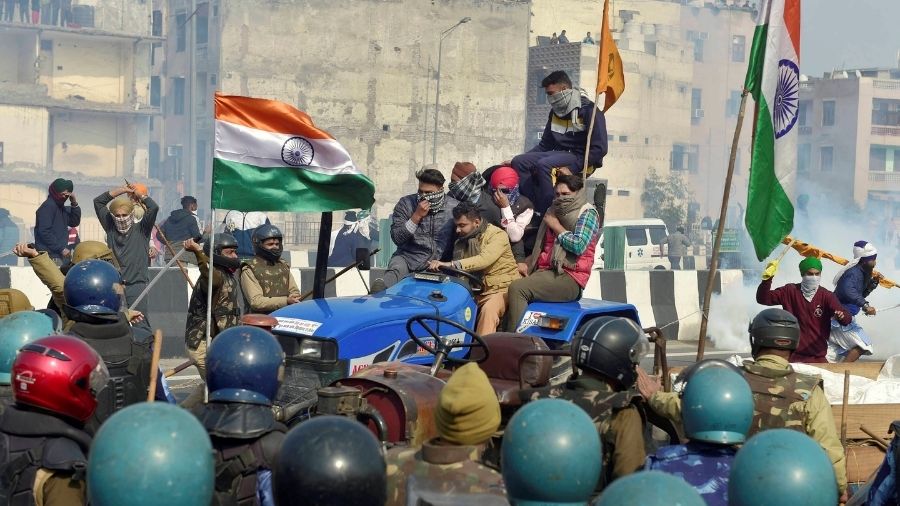 Delhi Police use teargas as farmers try to break barricades near Akshardham during their tractor parade on Tuesday, in New Delhi.
PTI
Our Bureau And Agencies   |   New Delhi   |   Published 26.01.21, 04:22 PM

Violence is not the solution to any problem, Congress leader Rahul Gandhi said as the Delhi Police clashed with protesting farmers on Tuesday amid their tractor rally, at several places in the national capital.

Taking to Twitter, he said that if anyone gets hurt the damage will be inflicted to the country, after violence broke out during the tractor parade by protesters against the new farm laws.

“Violence is not the solution to any problem. If anyone gets hurt, the damage will be done to our country. Take back the anti-agricultural laws in national interest,” he said in a tweet in Hindi.

Deviating from the designated route for the tractor parade, protesting farmers entered the Red Fort and hoisted flags from some domes of the iconic monument in the national capital.

They earlier clashed with the police at ITO while trying to enter Lutyens Delhi. The police used tear gas shells and lathi-charge to dispel the protesters.

The farmers, who began their march from different border points, much before the time permitted for their tractor rally, reached ITO in Central Delhi, though their leaders had earlier agreed not to enter central Delhi.

The Congress also tweeted a video showing smoke from tear gas shells lobbed at farmers to stop them from entering Delhi.

“Republic Day 2021 in New India. Our national capital is up in smoke as the government attacks its own people,” the party said on its official Twitter handle along with the video.

The opposition party also said that it is standing strongly behind the farmers in their protest against the farm laws.

Echoing Gandhi’s stand, Rajasthan chief minister Ashok Gehlot on Tuesday appealed to the protesting farmers to maintain peace and not resort to violence.

He said there was no place for violence in a democracy.

“The farmers’ movement has been peaceful till now. I appeal to the farmers to maintain peace and not to commit violence. Violence has no place in democracy,” Gehlot tweeted.

He said resorting to violence will lead to the success of the forces that are trying to make the farmers’ movement unsuccessful.