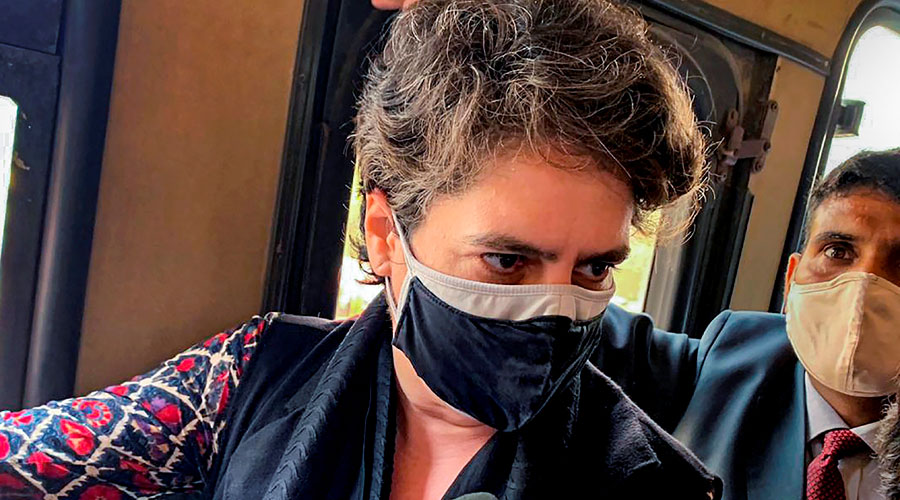 Congress General Secretary Priyanka Gandhi Vadra held a review meeting with party leaders here on Saturday during which discussions were held on several issues, including the farmers' protest over the three agri laws.

In a statement, the party said deliberations were held on the poll strategy for western UP and Gandhi sought reports from every village.

The farmers' protest over the three agri laws also came up for discussions, the statement said.

Thousands of farmers from Uttar Pradesh and neighbouring states had gathered at Muzaffarnagar on Sunday for a 'Kisan Mahapanchayat', months ahead of the crucial UP assembly polls.

The event was organised by the Samyukt Kisan Morcha (SKM) at the Government Inter College ground in Muzaffarnagar to protest the Centre's three farm laws.

In another meeting held for state's Ruhelkhand zone, Gandhi said a strong organisation is needed not only for the party but also for nation building.

She also urged the party workers to work for 24 hours during the elections.

On Friday, the Congress decided to take out a 12,000 km-long yatra through villages and towns of Uttar Pradesh ahead of the assembly polls next year.

The decision to take out the "Congress Pratigya Yatra:Hum Vachan Nibhayenge" was taken at a meeting presided over by Gandhi, and attended by members of the party's advisory and strategy committee here, the Congress had said in a statement.

Priyanka had arrived here on Thursday to review the party's preparations in the run up to the polls.

The yatra will draw attention of people to issues of corruption, inflation, crime, violence against women, unemployment and poor health services, the party said on Friday.

During the yatra, Congress leaders will assure people that they will fulfil promises made by the party in the run up to the polls.

Gandhi held discussions about routes and issues that will be taken up during the yatra, the party said.