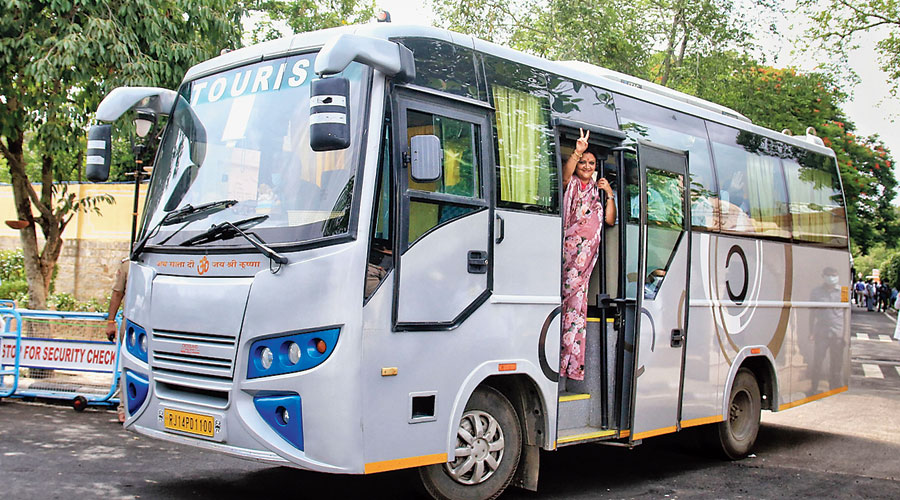 The Congress has doused the rebellion in Rajasthan with timely and deft political manoeuvring while keeping the doors open for the saboteur Sachin Pilot to return without setting conditions.

The Congress moved cautiously by first securing the numbers to save its government in case of defections and then approached Pilot to convince him that a revolt would be futile. Rahul Gandhi spoke to him on the phone and asked him to attend the legislature party meeting in Jaipur and make his point there.

Sources said Rahul asked Pilot to let bygones be bygones, suggesting that his rebellion would not be held against him in future, but warned him against dragging internal issues outside party forums.

Senior leaders Ahmed Patel, P. Chidambaram, Priyanka Gandhi Vadra and the general secretary in charge of the organisation, K.C. Venugopal, too spoke to the deputy chief minister and asked him to return.

Sources said Pilot stuck to his ground, declaring that he could not work with chief minister Ashok Gehlot. Pilot’s antipathy towards Gehlot is not a secret in the Congress and all the leaders who spoke to him stressed the need to work together in the larger interest of the party instead of being a prisoner of personal biases.

Pilot, who denied reports that he was planning to join the BJP, had till Monday evening not given any indication of a change of heart. The Congress is willing to wait for a couple of days but the dominant view is that he cannot dictate terms to the party and will have to return without setting conditions.

Another meeting of the legislature party has been called at 10am on Tuesday to give the rebels a chance to return.

Sources close to Pilot said 19 MLAs had failed to turn up at Monday’s meeting and the government was in a minority. Gehlot’s camp followers said 109 MLAs were with them and three more were in touch. The majority mark in the House of 200 is 101.

It is not open to dispute that Pilot has lost this round to Gehlot and damaged his prospects in the party through his impatience and ill-planned revolt. The Congress leadership is furious, arguing that such blackmail is not expected of a mature leader in whom the party has invested so heavily.

But the party still wants to forgive him. While this soft approach is driven by pragmatism to keep the Rajasthan government secure, there is also the “emotional connect” that many leaders have with Rajesh Pilot’s son.

Ashok Gehlot (left) and Randeep Surjewala at a meeting with MLAs in Jaipur on Monday.
PTI

The Congress has made it clear that it is dealing with the rebel from a position of strength. While the party showed its aggressive intent by holding a news conference at Jaipur at 2.30am, spokesperson Randeep Surjewala sent out a firm message hours later in the morning.

Surjewala said: “Differences within the party are legitimate but weakening the elected government and creating (an) opportunity for the BJP to engineer defections is not acceptable. If you are angry, you talk to the family members and resolve the matter. You don’t hurt the family. I am saying this on behalf of Sonia Gandhi, Rahul Gandhi and the party -- come and discuss your concerns within the party forum. We will resolve (the) issues. But don’t take the matter this far.”

A resolution passed at the legislature party meeting reposed faith in the leadership of Sonia Gandhi, Rahul and Gehlot and accused the BJP of hatching a conspiracy to destabilise an elected government.

The resolution added: “Strong disciplinary action should be taken against any office-bearer or member of the legislature party if they are directly or indirectly part of this conspiracy.”

Sources said Pilot had made three failed attempts to destabilise the government since March.

Hoardings bearing Pilot’s photograph were removed from the party headquarters in Jaipur in the morning but restored within hours as the leadership wanted to keep the doors open. The Congress took its MLAs to a five-star hotel to minimise the possibility of poaching. The chief minister and the central observers accompanied the MLAs in buses to the hotel.

The BJP, which pretended to be aloof, asked for a floor test in the evening. Earlier in the day, the income-tax department had raided Gehlot’s aides.

Surjewala said: “The BJP’s frontal outfits, income tax and Enforcement Directorate, too have come to Rajasthan. When will the CBI come? But we warn the BJP that all these efforts will fall flat as the government is stable.”