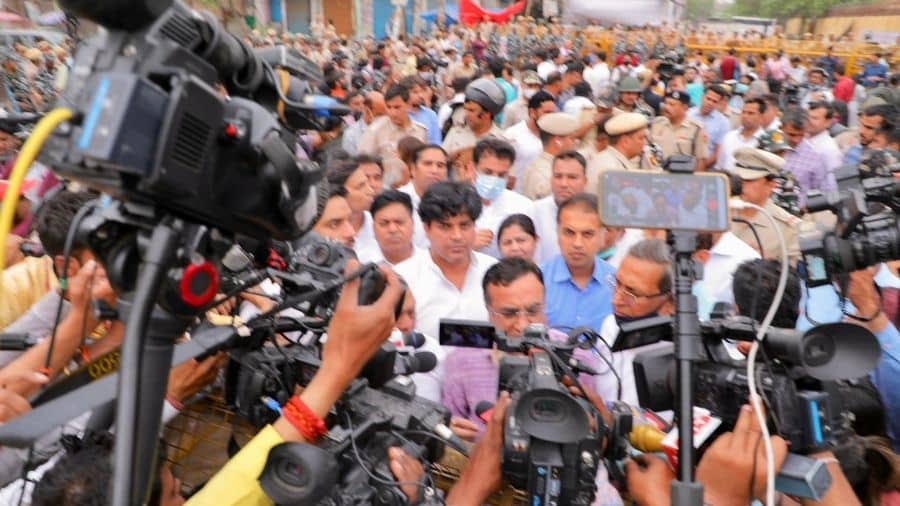 A delegation of Congress leaders visited violence-hit Jahangirpuri on Thursday but was stopped by the police from going to the area where an anti-encroachment drive was conducted by the North MCD a day before.

The demolition drive conducted by the North Delhi Municipal Corporation to remove encroachments was stopped following a Supreme Court on Wednesday.

Maken told reporters that the drive was an attack on the poor people and their means of livelihood.

Citing court judgements, he said the drive was conducted by violating the rules.

"This demolition is illegal. I was an urban development minister too, and I know how laws work. They cannot do this without any prior notice. BJP leaders are lying," Maken said.

Gohil also hit out at the BJP, saying the anti encroachment drive was an attempt to divert attention from rising inflation in the country.

Delhi Congress president Anil Kumar asked why has the chief minister not visited the area.

"How come bulldozers are being allowed when there's section 144 imposed here. One sided action that is being taken. They are targeting Muslims. We are here to ensure they get justice," he said.

Several senior leaders of Delhi Congress were also part of the delegation.

Some leaders, including Anil Kumar, sat on dharna at the spot but were asked by the police to move.

The area witnessed violent clashes, including stone pelting, arson and firing, between two communities during a Hanuman Jayanti procession on Saturday. Eight police personnel and a local resident had sustained injuries.

It said the delegation comprising sitting and former members of parliament has been formed on the instruction of party chief Akhilesh Yadav.