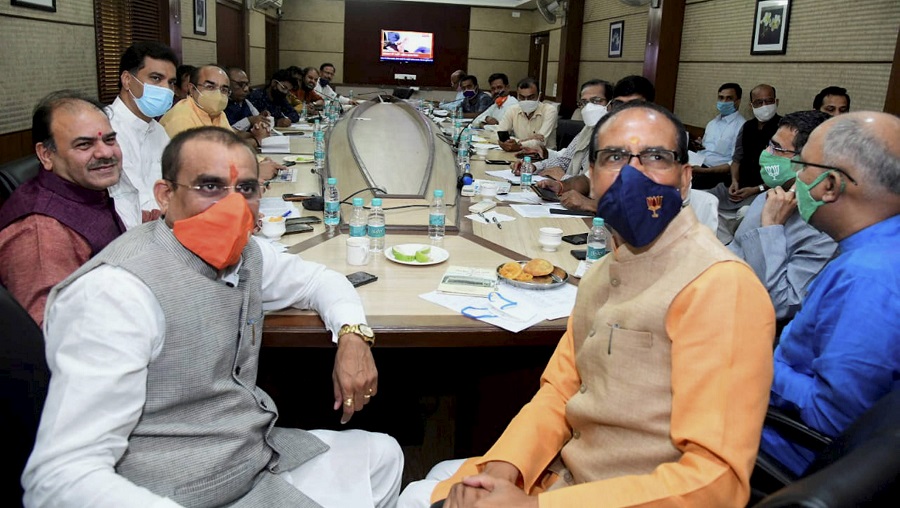 Congress and BJP supporters clashed at a polling booth in Madhya Pradesh even as voting was underway for by-elections in 28 Assembly seats of the state on Tuesday, officials said.

One person was injured in the clash, they said.

A total of 26.86 per cent voters exercised their franchise till 12 pm on Tuesday, an election official said.

BJP's Rajya Sabha member Jyotiraditya Scindia, who quit the Congress in March this year and joined the saffron party, cast his vote at a booth in Gwalior district.

Former MP chief minister Kamal Nath and other senior Congress leaders, including Digvijaya Singh, were monitoring the polling from a control room set up at the state party office in Bhopal.

In Morena district, Congress and BJP supporters clashed at Jatavara polling booth and an unidentified person fired a bullet during the incident, Superintendent of Police Anurag Sujania said.

"A person was injured but it was not clear whether he received the injury due to the gun shot or was hit by a stick. It will be clear only after medical examination. The injured person was referred to the district hospital for treatment," the official said.

Polling began in the 28 constituencies at 7 am with Covid-19 prevention protocols in place and will continue till 6 pm, an election official said.

The last hour of voting will be for Covid-19 patients and people suspected to be suffering from the disease, he said.

Altogether 355 candidates, including 12 ministers, are in the fray, the official said, adding around 33,000 security personnel have been deployed in 19 districts.

There are 63.67 lakh voters in the 28 constituencies and 9361 polling booths, including 3038 booths placed under the critical category, he said.

The by-elections in Madhya Pradesh were necessitated after 22 MLAs of the erstwhile Congress government switched over to the BJP in March this year, leading to the fall of Kamal Nath's 15-month-old government.

Three other Congress MLAs followed the lead of Scindia and his supporters, and joined the BJP. Another three seats in the Assembly are vacant due to the deaths of incumbent MLAs.

Campaigning for the bypolls was marked by acrimonious exchanges between the main rivals BJP and Congress.

It is for the first time in Madhya Pradesh that bypolls are being held in as many as 28 Assembly seats in the 230-member House in one go, an official said.

Congress MLAs who quit from 25 seats are now in the fray as BJP candidates. One more Congress MLA resigned recently.

The BJP currently has 107 MLAs, while the Congress has 87 legislators in the House.

The counting of votes will take place on November 10.