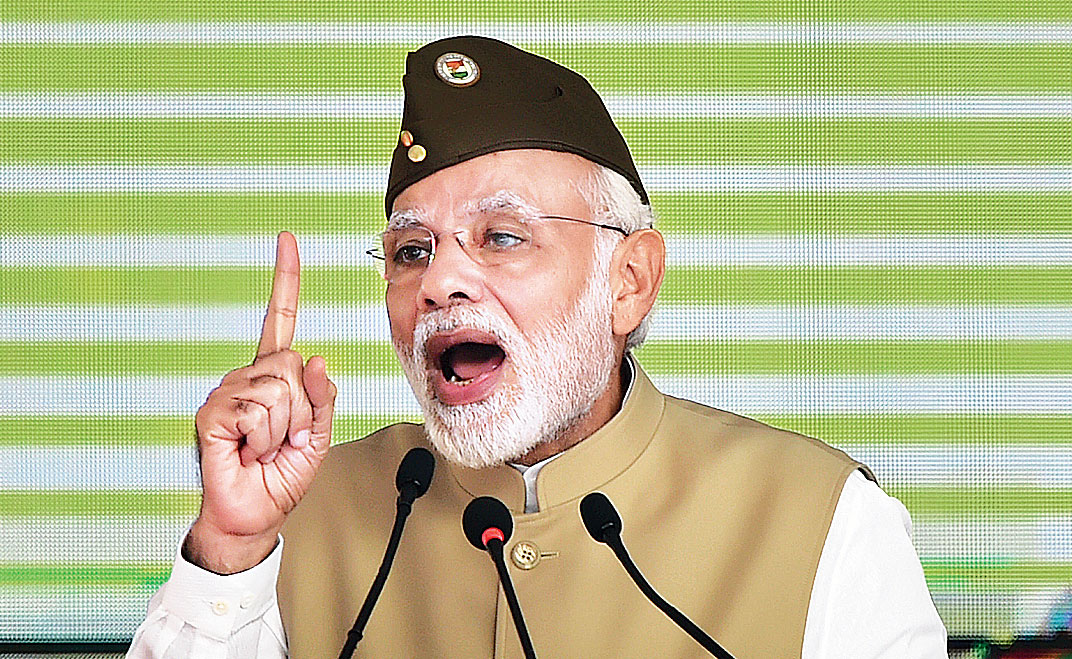 “It is unfortunate that we have a Prime Minister who does 24x7 politicking. Even on auspicious occasions, he uses national icons to attack Jawaharlal Nehru. Does this behove a Prime Minister?” Congress spokesperson Abhishek Singhvi said.

“The Sangh parivar and its elements had no role in the freedom struggle. The legacy-less BJP is like a fish out of water in the context of the freedom movement; hence they are desperate to appropriate Congress icons.”

Singhvi added: “If Modi doesn’t know the history of India, his aides should brief him properly. He always talks of an imagined rivalry between Nehru and Netaji. This distortion is for cheap political sensationalism. He forgets what Sardar Patel said about the RSS; and Netaji’s politics and the RSS philosophy are as different as chalk and cheese.”

Modi, while commemorating the 75th anniversary of Bose’s declaration of an Azad Hind government, had accused the Congress of ignoring stalwarts of the freedom struggle like Netaji to promote the Nehru-Gandhis.

“We reject this vitriolic and diabolical design of the Modi government to defame national icons. Netaji and Sardar Patel were completely against the philosophy of sectarianism and bigotry that is espoused by the RSS and the Hindu Mahasabha,” Singhvi said.

He pointed to an article titled “Congress and communal organisations” that Bose had written on May 4, 1940.

“There was a time, not long ago, when leaders of the Congress could be members of communal organisations like the Hindu Mahasabha and the Muslim League…. But in recent times, circumstances have changed,” Singhvi said.

Singhvi added: “When Netaji was revamping the Azad Hind Fauj in Japan and Gandhiji had given the ‘Quit India’ call, the RSS and the Hindu Mahasabha were hand in glove with the British. The Hindu Mahasabha, under Savarkar’s leadership, organised recruitment camps for the British armed forces. The same British army massacred INA cadets later.

“A letter dated March 24, 1936, by then RSS chief M.S. Golwalkar to RSS spokesperson Krishna Rao Wadekar is a case in point. He wrote, ‘The Sangh should stay away from movements born out of fleeting moments of enthusiasm and emotion. The programme was born out of momentary enthusiasm and outburst of mercurial emotions.’ Golwalkar described all attempts to overthrow the British rulers as ‘shallow nationalism’.”

Singhvi quoted from Patel’s July 18, 1848, letter to Jana Sangh leader Syama Prasad Mookerjee: “As regards the RSS and the Hindu Mahasabha, the case relating to Gandhiji’s murder is sub judice and I should not like to say anything about the participation of the two organisations, but our reports do confirm that, as a result of the activities of these two bodies, particularly the former, an atmosphere was created in the country in which such a ghastly tragedy became possible. There is no doubt in my mind that the extreme section of the Hindu Mahasabha was involved in the conspiracy.”

Singh contested the perception that the Congress had ignored Bose.

“In August 1947, Nehru said while raising the Indian flag after (the attainment of) freedom, ‘I wish Netaji was here.’ It was Nehru who defended INA members in the Red Fort trials. The declassified ‘Netaji Files’ reveal how Nehru and chief minister B.C. Roy took care of Subhas Chandra Bose’s family,” he said.

“On January 23, 1947, Sarat Chandra Bose (Netaji’s brother) dedicated Netaji’s historic house to the nation, and in 1957 the Congress government encouraged the establishment of the Netaji Research Bureau in Calcutta.”

Singhvi added: “In 1975, under Indira Gandhi, the Congress released the proceedings of the First Netaji International Seminar…. In 1998, the Netaji Museum was refurbished and redesigned. In 1985, the Congress government under Rajiv Gandhi established the INA Martyrs’ Memorial complex at Moirang in Manipur.”

“In 2005, the UPA established a Netaji Museum in Kurseong, Darjeeling, that houses pictures and documents related to great historical events like the Haripura Congress session, (Bose’s) interactions with Rabindranath Tagore and Jawaharlal Nehru, the Indian National Army, participation of the hill people in the Indian national movement. In 2007, the Congress-UPA government reconstructed his ancestral home and converted it into a museum in Cuttack, Odisha.”