Director-general Dilbag Singh said a joint police and CRPF team enforcing the Covid lockdown was fired upon by Lashkar-e-Toiba in Sopore town around 11.30am 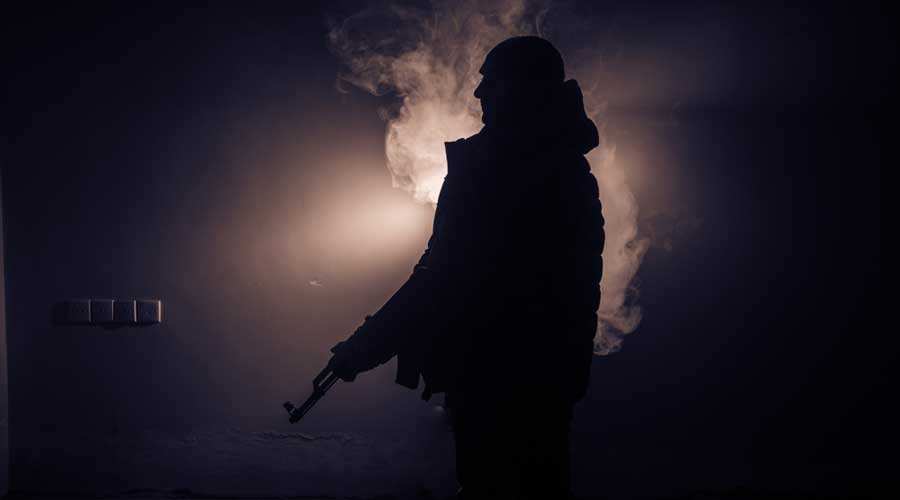 Police sources said the militants had opened indiscriminate fire on a police gypsy, during which the vehicle suffered extensive damage.
Shutterstock
Muzaffar Raina   |   Srinagar   |   Published 13.06.21, 01:11 AM

A militant attack on a police team followed by an exchange of fire left two cops and two civilians dead and three injured in north Kashmir’s Sopore town on Saturday.

The Jammu and Kashmir administration and police blamed militants for the civilian deaths. Dozens of women mourners, however, raised slogans in favour of azaadi (freedom) and militants and against the police during the funerals of two of the dead, baring the anger in the Valley against the government and embarrassing the administration of lieutenant governor Manoj Sinha.

Director-general of police Dilbag Singh said a joint police and CRPF team enforcing the Covid lockdown was fired upon by Lashkar-e-Toiba militants in the main Sopore town around 11.30am.

“A police party led by sub-inspector Mukesh Kumar was fired upon. They retaliated with fire. During all this, some policemen got injured. Some civilian fruit vendors were also hit. Subsequently, two injured policemen — constables Wasim and Showkat — succumbed,” the DGP told reporters in Srinagar.

The police have identified the slain policemen as constables Wasim Ahmed Bhat and Showkat Ahmed Parray, both from Budgam district of central Kashmir. The dead civilians are Bashir Ahmad Khan and Showkat Ahmad Shalla, both from Sopore.

Police sources said the militants had opened indiscriminate fire on a police gypsy, during which the vehicle suffered extensive damage.

While the security personnel retaliated, it is not clear how the civilians died.

A video posted by a local photojournalist on his Facebook page showed women mourning the death of constable Wasim Ahmad, raising pro-azaadi and anti-India slogans at his Narbal home on Srinagar’s outskirts.

A woman was seen trying to stop the others from chanting such slogans but they are unrelenting.

During civilian Bashir Ahmad’s funeral in Sopore, eyewitnesses said women protesters, including some family members of the dead, converged outside the graveyard and raised pro-azaadi and anti-police slogans.

Such protests are now rare in Kashmir because of the government’s zero tolerance of all forms of dissent. The police routinely book people for raising pro-azaadi slogans under the stringent anti-terror law UAPA.

The Jammu and Kashmir administration and Valley-based pro-India parties condemned the militant attack and the deaths.

“Strongly condemn the terror attack on civilians and security personnel at Sopore, Baramulla. My sincere condolences to the families who have lost their loved ones in this attack. Praying for the early recovery of the injured,” lieutenant governor Sinha tweeted.

“Guns cannot solve the issue of Jammu and Kashmir. It can neither be solved by Delhi’s gun nor by the gun of our youth here. It will further deteriorate the issue and malign people in Jammu and Kashmir, and (in) the name of (tackling) terrorism more force (will be) used here,” the People’s Democratic Party leader said.

National Conference leader and former chief minister Omar Abdullah tweeted: “Terrible news coming in from Sopore. Such attacks must be condemned without reservations. Prayers for the injured & condolences to the families of the deceased.”

Terrible news coming in from Sopore. Such attacks must be condemned without reservation. Prayers for the injured & condolences to the families of the deceased. https://t.co/MzsnpHxKSQ

Militant attacks in the Valley have shown no let up despite claims by the security forces to the contrary. Militants this month killed BJP leader Rakesh Pandita, a Kashmiri Pandit and chairman of the Tral municipal committee.

DGP Singh on Saturday claimed militancy was on the decline. “We have good control over the situation,” he said.