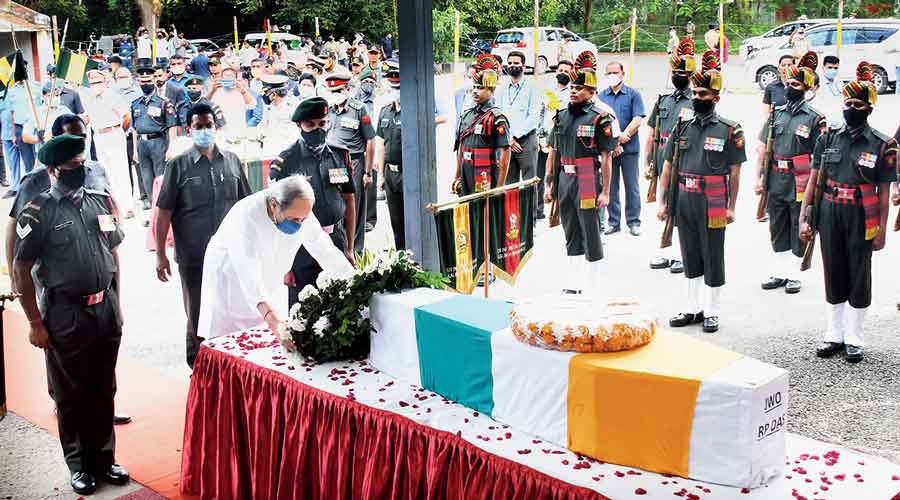 Thousands of people from different walks of society turned up at Krushna Chandrapur, a nondescript village in the Talcher coal belt, on Saturday to pay their last respects to junior warrant officer of Indian Air Force, Rana Pratap Das, who was killed  along with General Bipin Rawat in the chopper crash near Coonoor in Tamil Nadu.

The MI-17V5 chopper, carrying General Rawat, his wife and 12 others, crashed on Wednesday.

Slogans of Bharat mata ki jai rent the air as the body was taken to the crematorium. It was consigned to the flame at 5.35pm after the ceremonial guard of honour. Huge billboards with pictures of Rana Pratap were lined up along the road leading to his village.

When Rana’s 68-year old father Srivastha Das and sister Sushree came to pay their last respects, there were many moist eyes in the gathering. His father, who is undergoing treatment for heart-related ailments, cried inconsolably. Relatives had to carry him away from the spot.

“It is difficult to console  my father-in-law. As he is suffering from heart ailments, we are concerned about his health,” said Atanu Patnaik, the brother-in-law of Rana. His only sister Sushree did not speak, She was seen consoling her mother who is suffering from dementia.

Rana’s widow Subhangi,  with her one-and-a-half-year-old son, watched the proceedings in complete silence.

When the body reached Biju Patnaik Airport here in the morning, chief minister Naveen Patnaik and other ministers turned up to pay their respect to the departed soul.